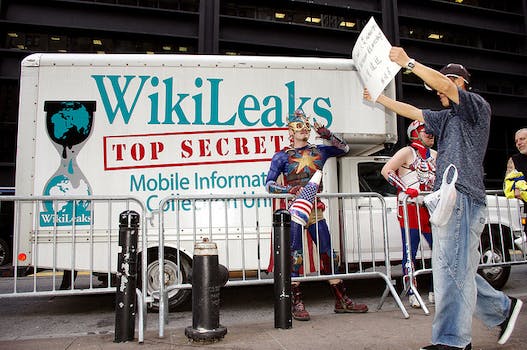 Now you can be the proud owner of the '96 Ford that started it all.

Grab yourself a piece of history on eBay! Clark Stoeckley, WikiLeaks supporter and self-described “artivist,” is selling his most famous creation: the fabled WikiLeaks truck.

Created as a mobile art project, the truck ended up serving Occupy Wall Street well in the role of designated hauler and truck-of-all-trades.

“I deliver everything except laundry,” Stoeckley previously told the Daily Dot, adding that “driving it and parking it is my performance.”

Bailing it out of impound after the cops confiscated it became an accidental performance art piece. The NYPD claimed at first that they couldn’t find  the vehicle, and the snafu went viral.

Eventually the truck turned up, and now it’s on eBay.

The listing reads in part:

So far, it’s had nearly 3,000 views but not one bid. Strange, you’d think a ’96 Ford in good condition would be worth far more than the minimum $7500, even without the illustrious provenance.

Then again, not everyone is up for getting heckled by every stockbroker and 1% quisling on the planet. You have six more days to bid.