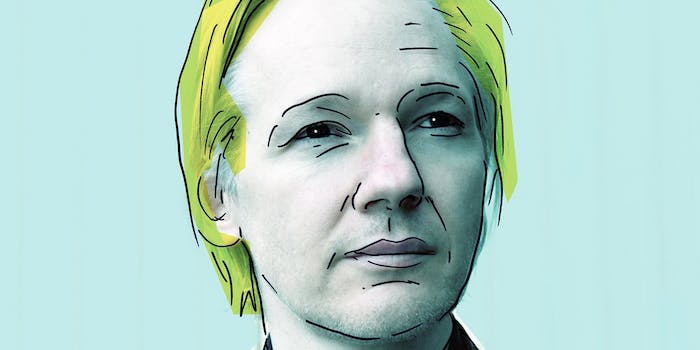 It's transparency at any cost.

This week, WikiLeaks released yet another batch of thousands of emails from the hack of Sony Pictures last November. The 276,394 documents more than doubles the number of emails, memos, presentations, and budgets the Julian Assange-led website has gathered into an easy, searchable format for researchers and journalists to scour the inner details of Sony’s inner workings.

While the wholesale publishing of private corporate documents might seem reckless, it’s far from the first time WikiLeaks has embraced chaos in favor of transparency for transparency’s sake.

After all, the documents released by the so-called “Guardians of Peace” responsible for the Sony hack have been more than well-covered by the media. Last November and December were dominated by snarky coverage of the salacious details: who was racist, who was paid less than her male counterparts, and which celebrities were the most despised among the suits.

WikiLeaks’ continued publishing of stolen documents that have been widely available for nearly seven months, thus, seems not just ethically dubious but gratuitous.

If WikiLeaks were a House in Westeros, “Ethically Dubious And Gratuitous” would be printed on their sigil. The site—and its founder, Assange—have been criticized for a complete lack of editorial discretion between leaked documents that might be newsworthy and those that could put innocent people’s careers—and lives—in jeopardy.

If WikiLeaks were a House in Westeros, “Ethically Dubious And Gratuitous” would be printed on their sigil.

While the situation at Sony isn’t endangering the lives of its employees, WikiLeaks complete lack of concern for the real people whose livelihood it challenges with these documents puts them on no more of a moral high ground than the original hackers who stole them.

Unlike the hackers, however, Assange has no true goal. The Guardians of Peace (supposedly) hacked Sony Pictures as an arm of North Korea’s elite cyberwarfare unit in an attempt to get the studio to censor the Seth Rogen–James Franco picture The Interview.

Assange now releases these documents in the vague name of “transparency.” Their newsworthiness is questionable: Most of the meaty stories about studios enforcing anti-piracy law through state governments and the gritty business of how a Hollywood movie is made have been well-tread territory since November.

Expecting such concern from Assange is rather ridiculous. Time and again, WikiLeaks has proven itself to be a valuable asset to journalists and whistleblowers, but it’s also revealed its own behavior to be free of responsibility or even moral oversight.

The Sony documents are only the latest in an ongoing saga of obtaining large amounts of data and having no idea what to do with it other than share it with the world. The news media is ideally most useful when it sifts through the world’s information and reports what’s interesting. WikiLeaks is frequently the source of that information, but it often fails to do the sifting. It’s especially galling because—unlike their previous leaks—this isn’t a trove of government documents. It’s private correspondence.

Assange’s most famous leak, of State Department cables in 2010, was originally a work of collaboration between WikiLeaks and respected media properties like the New York Times, Der Spiegel, and Le Monde. The editors of those papers worked with Assange to redact sensitive information while still publishing vital information about governments, corporations, and international entities like NATO, the European Union, the United Nations, and the Vatican.

Time and again, Wikileaks has proven itself to be a valuable asset to journalists and whistleblowers, but it’s also revealed its own behavior to be free of responsibility or even moral oversight.

Due to the editorial oversight Assange sought in publishing the State Department cables, the entire operation was an unmitigated success for WikiLeaks and the publications that assisted it. WikiLeaks became a symbol of the power of transparency and effective journalism.

Most journalists lept to the defense of Assange. “If secrecy is necessary for national security and effective diplomacy,” wrote The Economist in a widely circulated article, “it is also inevitable that the prerogative of secrecy will be used to hide the misdeeds of the permanent state and its privileged agents.”

With the same heedless abandon with which they’ve been publishing the Sony emails, WikiLeaks followed all the wonderful praise of their State Department work by publishing all of the diplomatic cables with absolutely no redactions. In contrast to the positive praise WikiLeaks received for the initial, edited release, Assange was roundly condemned by more than just government officials. The five initial newspapers with which he worked to publish the cables immediately turned on him.

“Our previous dealings with WikiLeaks were on the clear basis that we would only publish cables which had been subjected to a thorough joint editing and clearance process,” they wrote in a joint letter. “We will continue to defend our previous collaborative publishing endeavor. We cannot defend the needless publication of the complete data—indeed, we are united in condemning it.

One would suggest this should have been a lesson for WikiLeaks, but it’s an organization that can largely exist without consequence. After the State Department leaks, the site lost the ability to accept donations, as well as its Amazon hosting service, and was even subjected to DDoS attacks, yet it emerged from the onslaught largely unharmed. Assange himself is in exile in Ecuador, far away from extradition treaties, avoiding both charges related to the leaks and alleged sexual misconduct in Sweden.

Expecting Wikileaks to learn from its past in any meaningful way is like expecting a dog to learn without rubbing his nose in the carpet.

I go back to the State Department leaks because it’s when Assange revealed his true colors not as an organized activist or ideologue but as a somewhat anarchic purveyor of information. Assange all but confessed this in an article for Newsweek entitled “Why I Founded WikiLeaks,” in which he expresses his disdain for what he calls “unhelpful philosophical discussion about why I want to do something. It is enough that I do.”

WikiLeaks is frequently the source of that information, but it often fails to do the sifting.

Criticizing him for the Sony hack would be fighting a seemingly unstoppable force. Assange has proven himself rather immune to the concerns of lowly government employees or even mere ethics. He seems to prefer opening up the torsos of society’s most storied institutions and showing the rest of us their innards, regardless of whether anyone asked to see it or not.

Photo via Mataparda/Flickr (CC BY 2.0)