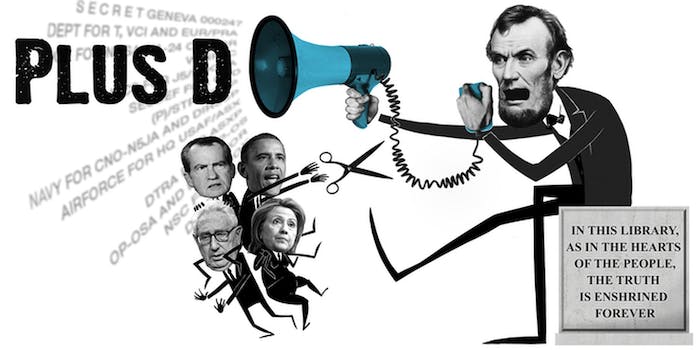 The "Kissinger Cables" include diplomatic and intelligence documents from 1973-1976, during Henry Kissinger's time as Secretary of State.

The bulk of the release is a group of diplomatic and intelligence documents from the 1970s,  billed as “the Kissinger Cables.”

“The new records,” wrote the Australian, “dating from the beginning of 1973 to the end of 1976, have not been leaked and are available to view at the US national archives. They include many communications which were sent by or to then U.S. secretary of state Henry Kissinger.”

The work on these documents, readying them for release, has been done largely by Julian Assange, who has been hiding in the Ecuadorian embassy in London for nine months to avoid deportation to Sweden on sexual violence charges.

Unlike “Cablegate,” the group of about 250,000 leaked diplomatic cables dating from 2003 to 2010 that initially made WikiLeaks famous, the Kissinger release also includes WikiLeaks’“detailed analysis” of the documents

The documents are part of the organization’s new  “Public Library of U.S. Diplomacy” (PlusD), which WikiLeaks describes as  “the world’s largest searchable collection of United States confidential, or formerly confidential, diplomatic communications.”

Assange described PlusD to the press as, “What Google should be like.”

The announcement of the Kissinger release and new database comes less than a week after former WikiLeaks staffer Daniel Domscheit-Berg  criticized the organization for focusing more on “hype” than actual analysis.

Domscheit-Berg praised the International Consortium of Investigative Journalists (ICIJ) for their recent work on shell companies and tax havens, based on 2.5 million leaked documents, calling their work “a professional and properly structured preparation of leaks.”

H/T The Australian | Illustration from WikiLeaks