Why talk to your significant other when you can disrupt their Internet connection?

It’s night time, the right time, and you’re thinking you’d really like to cap the day off with some marital intercourse. Except your wife is lying in bed scrolling through Facebook. What a bitch!

It’s decision time, my man. Do you:

If you chose (3), congrats, you have the logic of a Redditor!

User jazz_man posted that they “have the router’s setup page as a quick launch icon on my phone”—a statement accompanied by the image below. Further proof that nobody knows how memes work anymore. 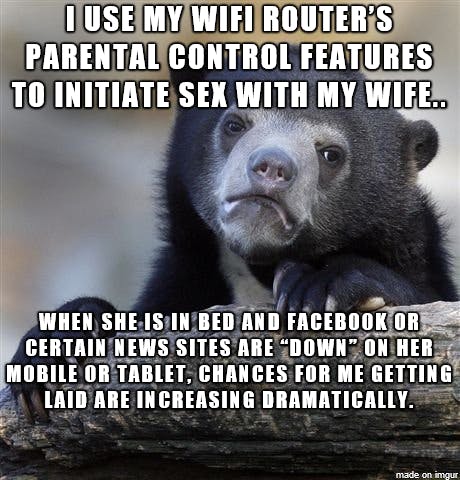 Plenty of Redditors chimed in with sympathy, advice, and similar stories of their wives wanting to do literally anything else besides have sex with them. (Including just using their mobile data to continue surfing the Web.)

And plenty of others were like, “Bro, you lead a sad existence in this indifferent universe.”

Marriage is hard, people’s libidos change over time, and keeping things fresh and interesting in the bedroom over the course of years is not something anyone understands innately.

Just kidding! Everyone else’s spouse wants to hit the bone zone constantly—sucks for you, jazz_man!