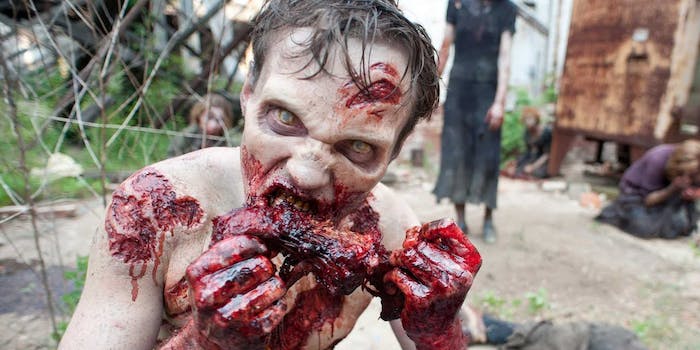 5 reasons ‘The Walking Dead’ is the biggest show on TV

Here’s how a depressing show about zombies became the TV show the Internet can’t get enough of.

Like the undead rising from the grave, a cultural phenomenon is slowly creeping toward us. This Sunday’s premiere of The Walking Dead delivered a mind-boggling 17.3 million viewers, even before factoring in DVR playback and encore viewings, two factors that boosted last season’s numbers to as high as 28 million per episode. For reference, AMC’s more overtly zeitgeist-defining show, the deafeningly acclaimed Breaking Bad, drew 10.3 million for its finale, the show’s most-watched episode. The Walking Dead’s numbers nearly double that.

This would be a surprise if the show’s Nielsen ratings weren’t so routinely earth-shattering, redefining everything we think we know about cable shows. The Walking Dead isn’t just the most-watched cable show in history (yes, even beating The Sopranos and Game of Thrones). AMC’s monster hit is the most-watched show in the key 18-49 demo, and you have to go as far back as American Idol’s 2007-2008 season to find another program that matches its success in that age bracket. That puts The Walking Dead on par with Friends and Desperate Housewives, two of the biggest successes of their decade.

In an era when pundits say no one watches television and viewers abandon their TV sets for Hulu and Netflix, audiences continue to turn out in droves for a bleak apocalyptic drama. Here’s why.

1) Zombies are so in right now.

It certainly feels as if zombies are having a moment in American popular culture. Despite widespread predictions of its demise, the Brad Pitt-starring World War Z raked in $540 million worldwide, ahead of the Star Trek sequel and Wolverine’s X-Men spinoff. Last year’s Warm Bodies additionally surprised by taking in $116 million at the global box office, topping even 2009’s Zombieland, the surprise hit starring Woody Harrelson and Jesse Eisenberg. According to the Wall Street Journal, a third of all zombie movies have been released in the past decade.

These box office figures match Google Trends that show a rise in apocalypse-related search terms within the past five years. Although “zombie” leads all other such keywords in frequency of searches, CNN reports that words and phrases like “end of the world” and “apocalypse” fare well, although “doomsday” has been slightly less sought-after. Zombies have become so popular, in fact, that when the CDC posted a blog on its website about how to prepare for a undead uprising, the viral traffic crashed its servers within two hours.

2) We’re living in a golden age of genre television.

In 2011, ThinkProgress’s Alyssa Rosenberg and io9’s Marc Bernardin wondered why there weren’t more unequivocally great genre shows on television, on the level of The Wire, The Shield, or Mad Men, shows Bernardin said “are killing it week-in, week-out.” Bernardin and Rosenberg cite Battlestar Galactica and Lost as examples of how good genre television can be, but the problem is that they had the discussion three years too early, before everything on TV became “dark” and “gritty.”

Although TV currently has few heirs to The Wire’s indisputable greatness, what genre TV lacks in history-making quality it makes up for in quantity, with a bunch of shows that are good or arguably great. In 2014, the genre TV landscape offers the much-lauded Game of Thrones, American Horror Story, The Americans, True Detective, Justified, Orphan Black, and Hannibal. This season has also brought the addition of acclaimed The Flash and Gotham, which join Arrow and Agents of S.H.I.E.L.D. in pushing the superhero genres on the small screen.

Bernardin argued that a major impediment to genre on television is that such shows are “thinky” (like Fringe) or “expensive” (like later seasons of Heroes), which may prove an unsustainable model for television. But the genre explosion has proven that all types of narratives can flourish on television, and the mega-success of the dense, challenging Game of Thrones proves that thinky and expensive can be very profitable. (And it’s still cheaper than Friends, which cost NBC $10 million per episode.)

But for the record, you don’t have to spend a fortune to bring genre programming to TV. After all, many TV critics argue that the relatively low-budget Breaking Bad was secretly the greatest Western on television.

3) It’s like nothing else on the air right now.

While broadcast networks are busy trying to clone one another into oblivion (see: NBC’s State of Affairs, which is Scandal with a white lady), Variety’s Andrew Wallenstein argued that The Walking Dead’s ornery distinctiveness sets it apart. “The… logline makes it seem like a slasher film,” Wallenstein wrote in February. “But that’s really more of a hook for what may have its share of fan-friendly action elements but is at its heart a multilayered, character-driven piece. Walking is actually a very thoughtful meditation on the difficulty of retaining one’s humanity amid dire circumstances. It plays more like a Holocaust drama than a horror pic.”

Although cable fare like Duck Dynasty or The Closer are more geared toward a broad audience, Wallenstein here suggests that its auteur aspects are what give it such mass appeal. “Most amazing of all was [The Walking Dead’s] audacious decision to bench the entire cast for two episodes to tell the story of the Governor—name another show that would dare do that,” Wallenstein said. “If anything, the sidelining was tacit acknowledgement that its lead actors aren’t exactly featured attractions on this series.”

True Detective offered a show equally as challenging to viewers with the promise of a multilayered, season-long story arc that rested heavily on philosophical and existential quandaries, but for all of its Lovecraftian leanings, its hook was fairly conventional. True Detective was about watching two marquee screen actors chew scenery in a prestige cable drama, whereas in the case of The Walking Dead, its generic trappings are the show’s entire appeal.

4) The show has a massive female audience.

This season has seen a huge shift toward rom-coms in primetime, with shows like Marry Me and A to Z making up for the dearth of romantic comedies at the multiplex. While studios try to figure out what women want by giving them small-screen versions of the same vehicles that sputtered out in Hollywood, The Walking Dead proved women love a good undead corpse. The show is the most-watched program among women, beating out even Shondaland’s much-discussed Scandal and Grey’s Anatomy. (Considering the show’s previous numbers, The Walking Dead will likely best breakout hit How to Get Away with Murder as well.)

Until recently giving its female fans the middle finger by dropping the ball on domestic violence, the NFL proved that women are a huge growth market for traditionally male-driven entertainments. However, you don’t have to pander with rhinestone jerseys and “fanicures” to get ladies to show up. As Jessica Valenti explained in a June piece for the Guardian, the appeal of The Walking Dead among women is that it treats its female characters like people, instead of rape victims in waiting.

Valenti compares The Walking Dead to Game of Thrones, a show that has been unapologetic in its brutal depiction of sexual violence against women. “A common defense of the incredible amount of sexual violence on Game of Thrones, especially the current season finishing Sunday, is that rape would simply be a part of the show’s world,” Valenti wrote. “In a post-apocalyptic setting like the one on The Walking Dead, surely rape would be a reality as well, but you don’t need to depict extreme sexual violence for millions of people on a television screen in order to maintain the authenticity of a compelling television series.”

That doesn’t mean that rape doesn’t exist in The Walking Dead’s universe, and those realities are hinted at in a way that acknowledges it as an issue without shoving misogyny in the viewer’s face. Valenti said, “For me, this makes all the difference.” It likely does for the other women watching, too.

5) Zombies can mean whatever you want them to.

Among the reasons for The Walking Dead’s success, one of the most cited is the ways in which the show (and the zombie genre at large) speaks to our cultural era, but no one can decide on exactly how that is. Depending on your perspective, it’s about the fear of widespread disease outbreak, World War II, consumerism, the anxieties of modern work culture, Communism, the slow degradation of the earth’s natural resources leading to total collapse, the rapture, or a metaphor for teen male sexuality. The message is in the eye of the beholder.

In a piece for the Huffington Post, Dennis Miller discussed the lasting popularity of zombies with Dr. John Ulrich, who looks at the long history of using zombies as a cultural Rorschach test. Since their first appearance in popular culture, with the 1932 play Zombie and the Bela Lugosi film White Zombie, the somnambulants of Haitian folklore spoke to our deepest anxieties about mortality, as we face up to the great societal evils that define our cultural era. (Vampires, which could stand for either the threat of female sexuality, Jews, or the black death, served the same purpose.)

“More than any other kind of monster, the zombie is a virtual blank slate, a screen upon which we can project a variety of meanings,” Ulrich told the Huffington Post. “At its most elemental level, of course, the zombie represents our fear of death… As an added bonus, zombies can be killed with impunity, without guilt or shame, since they are already dead. They lack consciousness and their condition is irreversible. This is the bedrock of their appeal.” For Ulrich, the power of the zombie is not in his gravesite rise but his fall. When we put down the zombie with a shotgun, we restore order from chaos, everything in its right place.

Five seasons into The Walking Dead, there doesn’t seem to be a light at the end of the tunnel for the show’s band of survivors. But as news reports about Ebola speak to our most ingrained fears that the end is near for us, too, we need them to beat the odds. If The Walking Dead can conquer the Internet, who’s to say the show can’t put down a little ol’ zombie apocalypse?