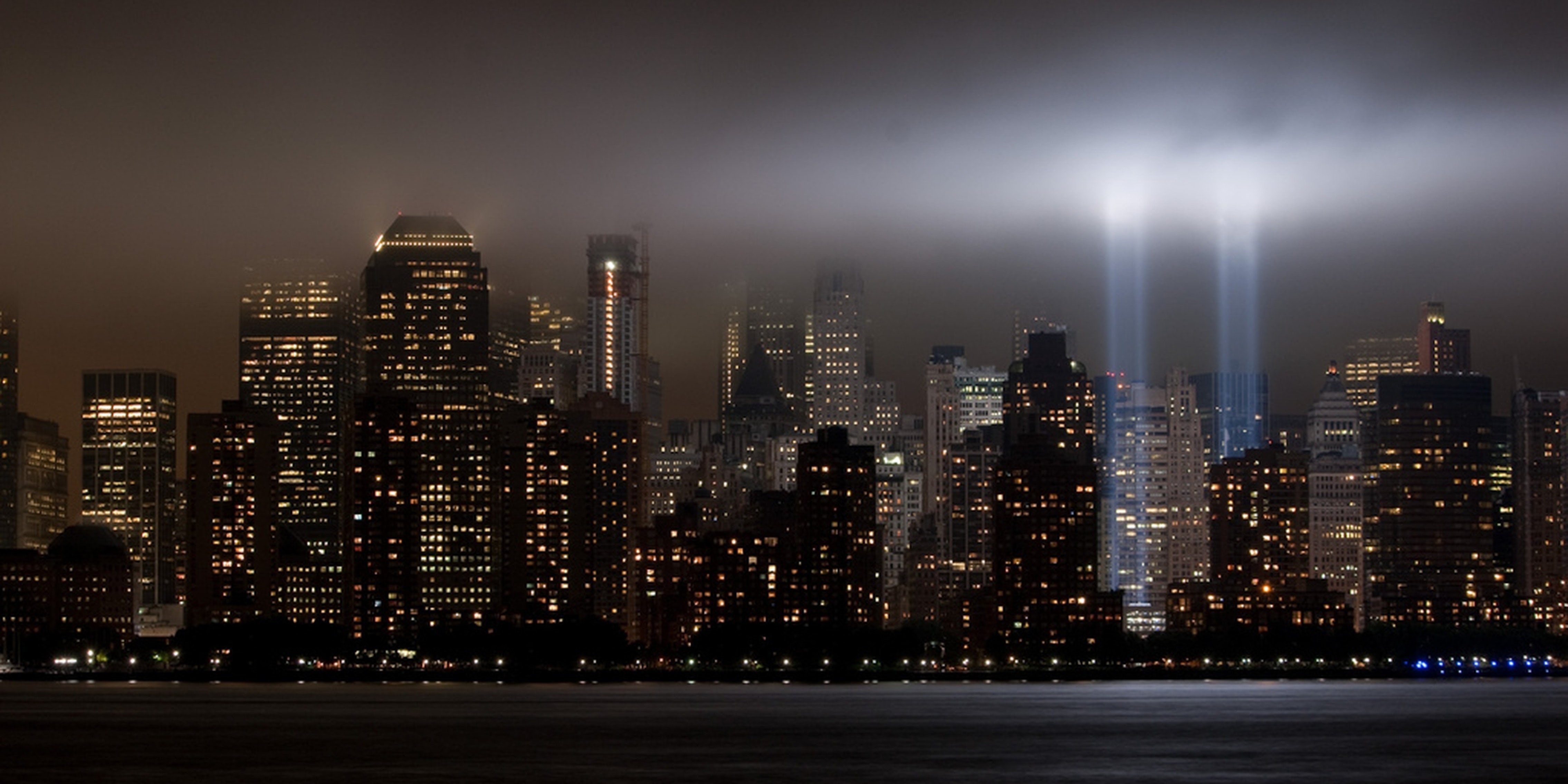 Welcome to the United States of Amnesia.

13 years ago I woke up in my bedroom in California to the sight of my father looming over me.

At the time, groggy with sleep after a late night out partying, I had trouble parsing the meaning of his words, and I straggled out the door into the living room to the sound of the radio blaring words that seemed meaningless to me, tumbling over each other in a confusion of sound. The announcers sounded edgy, frightened, as they repeated the same useless bits of information over and over again. I hauled out my laptop and we laboriously watched the same jittering streaming video over and over—Falling Man penetrated our cozy rural kitchen and created a sharp dividing line between then and now.

Nearly 3,000 people were killed on September 11, 2001, including the victims at the Twin Towers, the Pentagon, and Flight 93. It was a formative moment for the United States—and it’s one that in years since has launched multiple wars, scores of memorial sites and events, an entire surveillance and security culture, and a fundamental shift in the American consciousness. An attack on U.S. soil from nebulous actors was a sharp notice to the nation: We were no longer safe.

It was a moment that reshaped America, one that we promised ourselves would live forever in our consciousness. “America has stood down enemies before, and we will do so this time. None of us will ever forget this day. Yet, we go forward to defend freedom and all that is good and just in our world,” said President George Bush in a speech to the nation on the day of the attacks, setting the tone for a decade of American foreign policy.

In the years afterward, late August and early September were accompanied by an escalation of media coverage on September 11. Viewers and readers were reminded that the dread anniversary was approaching—as recently as last year, the first third of September was filled with September 11-related media coverage on the event itself, memorials, the construction of Freedom Tower, and related subjects. The September 11 coverage was so universal that it was almost overwhelming.

This year, it seems to be passing by the Internet without a trace; no ramp-up, no drumbeating reminders of the 21st century’s “day of infamy.” On Wednesday, CNN’s headlines focus on ISIS and Ray Rice. Fox News says President Obama is performing poorly in the polls and includes a story with “climate change” in scare quotes. Even The New York Times—the Grey Lady, paper of record, the publication at the heart of the city perhaps most affected by September 11—is silent on the subject, with coverage of campaign finance reform, Lena Dunham, and the impending Scottish independence vote.

Many, it appears, have entirely forgotten the significance of the calendar. September 11 is a Thursday, nothing more. “Remember to get your invoices in for Friday,” editors remind their writers. Get your work set up so you’ll have a chance of leaving the office early tomorrow. Some people have forgotten entirely; this is just another September Thursday. Yesterday was Wednesday, and tomorrow will be Friday. Days march on.

At what point do dates lose significance? Are we truly in a “United States of Amnesia,” as posited in the 2013 film of the same name? Gore Vidal, the subject of the film, certainly thought so, but the truth of the matter may be more complicated. The United States may be less a nation of forgotten lessons, and more a nation of remembered ideas. What’s more important: The date, or the remembrance of the event?

My paternal grandfather started his lifelong career of government service in the Navy, and the defining moment of his life was 7 December, 1941—a date that may not mean anything to many modern readers, except for history buffs. It was the moment when the United States was dragged kicking and screaming into the Second World War by the Japanese bombing attack on Pearl Harbor, one that killed 2,403 sailors.

A historic policy of isolationism and American Exceptionalism simply didn’t work in the modern world, as the U.S. learned after Pearl Harbor and then again in 2011, 70 years later. While conservative opinion editors claimed that America had forgotten Pearl Harbor in the wake of September 11, it’s more likely that it had been folded into history, part of a collective past rather than a singular incident.

70 years is a long time. At some point in the intervening decades, Pearl Harbor had to go from a national day of somber collective memory, to a date of historical importance, to just another December day. The same thing happened with Veterans Day, which used to mark Armistice Day, the end of the First World War—those red poppies you buy in November are a remembrance of the blood-soaked fields of Flanders and the men who died there. It’s unclear how long this process of slow forgetting took, but today, we can chart the same sequence of events for September 11, and it would appear that the Internet has speeded the inevitable.

The Internet has made the world a much smaller place. The coverage on the front pages of numerous U.S. news outlets on Wednesday wasn’t trivial; it wasn’t making light of September 11 or dodging a critical historic day. There’s much more news today for Americans than there was in 1941, or even in 2001; and inevitably, we must make room for new events, lest we find ourself trapped forever in the past—who commemorates 14 October as an ignominious day, now that 1066 has passed into a different millenium?

The ISIS crisis (born in part because of how the U.S. responded to the terrorist attacks of 2001) is a critical piece of news. What’s happening in Gaza is something people should be paying attention. The ongoing Ebola outbreak needs coverage.

There’s so much news that it can almost seem overwhelming to follow news and information. Americans are nearing a saturation point, and the Internet increases the rate at which we whip through events and are forced to either synthesize them or die. Do we remember the exact date the ebola outbreak started? Can we recall the names of all the eyewitnesses to date in the Michael Brown case? Can we easily name every single major N.F.L. domestic violence scandal? Are we aware of all of these events as social and cultural issues? Yes.

It’s becoming nearly impossible for a single event to entirely eat the media. Apple almost accomplished it on Tuesday, but even Apple couldn’t dominate the news, and it lost its foothold quickly. By Wednesday, they were sharing newsprint with scores of other stories of varying degrees of importance. This a natural evolution of the Internet, which forces an endless parade of new topics before the public eye—arguably a good thing, when so many topics need attention.

The biggest September 11-related story in 2014 probably had to do not with commemorations of the event but with the incredibly tacky monstrosity of a gift shop established at the September 11 memorial site. It went viral because it had all the elements of a great Internet story: Tragedy, a ridiculous element, a note of the macabre, and an easily listicled component. You wouldn’t believe what the 9/11 gift shop is selling. The top nine most tacky items in the Twin Towers gift shop.

Deep underneath that same site lie the remains of unidentified individuals—every scrap of human remains that could be collected at the site, but couldn’t be linked to one of the deceased. That this vast vault of horror and memory lies not that far from a gift shop filled with commemorative keychains and tacky mugs is perhaps indicative of the true spirit of America, and it made for a compelling news story.

September 11, as an event, though, is no longer a story. There is nothing specific to pin to the event, except for a handful of remembrances and, perhaps, a warning about an increased terrorist threat level. September 11 as an idea, however, is still alive and well within the American consciousness. The Internet may not have remembered the date, but it does remember the concept.

The Internet remembers the Second World War, although some might have trouble with key dates and the specifics involved; but the important takeaways are still there. Likewise, for America, the Revolutionary War, another key moment in U.S. history. Does it matter that the Declaration of Independence was actually approved on July 2nd, not the 4th? Not really—sorry, cringing historians—what matters on a national level is that it was signed in the first place.

Photo via idovermani/Flickr (CC BY 2.0)