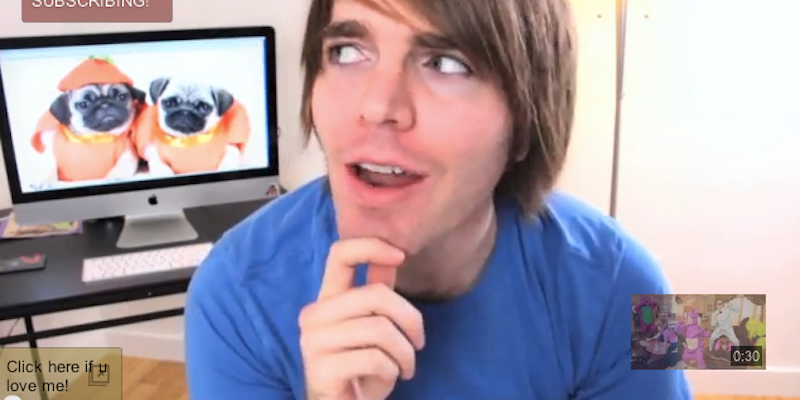 Why no one wants to pay for YouTube channels

Here's why the idea of YouTube pay channels totally misses the mark, according to industry writer and filmmaker Jason Schmid.

Unless you’ve been living with that Russian family cut off from human contact since before World War II, you may have noticed that pretty much every video worth a watch on YouTube has an ad in front of it. This, of course, is not an accident. This is a carefully built and highly profitable scheme created by the good people of Google, and one that’s been netting top YouTubers annual salaries of well over a hundred grand per year.

That’s right, that dopey guy with the Justin Beiber haircut is making around four hundred thousand a year for essentially talking into his webcam about nothing. Do yourself a favor and try not to think about what kind of money the Annoying Orange is pulling in—it’s hard enough getting to work on a Monday as it is, and knowing that the world’s most abrasive citrus is pulling in more than you are isn’t going to help.

The latest twist from the brain trust at YouTube, the idea of the paid channel, has taken a page from the book of, If it Ain’t Broke, Let’s Try to Break it. When Ad Age broke the story, a collective “WTF?” rang out across cyberspace. 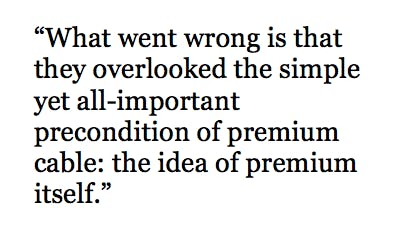 Remember TV? You know, it’s that thing you watched The Sopranos and Homeland on. And Game of Thrones and Dexter and Girls and Boardwalk Empire… see the pattern here? Well, the gang at YouTube saw the pattern too.

They saw premium cable charging a hefty monthly fee, and they thought about all those millions upon millions of views their popular channels get, and it was only natural to do the math.  Apparently a few billion views at a few dollars a piece is just too much money to pass up. I’m sure they then all did a good round of back patting and buying each other overpriced cocktails at whatever painfully trendy mixology speakeasy bar the YouTube guys go to after work. After all, what could possibly go wrong?

What went wrong is that they overlooked the simple yet all-important precondition of premium cable: the idea of premium itself. The idea that this stuff really is the best of the best, and it’s worth paying extra for.  To put it bluntly, when things you want to watch are awesome (like The Sopranos), when they are so good you’d swear it was a major studio film, when the content is of such exceptionally superior quality that it’s worthy of the word premium—then, and only then, will the audience be happy to pay for it. And premium, on YouTube? So far, it ain’t. To be fair, some of the better content from Machinema and Full Screen is beginning to resemble network television, but let’s all keep in mind the important fact that network tv is free.

The word is that YouTube partner companies Maker Studios, Machinima, and Fullscreen, who control well over 10,000 YouTube channels between them, will be the first to take the plunge into pay subscription channels. Sure, these young companies have a huge number of channels, and tons upon mind-numbing tons of view counts, but the disconnect between what they offer on YouTube and what premium cable (or, for that matter, Netflix or Hulu Plus) offer  is trying to find similarities between The Hubble Telescope to Kim Kardashian—only the Hubble telescope is undeniably amazing and has contributed immeasurably to the furtherment of science and the whole of mankind, while Kim Kardashian is just stupid.

The idea of premium is the lynchpin around which this entire pay-to-watch endeavor lives or dies. Game of Thrones is a multi-million dollar extravaganza—per episode. Whether or not Lord of the Rings-ish people behaving like sex-obsessed fourteen year olds is your thing, the production value is as undeniable as the gratuitous girl-on-girl action.

Now don’t get me wrong—I love YouTube. YouTube is the answer to years of restless insomnia for me, and I can still kill as much time as there is bandwidth to be had, watching Russian car wrecks and GoPro cameras mounted to pretty much anything. But while these cultural gems are amusing, the words production value don’t easily come to mind. Nor engrossing epic. The same can easily be said about virtually all of the products on offer from these YouTube Channel providers. Are they funny? Sure. Entertaining? Sometimes. Emmy award-winning premium programming? Not so much.

Outside of the music video channels some of these guys provide (which, to be fair, do have some big name talent attached), are we likely to get the same high caliber content we as consumers have come to expect from the glossy media outlets that charge us a monthly fee?

You all know the answer to that already.

YouTube has also failed here to recognize their audience. An older YouTube consumer is someone who grew up on Napster. For a younger one, who probably started stealing music after Napster shut down in 2001, the idea of paying for online content is just an absurd story old people like to scare them with. Not to mention the fact that they are just that, after all: kids. Are parents really going to give kids another $4.50 per month in their allowance so they can watch awkward guys do bad green screen parody songs? For money?

YouTube is poised on an enormously powerful precipice. Does it have the power to kill television? Most likely, yes. But what they seem to have forgotten is that in this country at least, television has a long history of being pretty close to free. We tolerated the ads in return for the half hour comedies, the cop shows, the endless hours of housewives of wherever. That was the deal and it largely still is. It’s part of the very soul of television. 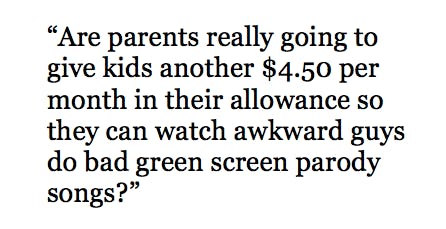 YouTube seems embarrassingly tone deaf to these unwritten norms we have held with our entertainment providers in the past. Which are basically: If you make really cool TV shows that pretty much look like movies, we’ll pay a decent amount for that—but it’s gotta be really really good. And sure, if you can supply me with hundreds of A-list movies and network TV shows on demand and commercial free, I’m willing to throw you a few dollars per month.

But if all you make are three minute videos and you use crappy looking green screen effects as your sole “production value,” don’t expect me to pay a monthly fee. It just won’t happen. Especially considering that the other guys with the hundreds of movies and TV shows just got David Fincher to produce a big fat thirteen part series which I can watch for about the same price per month as you’re offering for your line up of low-fi web shows.

For three minute web videos, you’ve already reached my limit. My limit is the five seconds of a commercial before I hit the “Skip Ad” button.

So be mindful as you enter the pimply faced years of your adolescence, young YouTube Networks. Remember, the fact is, any video on YouTube can be ripped, downloaded, and re-uploaded to a subscription-free channel faster than you can say “Hey, whatever happened to SOPA?”