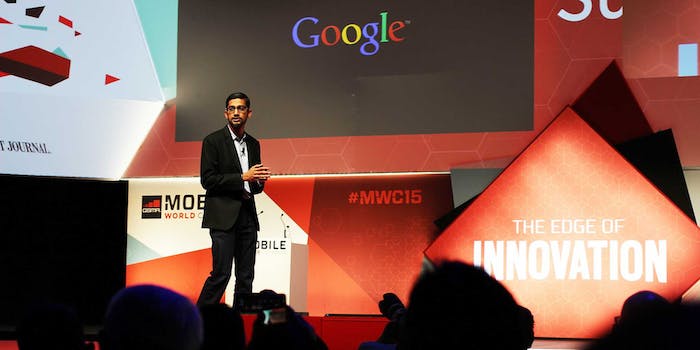 Google's appointment of Sundar Pichai is a big step forward for diversity in Silicon Valley.

When Google CEO and co-founder Larry Page blogged about the creation of Alphabet, he had another exciting announcement. Former Chrome and Android chief product manager Sundar Pichai is slated to become Google’s new CEO.

@tim_cook thanks Tim, appreciate it!

This is exciting to me on two levels: First, despite employing many Asians and Asian Americans in lower-level positions, Silicon Valley companies struggle to appoint them to leadership roles. Pichai becoming Google’s New CEO matters because his appointment is a major step forward for the Asian American community.

But second, and much more personally, my parents and I are also immigrants from India, and I was raised in Silicon Valley as the daughter of a software engineer. To see someone like Pichai heading one of the Valley’s biggest tech companies is something I thought would not happen for years.

But simultaneously, Indians and Indian Americans have been making their mark in Silicon Valley. According to 2014 research from Professor Vivek Wadhwa, approximately 15 percent of Silicon Valley start-ups are founded by Indians. And Pichai isn’t the only Indian CEO of a major tech company: Satya Nadella was named the CEO of Microsoft last year, and Shantanu Narayen has been the CEO of Adobe Systems since 2007.

Despite employing many Asians and Asian Americans in lower-level positions, Silicon Valley companies struggle to appoint them to leadership roles.

So then why is Pichai’s appointment so important? To understand this, it’s necessary to understand exactly how poorly Asians and Asian Americans are represented on the executive levels of tech companies. Earlier this year, start-up founder Karun Chaudry, a Stanford graduate who is still on an H-1B visa, told NPR it’s difficult for Asians to move up through companies if there aren’t already Asian figures in company leadership who can serve as role models. This is especially true for Asian American women, over whom white men have a 260 percent advantage when it comes to being promoted to executive positions.

But Chaudry also said that Nadella’s appointment as CEO of Microsoft was a cause for hope: “I think with Satya Nadella becoming the CEO of Microsoft and immigrant companies becoming super successful, I think that balance will change. But it will not happen overnight.”

This message, of course, does not apply just to Asians but also to other people of color who are heavily marginalized by the tech industry. However, there’s another perspective here—one that I didn’t consider until I got on the phone with my dad. I wanted to know what he thought about Pichai’s appointment, because he’s also an Indian immigrant who’s been working as an engineer for a major Silicon Valley company for a long time.

We took a moment to laud Pichai for such an incredible achievement; his story was a familiar one. Born in Chennai, India and raised in a small, two-bedroom apartment—without a car and, for some time, a telephone—Pichai studied engineering at IIT Kharagpur before getting a scholarship to Stanford and working in Silicon Valley.

It’s difficult for Asians to move up through companies if there aren’t already Asian figures in company leadership who can serve as role models.

But my dad also perceives news like this differently than I do. I am constantly fighting for increased representation of South Asians in the public sphere, and I, therefore, get really excited when things like this happen.

My dad is excited about it, too, to a certain extent, but for him, the merits of a potential executive far outweigh personal background—and part of that comes from a greater interest in engineering than a business or managerial role. But he also focuses more on what individuals have accomplished and what they’re capable of, and I don’t want to write over his voice—as someone who actually works in the region—by yelling about microaggressions and structural racism when I’ve never worked at a tech company myself.

That’s not to say that these things don’t exist in Silicon Valley, because they certainly do. Everyone from small Indian newspapers to Indian Prime Minister Narendra Modi is celebrating Pichai’s appointment, because it shows that Indian immigrants can succeed, and it wouldn’t require such momentous celebration if it wasn’t such a rarity in comparison to the appointment of white male CEOs.

The conclusion at which I’ve arrived is this: I am entitled to celebrate Pichai’s appointment, just as many other South Asian folks are doing. But I can simultaneously understand and respect the point-of-view of people like my dad, whose hard work got me into this country in the first place and gave me the ability to write about things like this. Maybe he doesn’t feel the burden of racism in his employment; he is not saying that it doesn’t exist—or that others don’t experience it—but his lived experience is something I cannot and will not try to take away from him.

Silicon Valley still has a long way to go when it comes to diversity and inclusion. It needs to employ more women and people of color, and it needs to make a concerted effort to give them the resources they need to take on leadership roles within their companies. Pichai’s appointment, like Nadella’s, is a significant one, and it certainly is a step forward, but the fight for greater representation within the tech industry doesn’t end here.