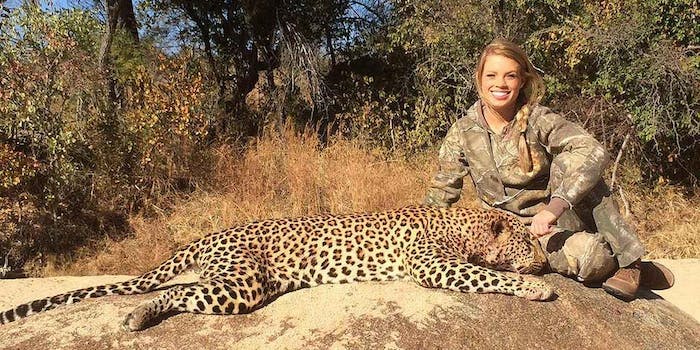 Why does the Internet want the ‘Texas Cheerleader Hunter’ dead?

On the Internet, women are the most dangerous game.

Kendall Jones, the 19-year-old Texas cheerleader who’s been proudly hunting animals for sport since childhood, has made a lot of people understandably angry, after posting photos to her Instagram account of herself posed with dead lions and leopards. What’s less understandable, though, is why Jones seems to be unique among trophy hunters in garnering this much hate and attention. Observing all of these responses that have been pouring in over the past few weeks, pro golfer John Peterson tweeted, “I support Kendall Jones. If it was a 60-year-old overweight dude posing with his African kills, no one would talk.” While Peterson doesn’t sound like he has a problem with hunting (indeed, his Twitter bio says, “If I could get paid to hunt, id be doin that”), he correctly notes that men who hunt don’t seem to garner such a reaction.

In fact, a Virginia Democrat—not on the ballot but seeking Eric Cantor’s House seat—named Mike Dickinson even publicly offered $100,000 to any “ex-boyfriends” who could provide naked photos or “sex stories” about Jones. (There, I hope, go his electoral dreams.)

First of all, using misogyny—or whatever noxious mixture of elements causes our cultural panic about women, sex, and nude photos—to abuse someone who’s done something wrong is not any sort of justice I believe in. Second, I’ve never heard of anyone bribing people for nude photos of a man, at least not as some sort of convoluted punishment. That threat is used against women and those perceived as women exclusively.

At the same time as the Democrat’s nudie pic requests went viral, a Facebook page popped up calling for Kendall Jones’ death.

However, I don’t want to say that the Internet hates Kendall Jones just because she’s a woman. To say that would be to conveniently ignore the cruel things that she does in order to make a point about sexism.

A more accurate way to interpret this might be that the Internet hates Kendall Jones because she’s done cruel things, but the only reason everyone even took notice of those cruel things is because Kendall Jones does not look or sound like the type of person we expect to hunt animals for sport.

Normally, the idea of trophy hunting isn’t one that most people, even those who generally care about animals, have much of an emotional reaction to. Some find it acceptable or even laudable; others mildly disapprove—but not enough to have strong feelings about the issue. It wouldn’t surprise me if seeing someone unexpected participating proudly in trophy hunting triggers a negative reaction that people then attribute to the person’s actions rather than their identity.

After all, it takes a lot of self-awareness to notice and think, “Huh, I seem to be having a very strong reaction of anger and disgust when I see a young attractive woman posing with animals she killed, but not when an older man does the same thing.” Most people will instead think, “Wow, I’m very angry about this. It’s disgusting to kill animals for fun like that.”

Most people who experience such a reaction would simply assume that it’s being caused by the most obvious thing: the pointlessly killed animals. They forget all the times they encountered the idea of men hunting animals for sport—because those encounters didn’t register on such a high emotional level.

Such misattributions of arousal, as they’re known in research papers, are common in human psychology. There’s a well-known study in which men had to cross either a terrifying suspension bridge or a much more secure one, and an attractive woman was hired by the researchers to stand in the middle of the bridge and ask the men to take a survey. Afterwards, she offered them her phone number in case they wanted to discuss the study further. The men who crossed the scary bridge were four times more likely to call the woman. The researchers theorized that this is because the men who crossed the scary bridge experienced higher levels of physiological arousal—faster heart rate, faster breathing—and attributed that to sexual attraction to the woman on the bridge.

In another study, people were injected with adrenaline, which stimulates physiological arousal. Some were told what the injection was an informed of its effects on the body; others were told that it was simply part of a procedure to test eyesight. They were then exposed to either an angry or a happy confederate (a person paid by researchers to serve as an actor in a study, like the woman in the previous example). Then, they were asked about their emotional state.

The participants who did not know they were receiving adrenaline were much more likely than the ones who were informed to express the same emotion that the confederate they’d interacted with had expressed. According to the researchers, these people attributed their heightened levels of arousal to either happiness or anger, believing that they were influenced by the person they interacted with.

There are a lot of studies like these, and a lot of evidence that people aren’t always very good at understanding where their emotions come from. And the key finding is that, when misattributing arousal, people tend to earnestly believe that they’re accurately explaining why they’re angry or happy or sexually interested. They’re not lying.

It would be fascinating to do a study like this about women who violate gender norms while doing something many people believe is ethically wrong. Until I see that research, this is just a theory informed by a bit of evidence. Maybe it can help explain why reactions to women like Kendall Jones are so vitriolic, and also so righteous.

I don’t think that people who hate Jones but not other (male) trophy hunters are hypocrites, necessarily. I just think they haven’t really asked themselves where their emotions and opinions come from. If Jones makes you angry, remember that feeling next time you see an old white dude posing proudly with a dead animal and see if the feeling comes back. If it doesn’t, you were probably angry about who she is, not what she does.