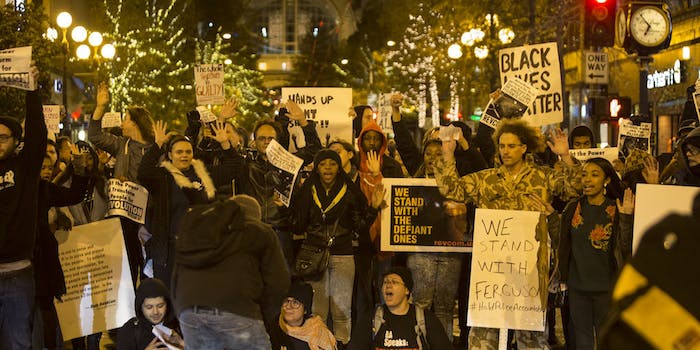 As Martin Luther King once said: Injustice anywhere is a threat to justice everywhere.

In the wake of last week’s Ferguson decision, in which a grand jury decided not to indict Darren Wilson in the killing of Michael Brown, protests from all across the country erupted to show support for the Brown family and condemn police violence. National civil rights groups and black organizations from the Coalition for Humane Immigrant Rights of Los Angeles to Yale’s Black Law Association have spoken out against the jury’s verdict, and an historic joint letter from black church groups compared Ferguson to the “long and bloody trail of lynchings, deaths, and killings of African American youth…throughout our nation,” including Emmett Till and Trayvon Martin.

National LGBT groups have likewise criticized the Ferguson decision, coming together for a joint statement spearheaded by the Human Rights Campaign. “When communities experience fear, harassment and brutality simply because of who they are or how they look, we are failing as a nation,” the open letter read. “In light of the recent events in Missouri, it is clearer than ever that there is something profoundly wrong in our country.” The statement was also backed by the National Gay and Lesbian Task Force, PFLAG, the Center for Black Equity, National Black Justice Coalition, National Queer Asian Pacific Islander Alliance, the AFL-CIO’s Pride at Work, and the ACLU.

The move may be surprising for some, but in a statement to MSNBC, HRC spokesman Adam Talbot argued that racism, police violence, and justice are key issues for the LGBT community. “It’s an issue that encompasses all communities that have experienced injustice,” Talbot said. “We can’t be silent because LGBT people come from all races and backgrounds.” Ferguson is an important moment for LGBT-identified people not just to act in solidarity but also to recognize the Michael Browns that exist in our own community. For many queer people, especially queer people of color, the question of #IfTheyGunnedMeDown isn’t a hypothetical. It’s a reality.

It’s fitting that the Ferguson grand jury decision came through almost 36 years to the day after the death of Harvey Milk. On November 27, 1968, San Francisco city supervisor Dan White assassinated Milk, the first openly LGBT person elected to public office in the U.S. White gunned Milk down with a police-issued revolver—shooting him five times, twice at close range. Milk was just 48 years old. Some, like SF Weekly’s John Geluardi, have suggested Dan White’s motives were “more about betrayal than homophobia,” but a court decided it didn’t matter either way—ruling that White was under the influence of junk food, and thus, his crimes merited a lesser charge. The aptly named “Twinkie Defense” landed White a sentence for voluntary manslaughter. White would serve just five years in prison for murder.

The resulting protests profoundly echo last week’s outrage after the Ferguson verdict went public. “Thousands marched from City Hall, clashing with the cops in hand-to-hand combat, smashing the windows and doors of the building and setting fire to a dozen police cars,” wrote gay rights activist Sean Strub in his account of what were later known as the “White Night Riots.” According to Strub, that anger emboldened the city’s LGBT population and their allies. “Harvey Milk’s people do not have anything to apologize for,” said Milk’s successor on the Board of Supervisors, Harry Britt, in a now-famous statement. “Now society is going to have to deal with us not as nice little fairies who have hairdressing salons, but as people capable of violence. We’re not going to put up with Dan Whites anymore.”

Like Stonewall, Harvey Milk’s assassination and the resulting legal injustice was a galvanizing moment for the LGBT movement in the ‘60s, just as Matthew Shepard’s death was in 1998. Aaron McKinney and Russell Henderson were convicted of murder in Shepard’s killing, after beating him, torturing him, and leaving his bloodied body for dead. The same year, James Byrd was murdered by a group of white supremacists in Jasper, Texas. The three men attached his unconscious body to the back of a pickup truck, where he was dragged for three miles; Byrd managed to stay alive until he was severed by a culvert, his corpse disposed of in front of a cemetery. In a 2011 interview, Lawrence Brewer, one of the men responsible said, “I’d do it all over again.”

A decade later, Byrd and Shepard would find greater justice in the 2009 passage of hate crime laws enacted in their name, which offer protections on the basis of sexual orientation, gender identity, or race. However, even the law has its limitations, especially when prosecuting bigotry in its ranks. Before Ferguson made police abuses national headlines, the Advocate, the nation’s leading LGBT magazine, reported that Louisiana Sheriff Sid J. Gautreaux had been targeting the area’s local gay population in a sex sting operation; a dozen men were arrested for violating the state’s illegal sodomy ban since 2011. In 2003, Lawrence v. Texas legalized relations between same-sex partners, but Louisiana is one of 13 states where sodomy laws remain on the books, despite being unconstitutional and a violation of civil rights.

Louisiana’s Advocate newspaper (which coincidentally shares a name with the aforementioned magazine) interviewed Casey Rayborn Hicks, a spokeswoman from the East Baton Rouge Sheriff’s office. “This is a law that is currently on the Louisiana books, and the sheriff is charged with enforcing the laws passed by our Louisiana Legislature,” Hicks told the Advocate. “Whether the law is valid is something for the courts to determine, but the sheriff will enforce the laws that are enacted.” Such doublespeak should sound familiar to residents of Michigan and California, where local authorities have engaged in similar practices. According to Equality Michigan, men in Kent County were picked up under a local “soliciting and accosting statute,” with many arrests initiated through police officer entrapment. In other cases, men were handcuffed for as little as holding hands.

In addition its lack of protections police harassment, hate crime legislation also fails to address the intersectionality between categories of race, gender orientation, and sexual identity; this is of particular concern to transgender women of color, who are at a higher risk for hate crimes than other segments of the LGBT community. BuzzFeed’s Dominic Holden recently reported on an epidemic of violence against trans women in Ohio, where four women have been murdered over the past 20 months. In Cleveland, Brittany Sturgis and Betty Skinner died on consecutive days. Sturgis was found in her car after being shot in the head, and Skinner, a disabled nursing home resident, experienced a number of head injuries before dying in her bed.

The LGBT community is still waiting to have its Trayvon Martin or Michael Brown moment, an incident that forces us to face up to the particular struggles faced by LGBT people of color on a daily basis. According to 2012 statistics from UCLA’s Williams Institute, 40 percent of homeless youth identify as LGBT, despite the fact that queer people only make up around 5 percent of the overall population, depending on estimates. Many of these young people will look like Martin and Brown, similarly targeted for police harassment.

In an essay for the Huffington Post, biracial writer Zach Stafford discusses his own feelings of visibility, both from police and from the general public, experiences that are a daily reality for queer homeless youth. “I have been in the ‘wrong’ place and policed by folks who live in that place far too many times just for looking ‘suspicious’ (translation: not white, not heterosexual, or not what is thought to be an upstanding member of that place),” Stafford writes. “Trayvon was a boy who was only 17 and black, and due to his blackness and a suspicious bag of Skittles and tea, he was killed for being in a place to which folks in that place believed he should be denied access. … If you were to talk to the thousands of homeless gay youth in America on any day, you would hear innumerable stories of being in situations like this and having to negotiate their own ways to safety for looking ‘suspicious’ because of their homelessness.”

If the LGBT community is waiting for its own Ferguson, Stafford further points out that now is a good opportunity to wake up. In Kansas City, Mo., a man recently gunned down Dionte Greene during a sexual encounter that went awry, after Greene met up with him “on the down-low.” The two had been corresponding for some time, but upon approaching Greene, the man shot him in the face. While an arrest has yet to be made, Stafford reports in the Guardian that the city is unlikely to prosecute the murder as a hate crime. Rebecca Caster, the city’s recently appointed LGBT liaison told Stafford, “If someone is actually engaged in ‘the act,’ then these are not hate crimes.”

For Stafford, the unfortunate lesson in Dionte Greene’s story is that “black gay men can do everything right—and still end up dead for being gay and black anyway,” but the question should also be how we, as a community, do right by Dionte Greene. In the Ferguson discussion, one area that has largely been overlooked is what the reality is like for the city’s LGBT population of color. What is it like to be black and gay in Ferguson—or even Florida, where being gay is just another reason to look “suspicious” to a local neighborhood watch volunteer? In court transcripts, Darren Wilson described Michael Brown as a “demon,” akin to an animal. He sounds a lot like a Westboro Baptist Church protester.