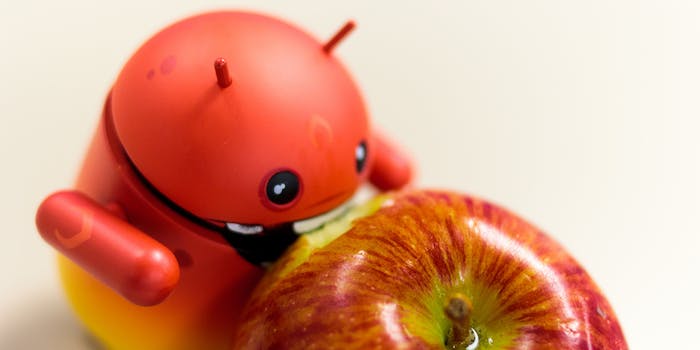 Android might not get the same love Apple does, but it could be the future of tech.

If you’ve talked to me in the past few months, you’ll have heard me explain that I think Android is the dominant platform of the next decade. There are two main reasons.

Android is gobbling market share at an unprecedented rate. Now, this doesn’t make it a one-horse race. This market share is coming at the expense of feature phones, Symbian, and Blackberry — it doesn’t appear to be taking much from iOS. Nor will we necessarily end up with a mirror of the PC/Mac split: the total addressable market for handsets is far larger than that for computers. So far, the market appears easily big enough for two major players.

However, the growth patterns of Android are what give it such power. Android utterly dominates in emerging markets. I’m no analyst or global market specialist, but it’s clear that major tech companies recognize this, and many have launched low-end Android clients to address these markets. While developing nations are nearing smartphone saturation, there’s enormous growth potential in the rest of the world. The curve will continue, and it’s likely that Android will reach a larger proportion of humanity than any comparable technology, if it hasn’t already.

And that’s just the smartphones. As the cost of processors and networks falls, a slew of tiny, cheap, connected devices will emerge from the R&D labs into the shops. If you like, call it the Internet of Things — I prefer “cooperating devices.”

These tiny, cheap, connected devices are going to need an operating system. Preferably one that’s free (monetarily free, at least), reliable, well-maintained, and has good interoperability.

It won’t be iOS, since Apple appears to have no interest in licensing it to third-party hardware. Instead, I expect they’ll launch an Apple-only ecosystem of cooperating devices. (I could argue they’re already part-way there.) Since they own the full stack, they’d be among the first to offer excellent IoT-like experiences, demonstrate value to consumers, and hence generate a mainstream market. They’d need a ton of cash to do this — fortunately, they have it.

I also don’t think it’ll be another OS. The others (Windows, Windows Phone, Firefox OS, Linux, etc.) lag far behind or have retrograde trajectories. That may change, but since global reach is slow, I’d have thought it’ll be several years before we see another major OS player.

I also don’t think it’s the web browser. In theory, the browser meets the criteria — cheap, ubiquitous, interoperable — and the web community would love it to win. But, bluntly, it is losing in terms of capabilities, performance, and user experience, where native apps are far ahead. Browsers are improving, and at last catching up in terms of hardware access, but if the browser is to become the One True Platform it will need to overcome significant systemic deficiencies. A browser permanently playing catch-up will always be an additional, potentially redundant, layer in the technology stack. If a single OS ends up running >90 percent of the world’s connected devices, why bother writing software for the browser?

Android is the dominant platform of the next decade. Why aren’t designers paying it more attention? (via @asymco) pic.twitter.com/ExSCCB19T6

Anyway, I wrote this tweet and received a ton of responses. I’m not going to embed them or name names .  I respect a lot of the people who chipped in, and I’m going to be pretty ruthless in my dismissal of their arguments.

The replies fell into two broad categories, of which I’ll give both charitable and uncharitable interpretations.

These arguments were familiar: fragmentation’s a hassle, the landscape is too fluid, Android lacks a design aesthetic, the Android UX is poor. I think unfamiliarity with Android played a small part in these responses. Kitkat is light years ahead of the Gingerbread era, and if you haven’t tried Android recently it’s definitely worth another look. I don’t quite agree with Stammy’s claim that Android is better, but it’s certainly much improved.

Fragmentation is of course the bête noire of Android design, and is certainly a challenge for designers and engineers alike. But the word itself reflects a subtle framing issue. It’s not hard to think of positive synonyms: fragmentation as choice; fragmentation as diversity.

As web designers have learned over the last few years, device diversity is natural, welcome, and manageable. Many responsive web design techniques  (e.g. fluid layout, breakpoints, resolution independence)  are essential principles of Android design. In fact, they’re handled in a more technically profound way on Android than the web.

Android design is indeed more difficult than iOS design in that it offers fewer constraints. But any skilled designer can handle that with a bit of effort. My uncharitable interpretation for this class of responses is simple laziness, and if Android forces designers to drop a pixel-perfect mentality and adopt approaches that suit a diverse world, then that’s no bad thing.

The other replies were mostly variations on the theme that Android users don’t pay for apps, they don’t have data plans, you can’t monetise them easily, and designers are all iPhone users and don’t really understand Android users.

This class of replies troubles me more than the first.

Economically, it seems shortsighted at best. Revenue models for digital products are fluid, and it can’t be good business sense to just write off a majority userbase. Appropriate methods are out there: the 450m monthly users of WhatsApp (the majority of whom use Android) are certainly willing to pay for something that adds real value to their lives.

It’s also important to remember that we aren’t designing products just for today. A sound product strategy will also be looking to address the market that exists in the coming years. Even in emerging markets, the data plans are coming, and the revenue won’t be far behind.

Socially, excluding Android users seems almost prejudicial. Unlike Android is difficult, this isn’t about about mere convenience; it’s a value judgment on who is worth designing for. Put uncharitably, the root issue is “Android users are poor”.

I do hope, given tech’s rhetoric about changing the world and disrupting outdated hierarchies, that we don’t really think only those with revenue potential are worth our attention. A designer has a duty to be empathetic; to understand and embrace people not like him/herself. A group owning different devices to the design elite is not a valid reason to neglect their needs.

I recognise that I have a fairly rare stance, given the ideology that surrounds platform issues: I don’t care which platform “wins.” I’m a very happy user of iOS, Android, and the web. I expect this post will upset a few people who believe their approach is best, but my only criterion of successful technology is that it enriches the lives of the world. Right now, Android looks to me like the best vehicle for doing that at the largest scale, and I think designers are mistaken if they disregard its potential.

This article was originally featured on Medium and republished with permission. Cennydd Bowles is a Design Lead at Twitter, the author of Undercover User Experience Design and a columnist for A List Apart.