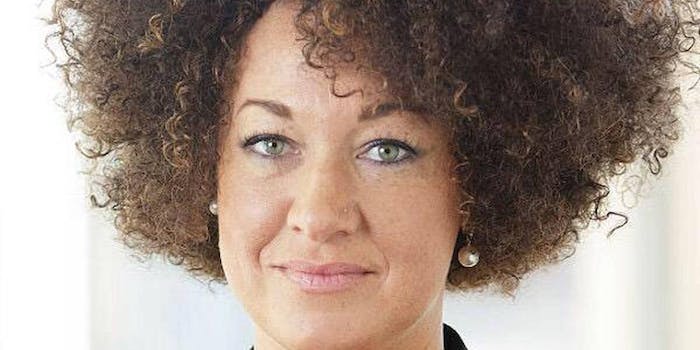 Why are we so obsessed with Rachel Dolezal?

Dolezal's case is an embodiment of racial panic in a changing America.

Are you obsessed with Rachel Dolezal? If you have a Wi-Fi connection, of course you are. The former Spokane, Washington, NAACP leader broke the Internet last week following allegations that she lied about her racial identity—and resigned from her position on Monday due to the widespread backlash. Although she was born to Caucasian parents, Dolezal darkened her skin and her hair to fit the physical appearance of a black woman.

In a Today show interview with Matt Lauer, Dolezal explained that she identifies as black and changed her looks to reflect how she feels on the inside: “[T]he decisions that I have made along the way have been to survive and to carry forward in my journey and life continuum.”

To say that the social media outcry has been massive is the understatement of the year: In the course of a single day, a previously little-known social justice activist spiked to a 100 score on Google Trends, the search engine’s metric of what the Internet is talking about. At two different parties I attended last weekend, she was all anyone talked about, and even my running partner during a 5K kept bringing her up between breaths. What was she thinking? How long did she think she could get away with it? And most importantly: How the heck was her hair game so on point?

The last viral image to dominate both social media and real-life conversations to such an extent was undoubtedly #TheDress, a photograph taken of a black and blue dress on Tumblr that gave the bar patrons of America something to debate over drinks: What color was this thing anyway? While a number of memes have used #TheDress to poke fun at Rachel Dolezal (“Is she black or white and gold?”), the allure of both a photographically chameleonic dress and the Dolezal case have a lot more in common than one might initially assume.

I wonder what color #RachelDolezal thought the dress was?

#TheDress was such a viral phenomenon because it divided people into disparate camps based on how they saw this unassuming image. According to the linguist Ferdinand de Saussure, a sign—whether it’s a word, object, or sound—is made up of a signifier (the thing itself) and a signified (what the thing means to us). Thus, if I show you a picture of an old woman (a signifier), you may recognize her as your grandmother (the signified). In my case, however, your grandmother may be a stranger, a greeter at my local Whole Foods, or (if we are related) my grandmother, too.

Signifiers often mean different things to different people, and in the case of #TheDress, there were multiple signifieds: the Black and Blue camp, the White and Gold camp, or the I Don’t Care, It’s Just a Dress camp. Although Gizmodo’s Analee Newitz called #TheDress “aggressively apolitical,” it mirrored political debate in that people felt compelled to defend their position on the matter. It was harmless—and easily explainable by science—but it shocked us by questioning something we took for granted: what we see when we look at the world.

Remember #TheDress? Experts say what colours you see say a lot about how you view the world: http://t.co/lDc5nCoKao pic.twitter.com/v0X37pqC8s

As far as #TheDress is concerned, this came down to the complex biology of color perception; color is not objective but a subjective reflection of the ways in which our eyes take in the light reflected off of objects. With the Rachel Dolezal story, however, how each of us understand it is indicative of how we frame our lived reality in America. For people of color and their progressive allies—those who have watched the events in Baltimore; Ferguson, Missouri; and McKinney, Texas, unfold over the last year—it’s another confirmation of the dangers of unchecked white privilege in America.

Why did Dolezal feel it was OK to appropriate the culture and lived experiences of black people? Because she knew she could.

Whereas whiteness can be a deadly force that claims innocent lives (as my colleague Derrick Clifton argued was the case in Charleston, South Carolina), being part of a dominant group engenders a sense of ownership, including the entitlement of claiming an identity that isn’t your own. Why did Dolezal feel it was OK to appropriate the culture and lived experiences of black people? Because she knew she could.

But as Tamara Winfrey Harris explains at the New York Times, it’s not that easy, because the choice only works one way: “Ms. Dolezal’s masquerade illustrates that however much she may empathize with African-Americans, she is not one, because black people in America cannot shed their race…  I will accept Ms. Dolezal as black like me only when society can accept me as white like her.”

However, on the opposite end of the political spectrum, the Rachel Dolezal case is an embodiment of racial panic in a changing America. As the country becomes increasingly diverse—it’s estimated that by 2045, white people will be a minority in the U.S.—Dolezal offers the ultimate straw man, a conservative’s wet dream.

As Arthur Chu explains in Salon, it’s “a perfect narrative for skeptics of anti-racist work to mock and discredit every white anti-racist ally in the world by tarring them with Rachel Dolezal’s spray-on bronzer.” Chu argues that it allows critics “to claim that there’s no real racial prejudice black people face anymore so all that defines blackness is the cachet that comes from historical oppression, and being black is therefore a privileged status.” After all, if being black in America is so hard, why would someone choose to be black? Why would you go to such absurd lengths to lie about your identity if it didn’t benefit you?

When my parents, grandparents, and relatives look at a photo of Rachel Dolezal, I know they don’t just see a different signified than I do—as if we’re looking at two different people altogether. Even moreso, I know they’re looking at another America, one in which they increasingly feel powerless to curb the changing boundaries of identity. While many compared Rachel Dolezal to Caitlyn Jenner because of a nebulous notion of identifying as “transracial”—the idea that choosing race is the same as honoring your self-determined gender identity—what connects them is that, for conservatives, their existence is a sign that something has been lost.

The thing that separates Rachel Dolezal from #TheDress, of course, is that it’s not just about the fictiveness of perception but about a cultural consciousness that’s deeply divided on issues of race. It’s about those who refuse to recognize the people of color for whom Rachel Dolezal isn’t just a meme or a juicy piece of gossip; race is their everyday reality. Sure, race—like color itself—is partially a construct, but it’s a construct that’s very powerful in today’s America, especially for those who don’t profit from that system in the way Rachel Dolezal has. Why could Dolezal benefit from being black? Primarily because others never have the choice to do so.

But if #TheDress made us all more resolute to stubbornly hide out in our own camps, I hope Rachel Dolezal forces us to see her photo from the eyes of those in Ferguson and Baltimore. In addition, I hope it forces us to look at our country itself the way they would. It might seem like there are two Americas from the perspective of Twitter—but if you’re waking up in Charleston this morning, there’s really only one.