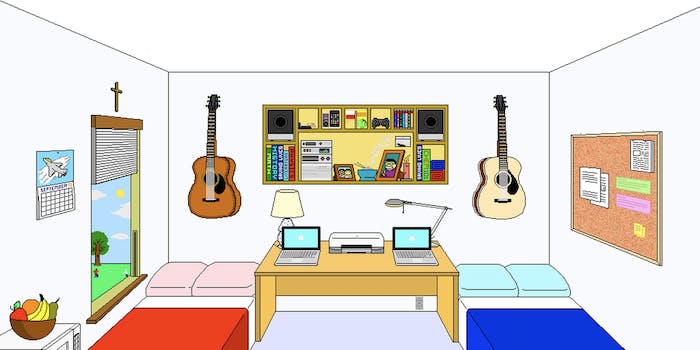 Why an app can’t pick your perfect roommate

As incoming college freshmen across the country prepare to begin a disappointing and expensive journey through the Ivory Towers of America’s richest daycares, many will be most concerned with who their roommate is. And not unjustly: A 2011 Michigan State University study found roommate conflicts were among the most common causes of students dropping out, matching mental illness and a loss of financial aid.

So it’s not surprising many colleges are finding new ways to pair roommates, but not without some controversy. As many schools give blessing to roomie-matching apps like Roomsync, RoomSurf, and RoommateFit, it’s hard not to wonder if schools and students should be trusting the same predictive technology found on OkCupid and Match.com.

As we entrust more and more of our life decisions to increasingly predictive software, it’s worthwhile to sift through exactly what decisions can be handled by algorithms at this point. While computers are well equipped to handle high-level calculations, some responsibilities are simply not ready for what writer Clive Thompson calls our “digital brain” (as opposed to our organic one).

The complex social dynamics of a roommate—combined with the priorities of the school to build a diverse experience and living space—make it a poor solution to be left to big data or social media alone.

So compatibility software found on dating or roommate sites works like this: Individuals answer simple questionnaires and are paired with people who gave similar answers. Simple, right? The more questions answered, the more points of data one can match, and therefore the more accurate a pairing. It’s why OkCupid reminds its users to both submit and answer as many questions and quizzes as they can, and this is how most housing apps work.

Just as well, services like RoomSurf and Roomsync, which rely on students’ existing social media profiles instead of surveys to match them, are not so far off the mark. A 2010 University of Texas study found Facebook profiles actually do line up quite well when compared to that person’s actual personality, meaning students are getting a good reading when they try to create their own compatibility.

However, a college roommate is not a significant other (at least not inherently). A year spent with someone very different than yourself can, in fact, be beneficial. “This is an institution of higher learning, and we expect [students] to learn and think,” Larry Davis, associate residence life director for the University of Wisconsin at Madison, told the Wall Street Journal, “and taking on a random roommate is a good experience to have.”

And not simply in a self-transcendent manner, but in a practical one. As an increasing number of college graduates find they need a roommate to survive soaring rental rates and still-damp job prospects, learning to resolve conflict with a different personality is as important a skill as keeping a savings account or managing your credit.

It’s for this reason many colleges have traditionally kept the roommate decision fairly manual. Amherst College, for example, sends first-year students a simple, 19-question survey then pair roommates by hand. While they certainly “pair the neatniks with the cleaning fanatics,” they explicitly avoid matching students that share a home state or a major in order to impart the lessons diversity of experience and interest can bring.

Stanford is actually representing a common idea in the study of automation. While computers most certainly handle certain jobs with more efficiency than a computer, it’s when humans work with computers that the best job gets done (known as “the centaur theory”). As futurist Kevin Kelly wrote for Wired magazine, “You’ll be paid in the future based on how well you work with robots.”

Stanford accomplishes this by trusting the algorithm to more easily sort those factors like gender and amd whether a student smokes or not (it’s no mistake those categories are binary values) and the students to understand what makes a good pairing while still placing diversity—both of ethnicity and personality—as a priority.

“They have to have similar bedtimes and similar social and cleanliness levels just so they want the same thing out of their room,” Kelsey Davidson, a junior given this responsibility in 2010, told Stanford’s student paper. “After that, it’s a balance between making sure they have something in common that they can bond over and making sure they’re different and can learn from each other.”

Compare Stanford’s hybrid solution to the offerings of Residence, a software package from the Symplicity corporation. While the software mostly seems to help housing departments manage the semantics of running an office, it also offers the “Smart Assignment Engine.” From the brochure: “All freshmen room assignments are automatically generated and no technical expertise is required!”

Assigning roommates is a poor job for such a software simply because the factors to consider are not easily quantifiable. How do you measure the success of a housing program when your priorities have to be balanced between reducing conflict and enriching students lives? It’s not something that lends itself very easily to computation.

In our societal rush to build an app for everything, it’s deceptively important decisions like assigning dorms that we will find most often short of handling the chaotic cacophony of human behavior and expectations. While software might be great at realizing an early bird shouldn’t share a room with a night owl, it cannot yet handle the value of pairing the farm boys with the city slickers. If we want the social lessons from the dorms to remain as valuable an education as what happens in the lecture halls, the human instinct that makes the former possible must for now remain.