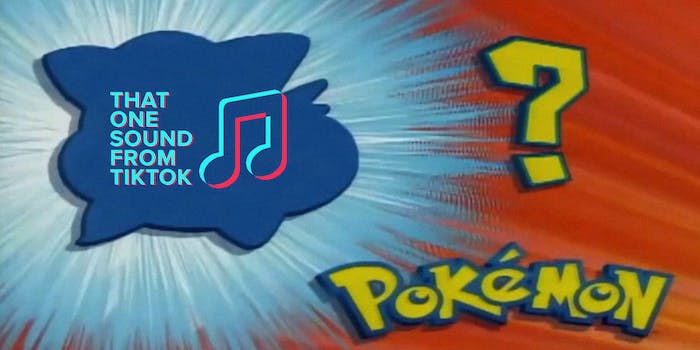 ‘Who’s that Pokémon?’ gets another life on TikTok

The audio originated on YouTube 14 years ago. Now it's all over TikTok.

So many pieces of audio from Vine have ended up on TikTok, its spiritual successor. But one goes back even further than Vine. This week, we look at the 14-year-journey of “Who’s that Pokémon?”

The long-running Pokémon animated series used a commercial bumper segment to identify various Pokémon. The sound that’s going around on TikTok features the prompt—”Who’s that Pokémon?”—followed by a man screaming, “It’s Pikachu!” When the silhouette is revealed to be Clefairy, he responds, ‘Fuuuck!”

The most popular audio was posted by user Mike Berry in March 2020. It’s been used in more than 128,000 TikToks since then and applied to an array of life situations where you believe one thing and then are presented with a less ideal reality.

Clefairy sounds a little like “the variant,” or maybe that’s just what I hear after watching so many people use the sound to reveal they have COVID.

One TikTok account, jeanmichel_martel, became popular for its surrealist take on the segment.

The sound on TikTok is from a Vine from Sammy San Pedro Cruz, which circulated in 2015.

But it’s actually a re-do of an earlier “Who’s that Pokémon?” reaction from September 2007. As detailed by Polygon in 2017, when he was 13, Thomas Karrel filmed his older brother, Owen, reacting to the game. Owen also guesses it’s Pikachu, but when it’s revealed to be Koffing, he lets out an anguished “Goddammit!”

Thomas posted the 13-second clip to YouTube when it was still a new-ish platform, under the account gameboy659, which still only has one video. The clip now has more than 6 million views, though Karrel told Polygon he was served a takedown request at one point.

“Who’s that Pokémon?” became a meme in the 2010s, but the fact that the original is still so enduring is something of a feat. Karrel told Polygon: “There was definitely something about YouTube being a young site when that video came out that contributed to its success.” He said then that he shied away from the attention the video brought him, but his aim was pure: “I just want people to remember the video as a stupid, funny thing that a kid who loved Pokémon thought was cool.”