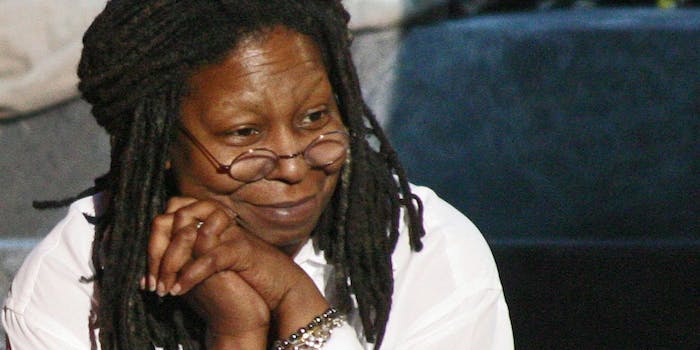 Whoopi Goldberg made headlines yesterday when she interrupted The View’s discussion on flu shots with an audible fart. The set was stunned only for a moment before Rosie O’Donnell started fanning the air in supposed reaction to the unpleasant smell. Laughs all around. The whole ordeal only took up about 30 seconds of airtime, but that was enough to spark some chatter on the Internet.

The reactions were pretty much what you would expect: “Gross!” “Ew!” “How embarrassing!” But there is always the eye-rollingly sexist side to the Net that we can expect to hear from when a woman does something—anything, really—in public. For example:

And in response to a person who expressed amusement at the incident:

These specifically gendered responses—employing terms of “class” and being ladylike—are interesting, especially given the fact that studies show that men and women, on average, pass around the same amount of gas. In fact, some studies show that women’s farts actually smell worse than men’s.

Yet when we consider the way flatulence is presented in pop culture, those who are allowed to partake in this particular brand of comedy are overwhelmingly male—and it’s part of the reason the movie Bridesmaids got so much buzz. Books like The Gas We Pass and Everyone Poops are generally considered household titles, so if we didn’t live in a world where austere attitudes toward women’s bodies weren’t so heavily documented, this humorless attitude toward normal bodily functions like flatulence would seem unusual.

From the much-decried douche, designed to eradicate “feminine odor” (even with studies that show these products are harmful to women’s health) to the more extreme Poo-Pourri, whose marketing messaging admits that it seeks to uphold the myth that “girls don’t poop,” the fact of the matter is that there’s a bit of a double standard when it comes to pooping and farting.

Whoopi Goldberg’s poot wasn’t the first to occur on air, after all. Regis Philbin farted on air with Kelly, and Larry King farted during an interview once. And while there is some speculation to whether these were actual farts or the sound of a coffee mug sliding on the table, etc., the comment sections were, regardless, much different.

And about Larry King:

This difference in attitude toward the farters in question can be traced to deeply ingrained beliefs about women and discomfort around the realities of their bodies. In a recent article on New Statesman that began about breastfeeding, author Glosswitch delves into the idea that any behavior that reveals women are flesh-and-blood humans and not just “surface-only propositions” incites discomfort (and anger) in a culture that has dictated women’s non-personhood. She writes:

When we lactate in public we might as well be pissing; it’s an indication that beneath our skin there’s just as much blood, guts and passion as one would find beneath the skin of any man. When our bodies leak it’s a sign that we’re human, not dolls. Of course it causes offense. To exhibit any kind of bodily function in public—whether it’s pissing against a wall, spitting in the street, picking and flicking earwax while one waits in a queue is still seen as a male thing to do. We might consider such things disgusting, but men can assume the right to be disgusting in a way that women can’t. It’s understood that male bodies are a part of what men are. Female bodies don’t have the same status. Even though, on a basic level, we know that they work in much the same way male bodies do—we shit, we piss, we perspire, we snore—we don’t really want to know this. A female body remains a thing to use, to own and to look at. It’s not something which does things suggestive of some real, human messiness inside.

As Glosswitch says, our sanitized ideas about what women’s bodies do and are for is more than just that they’re supposed to be absent of “messiness,” although this is certainly part of it, as women are taught from a young age that their bodies are inherently “bad” and dirty.

But this sanitization of women’s bodily functions is also about sex and ownership. Farting and pooping aren’t sexually desirable—at least by the average person—and in a culture that fetishizes every aspect of women’s bodies, the idea that a woman’s anus has a purpose other than for penetration violates the myth that women’s bodies exist solely for the sexual gratification of men.

As the Frisky’s Rachel White notes, the reverse of this logic results in many men bragging about their bowel movements, turning defecation into an act that reaffirms masculinity: to make it abundantly clear that their anuses are not for sexual purposes. Farting, therefore, might serve as some kind of strange, smelly defense against homosexuality. These double standards uphold the idea that women’s buttholes are for sex (even if only on a fantasy basis) and men’s are not. A woman farting breaks some unspoken agreement that her body exists for men, and not for herself.

Whoopi Goldberg, by unapologetically pooting on-air, has broken that code. But this isn’t the first time that Whoopi has made headlines by showing the world the reality of women’s bodies. In 2010 she appeared in a campaign for Poise light incontinence products, educating the public about Light Bladder Leakage. The commercials approached an embarrassing issue from a humorous angle, with Goldberg appearing as various women of history, including Joan of Arc and Cleopatra; in each segment, Goldberg discusses the fact that wetting yourself a little when you laugh or sneeze isn’t as uncommon as you think. After all, 1 in 3 women do it.

By using these famous historical figures, Goldberg was able to shed light on something that has an effect on a huge population of women who might live with daily shame because of their “condition.” Talking about women’s bodily functions in such a public way was undoubtedly powerful and slyly radical, but a look at the comments on Poise’s YouTube page that the attitudes about female bodies are the same old story. It’s reminiscent of a memorable line from 30 Rock: “Love is wearing makeup to bed and going to the Burger King to poop.”

A simple Google image search can give you an idea of the way bodily functions is viewed along gender lines. A search of “girl farts” provides a selection of cartoons and memes, most of which center around the idea of unicorn breath and lavender being among the contents of women’s flatulence, along with images depicting the apparently universal experience of women attempting to hide their farts/poops from their significant others. Most common are depictions that compare “girl farts” with “boy farts,” all the illustrations of girl farts being pink and pretty and feminine. Googling “boy farts,” on the other hand, provides a prime illustration of the way we view male flatulence: lots of links to videos of teenage boys lighting each other’s farts on fire, Austin Powers and Fat Bastard farting, and stills from South Park where Kyle and Cartman fart in people’s faces, etc.

In these visual representations, attitudes toward women farting tell us a lot about attitudes toward women in general, especially black women. Apparently this isn’t Whoopi Goldberg’s first time farting on-air—she let one slip in 2011 as well—and one look at the comment section in that case reveals some truly heinous invective (which I will not repost here, as they are incredibly triggering). As recent as three months ago, commenters have thrown around the “N-word” with ease, calling Whoopi “animalistic” and “ghetto trash.” This reaction to Goldberg’s femaleness, but also her blackness, tells us that farting—like anything that relates to femininity—is a complicated issue, one that carries the weight of the farter’s sex, race, and socioeconomic status.

At its root, the idea that a woman farting should make us uncomfortable when male flatulence is merely laughed at tells me that what we’re really uncomfortable with when women fart is the idea that women are human. In Whoopi’s case, her humanity is even more deeply in question. When someone who farts is criticized with language that employs class, gender, and racial terminology, farting is not only a feminist issue, but one of privilege, a right to one’s own being.

But there is a bright side to all this. On Twitter, the attacks on Whoopi’s race and femininity were common. But just as common? Tweets that supported her or just plain just laughed it off. More impressive were the number of people that criticized Whoopi Goldberg not for her flatulence, but for her rape apologism and defense of Bill Cosby. Have we reached a point where having apologist attitudes toward rape are more offensive than a woman violating the “feminine code” of flatulence? I hope so. What a world that would be. Even if it doesn’t always smell great.

Note: A rep for ABC has since stepped forward to say that no actual wind was broken: Whoopi didn’t actually fart but was merely responding in a fun, spontaneous way to a sound effect gag. It’s almost a trick played on the audience, designed to reveal our attitudes about women and flatulence. Whether what we heard was an actual fart or not, the reactions to said fart are genuine, and more interesting still is the fact that a rep needed to comment on a fart at all. This flatulence (real or fake) is truly the fart heard ’round the world.