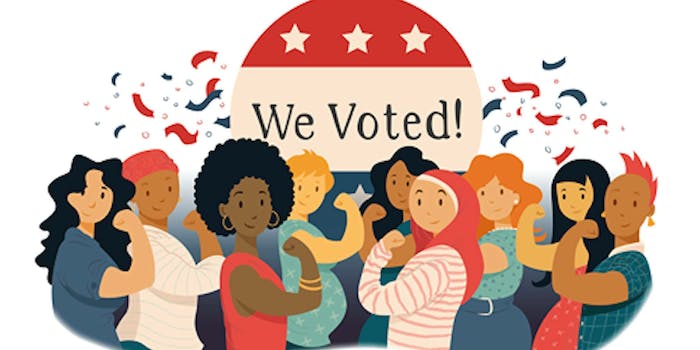 The problem with how we celebrated #WomensEqualityDay

Can we really call it a celebration of all women?

What does “equality” mean, anyway?

August 26 was #WomensEqualityDay, an event celebrated widely on social media to mark 95 years of gender no longer being a barrier to voting rights—otherwise known as suffrage. Virtually every non-profit that cares about women’s issues participated in the online campaign, taking the opportunity to highlight the many causes women still fight for today. But, as usual, tech companies and major brands got in on the action as well.

Thirsty as ever to remain hip to social media trends, Facebook plopped a commemorative graphic at the top of everyone’s news feeds Wednesday, with a celebratory, yet inaccurate phrase: “On Aug 26, 1920, women achieved the right to vote in the U.S.” To make matters worse, the image included women of many racial and ethnic backgrounds posing in homage to the iconic image of Rosie the Riveter, to the backdrop of a patriotic “We Voted!” button.

There’s just one problem: August 26, 1920 was the day that white women achieved the right to vote in America. For women of color—many of whom were silenced, ignored or racially discriminated against within the early feminist movement—white supremacy still reigned supreme at many ballot boxes; their right to vote was far from achieved.

If we’re being historically accurate, the hashtag would instead look something like this instead: #WhiteWomensEqualityDay. And the observance is an important reminder of the need to have racially inclusive, intersectional approaches to political issues.

Retweet to show your support. pic.twitter.com/PmrkjHdlst

Too many women still earn less than men on the job—and women of color often lose out the most. This needs to change. #WomensEqualityDay

The notion of “equality” remains the focal point of many social movements, including the push for the equal rights of women. But equality means different things for different people, depending upon each person’s collection of identities—which include race, class, sexual orientation, gender identity, ability, faith, nationality, among others. The notion of womanhood and who gets to appreciate that identity fully, per the ideologies of the time, was limited by the racism and bourgeois politics of white feminists.

Before the 19th Amendment eliminated the gender barrier on voting, it was originally limited to white, landowning men. Naturally, for many of white women leading the movement, the right to vote was a next step toward equal rights to the ruling class, one that could ultimately prove beneficial for all women. In theory, fixing a problem that cut across lines of gender was still a net gain. But in reality, the vote was an issue that only a specific set of women could enjoy.

Even with the elimination of the gender barrier, people of color—including women and men—still were subject to racialized voting taxes, voter literacy tests, or roves of vigilantes using violent force as a deterrent against their vote. Even further, racial segregation was still legally enforced. These two issues, among others, catalyzed the Civil Rights Movement, as led by many black Americans, because their political disenfranchisement made it all the harder for them to be recognized as full-fledged citizens under the law.

And that movement, as Ava DuVernay’s Oscar-nominated film Selma shows in part, had plentiful leadership and strategy from black women—even if most historical accounts paint black and white men as the primary force in achieving civil rights, including the Voting Rights Act. Even to this day, as Time‘s Heather Jones and Charlotte Alter note, there’s still a dire gender imbalance in Congress, with an overwhelming majority of men representing a country that has a roughly equal split of men and women.

If they don't give you a seat at the table, bring in a folding chair. #WomensEqualityDay pic.twitter.com/alnKEc5L9h

When we mark occasions like #WomensEqualityDay, it’s important to not take a revisionist approach to history. But even further, flaps like the Facebook graphic (among many other social media posts) show why it’s all the more important to learn about how social and political movements have evolved in America. Without learning how we’ve arrived to the current era—and using that knowledge to informed how we fix contemporary problems—there’s a credible risk in leaving many important struggles only solved for people who already have a great deal of privilege in society. That includes not only feminism, but also many other ongoing political movements.

For example, many activists and writers long decried the push for equal marriage rights, but not because they hate LGBT people. Instead, they highlighted many of the same pitfalls evinced by the women’s suffrage movement. Instead of prioritizing and primarily funding issues that cut across a variety of sexual orientations and gender identities—such as employment non-discrimination, youth homelessness, the decriminalization of sex work, and the rights of transgender people—marriage became the focal point. And those politics left too many people out.

Having non-heterosexual relationships recognized by the law remains important for families of many backgrounds. Yet there’s also a need for the state to support families outside of the nuclear model—because single people, networks of chosen families, and other non-traditional relationships also deserve many of the benefits otherwise reserved to married couples. With a different approach—and the inclusion of people beyond affluent (and often white) gays and lesbians into the mainstream movement—change could’ve worked from the bottom up, rather than functioning as a trickle down.

Celebrate #WomensEqualityDay with us by sharing the words of the fierce @Lavernecox! pic.twitter.com/m6xS5cjJ0H

For some people, the recent SCOTUS ruling is indeed equality. But it’d be disingenuous to ever declare the day of the 5-4 decision as #LGBTEqualityDay—because it wasn’t the end of the battle for justice for people of all sexual orientations and gender identities. Rather, even with the widespread celebrations, rainbow-filtered photos on Facebook and even the colors of the flag illuminated on the White House, the ruling was still just the beginning.

If there’s a lesson to be learned from the #WomensEqualityDay celebrations on social media, it’s that “equality” shouldn’t necessarily be the goal. Rather, justice should be the goal, an approach that ensures everyone in shared community—in our neighborhoods, cities, states, and even as a nation—can enjoy the civil rights and freedoms that each person needs to survive and thrive.

Otherwise, an approach that doesn’t emphasize the need for intersectionality is just a waste of our time, efforts, and political energy. And, even worse, it leaves people we know and love behind.

Editor’s Note: As a gender non-conforming, gay person, the writer of this piece acknowledges that they do not identify as a woman, and also embodies identities subject to gender-based discrimination, from a distinct, different vantage point.