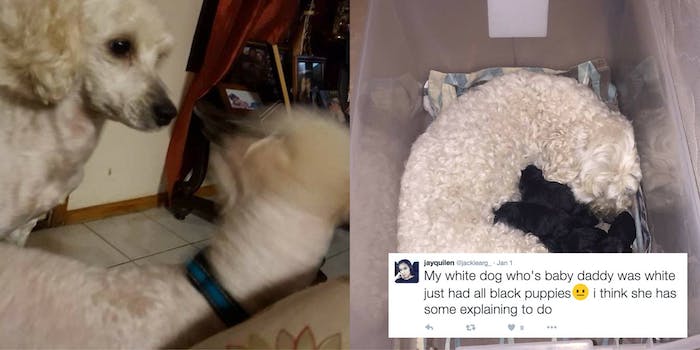 'Maury' needs to get to bottom of this.

My dog is giving birth sometime this week & we couldn't be happier pic.twitter.com/K5oNvGbjo0

But instead of having white puppies, Mocca gave birth to a litter of black puppies…

Leading Arguello to believe that her dog’s partner was, um, not the pawther.

This is my dog & her baby daddy…

& this is my dog & her babies. pic.twitter.com/5ArMeAsMF3

“When I saw her first baby be born, I thought it was funny that [the baby] was black,” Arguello told BuzzFeed News. “And then the next one was black, and the next, and the next!”

Yes, this is definitely a paternity mystery only Maury Povich could solve.

Arguello said their family wondered if Mocca had somehow got out and bred with another dog without their knowledge—until that point, the other bichon frise had been the only dog the family allowed Mocca to be around. So when Mocca got pregnant two weeks after the dogs’ meet-cute, Arguello’s family thought he was the father.

After the birth of Mocca’s litter, they, and everyone on the internet, were shocked to find out otherwise.

OK, so maybe Mocca isn’t running around on her would-be baby daddy. According to, well… science? Gregor Mendel? Genetics? This is completely plausible.

In dog genetics, the “recessive black” gene is a thing that very much exists, and can even be possessed by white dogs—Mocca and her partner could both be carrying the recessive black gene (without expressing it, because they both have white coats), and therefore passed both recessive genes onto their pups, causing them to have black coats. Without knowing more about each dog’s genetic makeup, however, no internet dog diagnosis is certain.

Aguello told BuzzFeed News hat she doesn’t plan on getting an actual pawternity test done, and is just enjoying the newborn litter.

“I’m just happy we have beautiful healthy pups and eventually we’ll see if they look like daddy,” Arguello said.

When someone other than you talks shit about your dog pic.twitter.com/os48RzbWeC