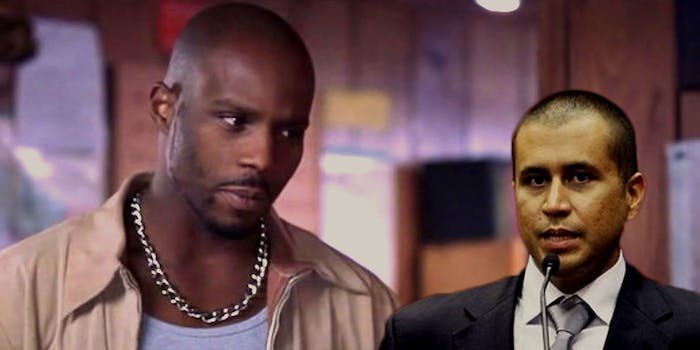 The promoter of the fight is accused of stirring up racial tensions for money.

As of today, the rapper DMX is set to fight George Zimmerman, a statement that’s both unbelievable and depressing.

The celebrity boxing match, promoted by Damon Feldman, pits a drug-troubled rapper against a man recently acquitted in a murder trial—and all three of these men stand to make money.

Aside from information regarding the fight’s date—March 1—the details of the arrangement are awfully thin, though its announcement has already received a wealth of criticism online, most notably in the form of a White House petition designed to stop the fight. Titled “Stop George Zimmerman and Promoter Damon Feldman for using murder & racial hate in America for Profit,” the petition has already gathered 515 signatures by 10am CT.

That figure’s growing quite quickly. Just 30 minutes ago, the number was at 215.

The petition focuses on Feldman’s history as a celebrity boxing promoter before addressing his decision to use racial tensions for profit.

“The entire idea of this event is to use racial tensions to lure people in to purchase the event,” it says. “This will only hurt America as it will continue to stir up racial tensions that have been ongoing in this nation for quite some time.”

White House petitions require 100,000 signatures before requiring action on the part of President Obama’s administration. Considering past statements, it’s reasonable to believe the president will be the one providing White House reaction.