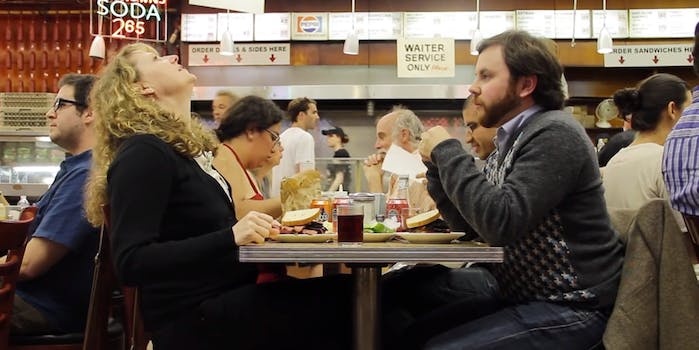 Katz's Delicatessen’s most popular item is back on the menu.

Katz’s Delicatessen’s most popular item is back on the menu.

Improv Everywhere has been pulling off elaborate viral stunts for years. More recently, they’ve been appealing to the inner-movie geeks in all of us by recreating iconic movie scenes from films like Rocky and Raiders of the Lost Ark in public places for their new series “Movies in Real Life.”

This time, they went back to the scene of the crime for their latest recreation: the iconic fake orgasm scene from When Harry Met Sally.

In the original, the rest of the unsuspecting crowd looks on in amusement and horror as Meg Ryan puts on a show for Billy Crystal, but this time around, the audience is in on the fun. Along with casting lookalikes for Harry and Sally, Improv Everywhere recruited 20 pairs of men and women to sit at Katz’s, where the scene originally took place, and join in faking it with Sally—all without the restaurant’s knowledge.

Katz’s employees have seen plenty of people recreating that scene since the film came out in 1989, but it’s probably safe to say they’ve never encountered anything this orga … nized.