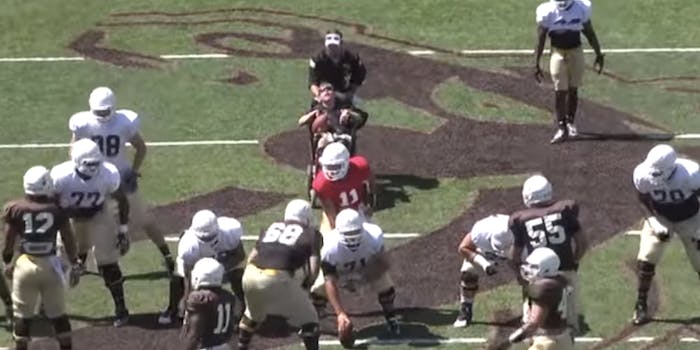 Here’s a feel-good story that does not involve ice and buckets.

Here’s a feel-good story that does not involve ice and buckets.

The Western Michigan University Broncos started its college football season by handing the ball off to one of its biggest fans during practice and ushering him into the end zone.

John Mulhearn, a wheelchair-bound diehard fan of the Broncos, was handed the ball near midfield and guided by his dad Sean, a former linebacker at WMU who played in the 1989 and 1990 seasons. Technically speaking, the two were lined up in the I Formation for the play, and they drove the ball all the way to the end zone, where they were met by cheering Bronco teammates.

Sure, this act of kindness is hokey and carefully orchestrated, but the YouTube title says it all: “A Bronco touchdown worth more than points.” Who could ask for more than that?