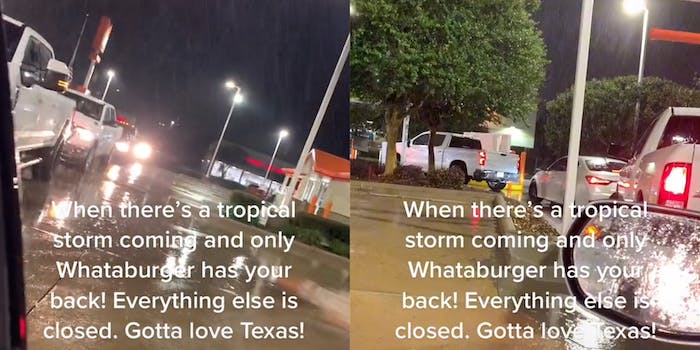 In a viral video, @littlehellion86 praised Whataburger for staying open during a tropical storm but TikTok commenters criticized the working conditions.

The 5-second video has amassed over 242,000 views and 14,000 likes since posting 14 hours ago, and shows a long drive-thru line at Texas fast-food chain Whataburger apparently amid Tropical Storm Nicholas, which has left about 500,000 without power as of Tuesday.

Captioned, “When there’s a tropical storm coming and only Whataburger has your back! Everything else is closed. Gotta love Texas!,” the video expressed appreciation for the Texas burger franchise for staying open during Tropical Storm Nicholas. Tropical Storm Nicholas hit Houston and swept through Southeast Texas last night before weakening and heading toward Louisiana.

While the video lauded Whataburger for providing food during the storm, some of the hundreds of commenters thought the fast-food chain shouldn’t keep workers during extreme weather conditions.

“Need of the $$$… Feel sorry for the employee… God keep them safe going back to their loved ones,” says @herlindasanmiguel5.

“I use to work at Whataburger and we would still have to work in the worst weather conditions it was the worst thing ever,” says @marhsmallow_171.

“ooohhh do I feel sorry for the workers,” one of the top-favorited comments added.

Other commenters were proud of the Texas chain for serving food during the storm and noted that its drive-thru lines are always long.

“thats cause we love whatsbizzle and treat them with respect,” says @zach.

“That line is LITTERLY everyday at Whataburger,” says @lepperconlenny.

The Daily Dot reached out to Whataburger and @littlehellion86 for comment.