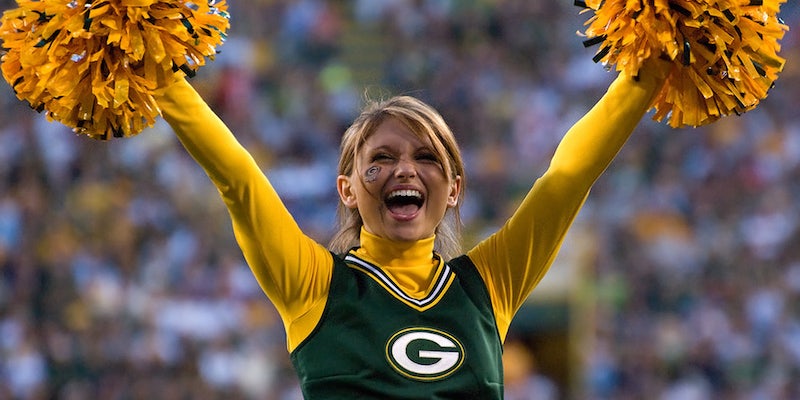 This is what the NFL thinks about women

A few days ago, NFL Commissioner Roger Goodell, the supposed “enforcer” of the league, made the decision to suspend Baltimore Ravens running back Ray Rice following an incident wherein Rice knocked out his then-fiance and proceeded to drag her out of the elevator.

The suspension will last two games. Given the severity of Rice’s actions—and the lenience Goodell showed in his determination—the implications of what this says about the NFL’s relationship to women is alarming.

With Rice, the suspension feels particularly mishandled when considering the the inconsistent precedent it sets compared to other offenses. TIME‘s Eliana Dockterman astutely notes, “NFL Commissioner Roger Goodell has suspended players for longer because of DUIs, smoking pot and illegal tattoos. Fourteen other NFL players have been suspended in 2014, all for drug use—performance-enhancing or otherwise.”

Understandable rage has been registered about this. Many have taken to social media to express their disgust, and for several nights, ESPN’s Keith Olbermann has directed scathing indictments at the NFL and the modern sports world in general.

Not everybody has reacted so appropriately, though. Certain Baltimore fans have been overly quick to defend Rice, online and on the field. And First Take panelist Stephen A. Smith made it pretty clear this week that it’s a woman’s own responsibility to prevent herself from getting hit. (Smith has since been suspended for his comments.) Before that, the Ravens general manager, Ozzie Smith, wondered if a “different story” (e.g. one where Rice was not at fault) would somehow emerge.

The Rice incident reveals the NFL’s attitude towards women to be undeniably abhorrent. And yet, the the relationship between the two is more complicated than that. The fact is, there are plenty of female football fans out there, and the NFL needs them as much as they need it.

There’s no question that the NFL isn’t the only place in American culture where sexism and outright misogyny run rampant—with celebrities like Woody Allen, Roman Polanski, and Terry Richardson mired in high-profile sexual assault scandals. The suggestion that famous people are allowed to get away with murder is not entirely without merit. If celebrities are given extra privilege when it comes to the legal system, then athletes may be the worst of all in this regard. The amount of professional football players with rap sheets is staggering. Some have been acquitted of the crimes of which they’ve been accused, and some haven’t. But the NFL’s violent streak is potent.

So maybe the NFL doesn’t only have a violence against women problem—but a larger violence problem, too. Nevertheless, the evidence that the NFL breeds toxic behavior towards women is overwhelming. Moreover, if Jameis Winston is any indication, there’s plenty of evidence to suggest that this behavior exists before players get to the NFL as well. No one is going to say that the crimes of someone like Michael Vick, who famously went to jail for dog fighting, weren’t entirely heinous either. But hurting an actual person (read: a woman) is inherently worse.

In an article entitled, “Face It, Women: The NFL Does Not Give a Shit About You,” Jezebel’s Erin Gloria Ryan points to the Rice decision as merely the latest in a long history of misogyny in professional football. “Throughout its nearly hundred years of existence, the NFL has had countless opportunities to prove that it valued women as human beings, as anything more than a less-than-tapped market,” Ryan writes. “And every single time, it has failed spectacularly.”

Then there’s Jovan Belcher, who shot his girlfriend before killing himself. Let’s also not forget O.J. Simpson in all of this.

What these examples denote is a system that not only doesn’t value women, but which actively mistrusts and punishes them. As ESPNW’s Jane McManus puts it, “There can be suspicion toward women among pro athletes—women are often characterized as gold-diggers, financial predators in high heels. It’s an us-against-them way of looking at gender relations.”

That suspicion, that women are only interested in sports as relative to what they can get from men, creates a culture of exclusion. As if they can’t like sports just for themselves. Like the conversation around Michael Sam, it generates a profound sense of “anything but straight men is wrong.”

Some seem to believe that bringing more women into the world of football will soften the game, taking away everything people love about it. In writing a profile on Dr. Ann McKee, a neuropathologist working to stop concussions in football, and a huge Green Bay Packers fans, Jane Leavy at Grantland was careful to mention, “War-painted denizens of the upper deck may view her as The Woman Trying To Destroy Football.”

Yet despite this culture of exclusion, the NFL must also rely on women at least in part if they want to maintain their power. Polls show that 44 percent of all NFL fans are female. And last year, the New York Times found the NFL had tremendous success with marketing apparel to women. Bloomberg Businessweek also highlighted the way the NFL courts female fans, with their Ira Boudway observing, “The push for female fans includes print advertising buys, a new series of TV spots that will run during games starting this week, expanded merchandise offerings, and pop-up clothing boutiques at stadiums.”

The NFL says they’re doing more to address safety concerns too, but in the New York Times piece, Natalie Kitroeff claims that despite popular belief, “it is not clear that female fans view the risks of the game any differently than men.”

The other part of the NFL’s big play for female fans is their Pink campaign, designed to create awareness for breast cancer.

However, most of these efforts are basically predicated on the idea that female fans want to buy things. In addressing this and other concerns she has as an NFL fan, The Atlantic’s Shawnee Barton remarked, “I love a form-fitting, logo-emblazoned throwback blazer as much as the next gal. And it’s understandable that the NFL tries to boil female interest down to clichés—marketing, after all, is marketing. Yet the focus on merchandising both misses the real reasons women watch sports and forgoes an opportunity to engage them in far more meaningful—and for the NFL, lucrative—ways.”

Even with the Pink merchandise, the NFL is more about profit than anything else. Only a small percentage of the revenue generated from the campaign goes to actual breast cancer research, proving that there’s a big difference between the NFL’s version of “awareness” and committed funding.

In analyzing the monetary repercussions that the Rice fallout could have, Mina Kimes at ESPNW speculates that even now, “women represent a huge growth opportunity” for the NFL. Kimes acknowledges the disgrace of the whole thing, but cautions that since the NFL doesn’t appear to care about female fans from a moral point of view, they should at least think about how their actions look to women from a financial perspective.

This really is the issue here, however. It’s a sad truth, but the NFL isn’t likely to think about women in these types of situations except for insomuch as whether they’ll sell less Pink jerseys this year. This only makes things more difficult for female fans, who love football, but know the NFL doesn’t view their opinions as a priority.

And the fans aren’t the only women in the NFL apparatus who continue to be marginalized. There are very few women in top leadership positions at the National Football League, for one thing. On the other end, NFL cheerleaders are barely considered employees, and their deplorable work conditions and shoddy treatment demonstrate as much.

Furthermore, although they are not a part of the NFL as much as the world around the NFL, female sports journalists don’t have it much better. For instance, Fox just announced plans to remove Pam Oliver as their go-to sideline reporter in favor of Erin Andrews, a move which many believe has something to do with Andrews’ whiter and younger appearance. Of course, Andrews has also faced the perils of sexism in the past. Not only was was she secretly videotaped and stalked in 2011, radio host Kirk Minihane was suspended this month after calling her a “gutless bitch.”

From its leadership to journalists, cheerleaders and fans, the NFL has constantly sent women one message, over and over: you don’t matter.

But that doesn’t make them any less of a force to be reckoned with. The NFL has problems, but they’re still on the verge of becoming a $25 billion industry. Even fantasy football is a $70 billion industry now, as clearly Americans love their football, women and men alike. And as frustrating as it is, a boycott massive enough to make the NFL change their existing policies isn’t a plausible reality right now.

The NFL’s misogyny is a symptom of American misogyny on a grander scale, but the kind of misogyny in the NFL is so firmly entrenched that for things to change, it’s likely going to have to be rooted out from the inside.

Howard Bloom at Sporting News believes this is possible and has some thoughts on how it could be accomplished.

Goodell could announce he is creating a panel that would include leading women’s and groups associated with domestic violence that will work with the NFL to establish a new policy on how the NFL will deal with players committing domestic abuse. The NFL would then meet with the NFLPA before the Super Bowl and together the NFL and the NFLPA would introduce new and much tougher suspensions for domestic abuse at the Super Bowl. That would send out the right message from the NFL regarding domestic abuse.

Finally the NFL could announce a too be determined percentage of the revenues generated from the league’s ‘Fit for You’ women’s apparel line will be annually donated to victims of domestic abuse—that would deliver an amazing message from the NFL.

Sporting News also talked to several female NFL writers following the Rice verdict, and they had some ideas of their own. Melissa Jacobs, of TheFootballGirl.com, thinks that Goodell could’ve taken a lesson from the NBA, in this matter.

What Goodell needs to do is ride down the street and take some leadership lessons from NBA commissioner Adam Silver. Like the Rice situation, Silver was faced with a situation in Donald Sterling that transcended his league, angering millions. Silver had a choice to make: Was his league going to somewhat tolerate racism or not? He made the gutsy choice, one that was not only morally correct but also serves as a deterrent. Goodell had a similar opportunity to take a stand against domestic violence and failed.

However, the simple answer is there are no simple answers. Things aren’t good for women who love sports right now, and it’s going to take a lot for them to get better. SB Nation just released a report stating that domestic violence is even worse in Major League Baseball than it is in the NFL. The important takeaway is that in the sports world, like in any other world, if you believe that women aren’t being treated badly, then you haven’t been paying attention.

As for the NFL specifically, we on the outside remain, for the moment, powerless to change anything in the face of their supreme imposition. But someday, if enough people finally get fed up and stop paying attention to pro-football altogether, to the extent that it starts to chip away at that $25 billion, then maybe on that day, the NFL will do more for women than a few pink t-shirts.