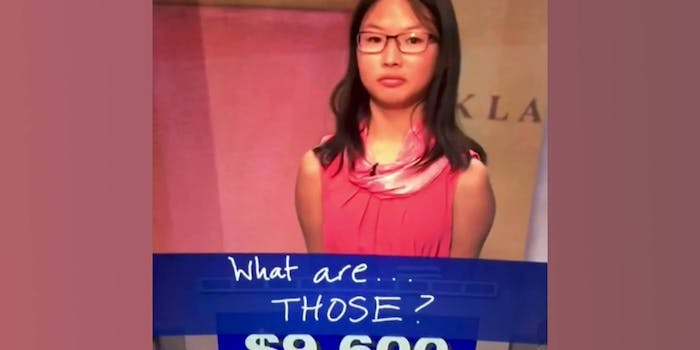 I've got one question for you, Alex.

The “what are those?” meme hit the public conscious last year and has continued to gain steam ever since Young Busco uploaded a video to Instagram showing him yelling down to the shitty footwear of a police officer. Take a look.

That’s it. That’s the entire premise of the meme. It’s goofy and kids love the hell out of it. And finally it’s reached the big time.

During a rousing Thursday night game of Teen Jeopardy!, eventual winner Sabrina was royally stumped when the time came for Final Jeopardy! “Roughly half the size of Texas, it’s the largest structure made by living creatures and can even be seen from space,” host Alex Trebek read. She was stumped, the Great Barrier Reef totally slipping her mind.

So she decided to meme.

This child is a hero https://t.co/sfVwkaUWF3

Sabrina wagered hella cash but still came out on top with $45 and more meme street cred than any teen in the known universe.