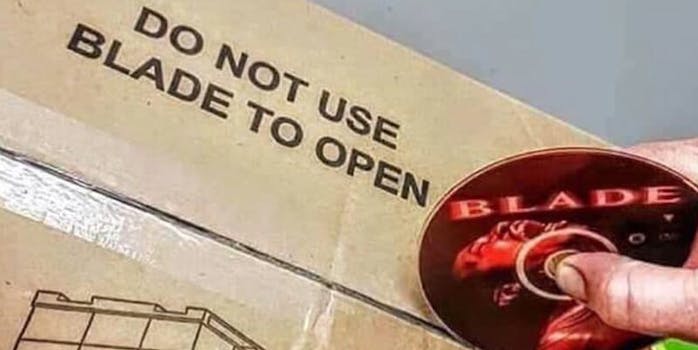 Can you blame his fans?

It’s always a curious thing the way a meme begins circulating, and as more and more people stumble upon them—as is often the case—many incorrectly assume themselves to be the first to discover a meme. These people tend to think of themselves as meme Christopher Columbuses, you could say, even though we all know that Columbus actually didn’t discover anything because they were already native people living in the Americas, who he and his armies went on to murder, rape, pillage, and inflict with disease.

Getting back on topic! It’s got to be especially trying for celebrities to be at the center of such memes and constantly get bombarded with them. (Keanu Reeves would like you to know that he’s doing just fine, for the millionth time.) Case in point, Wesley Snipes has recently been made aware of a viral image of someone “cutting” open a box that reads “DO NOT USE BLADE TO OPEN” with a Blade DVD. Get it? A Blade DVD!

Well, Snipes gets it, and he wants you to know that he has SEENT IT, okay?

And just in case that wasn’t abundantly clear:

It’s difficult to say where the image originated from. There are multiple instances of it having been uploaded on imgur so that’s probably a safe place to start. At any rate, it’s time to chill out on Wesley Snipes’ mentions, everyone. Let the man live.