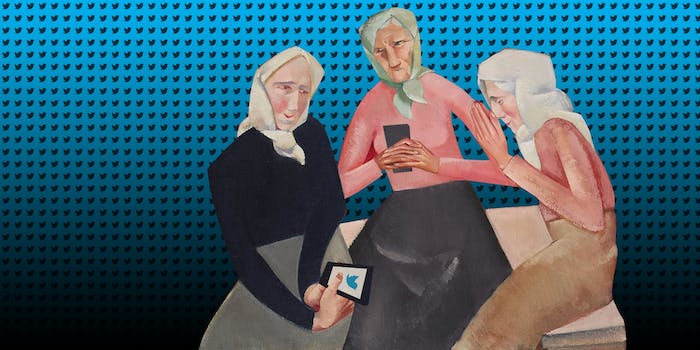 These elderly, church-going women are my new best friends on Weird Twitter

Weird Twitter is a thing that exists. “If you don’t know,” unfortunately there’s actually nothing I can tell you that will sufficiently describe Weird Twitter in a way that could allow me to end this sentence with “now you know.” It’s true.

Even the New Yorker tried to put its finger on the pulse of this phenomenon, and failed kind of miserably. But basically (watch me fail here), Weird Twitter is, by most accounts, inexplicable bits of outré, out-of-context genius from (hopefully) anthropormorphized conceptual personalities (?). They’re sometimes brilliant, sometimes irreverent, sometimes facepalm-batshit-insane, but always weird as balls (and awesome, because of it).

So it comes as no surprise that Weird Twitter’s latest Internet-humor-defying, crowd-concocted amalgamation is a network of profiles belonging to a bunch of elderly, church-going, vaguely right-wing, but intentionally racist AND unintentionally homophobic women (and possibly a few men), whose banal musings about what to bake prior to Sunday mix with basic Twitter/Internet deficiency, a propensity for the Lord, wholesome pop star/good Christian girl Katy Perry, Satan Lady Gaga, and the occasional deep delve into Internet-culture-based hip hop. I’m not joking. And I’m assuming (hoping), based on that, that this bit hasn’t been done before. But then again, it’s the internet.

According to my best guess, there are between six and 40 or more of these “women.” My official “My Church Group” Twitter list has 47 members. Some are more active than others. Not one is any less intriguing, informative, spiritually guiding than the next.

Seriously, these ladies are amazing. Here’s a bit more context, told in the only way imaginable—their own words.

They met at church.

@Barbera_Loyd Hello Barbera it is me Linda from church service.

@PeggyRoss_ hi I go to church with u

They’re not good at it, but they’re fascinated with The Twitter.

@Barbera_Loyd barb how do I stop being an egg I wanna hatch into a chicken — Betsy (@BetsyReynolds_) February 21, 2014

I really like this internet people are being nice to me. — Linda Thompson (@LindaThompson_) February 21, 2014

Too blessed to be stressed amen

God is my number one can’t wait for church

@HolyKatyPerry hi katy perry I’m very glad you are a holy Christian woman!!!!!!! we listen to you at church sometimes — Betsy (@BetsyReynolds_) February 21, 2014

I am NOT a racist. I love the blacks!!! I always thought Martin Luthor King was hot

@slaythisway When I say NIGGER, I mean friend.

God wants to fuck me.

Sex is fun but being holy is funner!

turn down for church!

And they’re actually ’bout that life in general.

The only d I want is dessert.

Dan has me feeling some type of way.

Lucas Shanks is a writer, editor and creative in New York City. Follow him on Twitter @lucasshanks, even though he’s kind of weird on there.