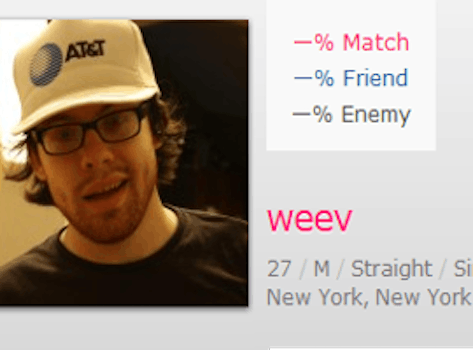 Here's what can we learn about life, love, cyberwarfare, and mild spankings from AT&T hacker weev.

AT&T hacker and Internet troll célèbre Andrew Auernheimer, a.k.a. weev, may be going to jail for three years, but he’ll be leaving us with a heated cultural debate about Internet security, hacktivism, and memories of his full, soft lips.

If you can consider an OKCupid profile part of a lasting legacy, then weev’s is a strong candidate for canonization. With its extreme promotional value and detail, it’s the quintessential mix of self-aggrandizement, drama, and bondage that you’d almost expect every world-famous hacker to showcase.

So what can we learn about life, love, cyberwarfare, and mild spankings from the wisdom weev dispenses to his fellow relationship-seekers?

1) Jewish makeouts are the best.

My lips are soft and full, the result of thousands of years of evolutionary advantage in making out.

Just before that, the “ethnic Jew of Bavarian Origins” facetiously quotes Hitler to describe the lust-ridden effect he has on women.

I create works of great art which challenge civilization, catalyzing both the laughter of millions and angry reactions of law enforcement agencies.

The former president of the “Gay N*gger Association of America” has trolled countless websites and public figures, including falsely reporting 9/11 statistics to CNN, hacking President Obama’s campaign website, and Photoshopping fake pictures of fake looters during Hurricane Sandy. He’s also allegedly demanded ransom from corporate executives after making them think their daughters had been kidnapped and claimed to be responsible for #Amazonfail, a widely reported 2009 incident in which books with gay and erotic content were deleted from Amazon’s search engine and ranking pages. But if, like weev, you “lol at everything,” then where else to celebrate your successful comedy stint but your dating profile?

3) Being an expert at “punishment” can have its advantages.

I have beat five felonies so far. Two more to go.

Apparently his skirmishes with the law–weev was first arrested in 2010 for the AT&T hack, which eventually won him jail time—hasn’t put a damper on his romantic enthusiasm:

I may be best at discilpine [sic] and punishment.

What kind of “punishment,” weev doesn’t specify—but later on he advises girls to contact him “if you like being spanked.”

4) Don’t call it being a workaholic…

…call it “a polymath’s embrace of multidisciplinary success.”

With erratic work hours catalyzed by a polymath’s embrace of multidisciplinary success I am just as likely to be partying on a Tuesday as a Friday.

Translation? “Years spent surviving on caffeine boosters and pulling all-nighters has left me with a fluid understanding of time.”

I write code in about 11 different programming languages, and currently waffle back between Erlang, Rust, Perl and Bash as my most-used…

His profile also goes on to specify that he speaks “English (Fluently), C++ (Poorly), Other (Fluently),” and “LISP (Okay).”  Does this prove that verbal communication is overrated?

6) When in doubt, claim to do everything.

Over the course of his 1000-word OKCupid missive, weev claims to have “founded” the Anti-Security Movement (known as Antisec), to have been “highly influential” in creating the Occupy Wall Street movement, and to “be good at everything.”

I fuel generators on the rooftops of skyscrapers during hurricanes. Sometimes I’m known to drive a forklift. I weld aluminum, sometimes underwater.

In the immortal words of Shania Twain, “Okay. So you’re an underwater-welding forklift-driving storm-chaser. That don’t impress me much.” At least it didn’t impress the federal court system much when it convicted weev of identity fraud and unauthorized computer access.

7) Today, a trailer park—tomorrow, the world.

I was born into a trailer park in Arkansas. I have since traveled the world in Gulfstreams and cabin class. I’ve lived in the presidential suites of five-star hotels, federal prisons, jails both foreign and domestic, mansions and hovels. I’ve partied on a private jet out of Rio and been viciously beaten by the US marshalls [sic] within a two-week timespan. Oh the places you’ll go.

But if weev’s story is a simple rags-to-riches-to-straitjackets tale, then what was he doing living in Fayetteville, Arkansas at the time of his arrest?

The most private thing I’m willing to admit: I have watched more than one episode of My Little Pony.

This is an odd definition of “privacy” coming from a man who’s spent his life hacking into thousands of email and personal account information. Then again, considering the government has allegedly been spying on the kid since he was 15, let’s just let him have his deep dark bronyism.

9) On the upside, you can mainline CNN.

Alas, ladies, this probably doesn’t have the romantic connotations you might expect from a typical OKCupid user. If this guy won’t leave his hotel room, it’s because he’s hacked into their Wi-Fi, not because he’s tied you to the bed. See also:

Lest we be tempted to read too seriously into weev’s efforts at wooing and forget that the troll is still with us, his favorite reading material gives us our due pause. One of his favorite books? Choke, Chuck Palahniuk’s novel about a disaffected 20-something who’s unable to achieve lasting sexual or emotional connection to women. Er.

That might explain why his “Dating Persona” personality quiz shows him to be “The Playboy.”

Three of these titles belong to William Gibson’s famous cyberpunk sci-fi series exploring a dystopic world run by computers. Snow Crash is another sci-fi dystopia by Neal Stephenson in which the Internet has become a massive virtual reality game.

The hero of the story? A hacker.