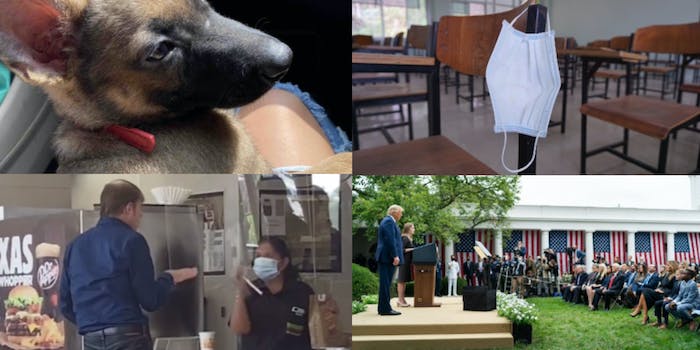 Weekend update: A puppy thrown by its owner, an anti-mask student, and more

A man bragged on Facebook about writing “BLM Button = No Tip” on a receipt. He was fired. Here’s what else caught our attention this weekend:

A racist woman threw her dog at a Black man. When he rescues it from her, she accuses him of ‘stealing’

A seemingly racist woman in California turned her dog into a weapon during an altercation with a Black man. In the filmed altercation, which caught the internet by storm over the weekend, the woman forcefully throws the dog at the man as it lets out repeated yelps. The man then scoops up the dog, who ran to him for refuge after landing on the ground, in an apparent attempt to rescue it from the woman. The woman, however, accuses him of “stealing” it. Read more about the initial incident here.

The man later updated ardent followers of the viral story, letting them know he kept the puppy and that she is “safe” and “happy” now. He has since named her “Movie” and even started an Instagram account for her, where she’s amassed a following of 150,000. A GoFundMe was also set up by the man “for anyone who wants to help” the now-puppy influencer; it surpassed its initial goal of $3,000 within hours. One person online called it a “happy ending to a brutal story.”

Read more about the updates here, and catch up on what else you may have missed below.

At this point the science is settled: Everyone should be wearing a face mask to help reduce the spread of COVID-19. The best option to protect yourself and your family are FDA-registered surgical masks—but where should you buy them? There are a ton of “”medical masks”” being sold in pharmacies, gas stations, and on Amazon, but are they legit? If you get a fake pair of Converse, it’s a bummer. But if you get a surgical mask that doesn’t provide the protection you think it does during a global pandemic? You’ve got a problem. A big one.

Armbrust USA is an American manufacturer of FDA-registered, ASTM Level 2-rated, disposable surgical masks made in Austin, Texas. The millions of masks produced each week in the company’s sterile manufacturing plant are used by hospitals, state governments, and you. Use code DAILYDOT and save 20%.

TEACHING WHILE IN A PANDEMIC

A video of a teacher arguing with a student after she was caught improperly wearing a face mask in class is going viral, and viewers are firmly on the teacher’s side. Viewers are empathizing with the frustration that he and all other teachers face while trying to safely do their job during the pandemic. Since schools started reopening in the fall, at least eight teachers in the U.S. have died from the coronavirus.

President Donald Trump announced that he and first lady Melania Trump tested positive for the coronavirus in the early hours of Oct. 2. Since the announcement, numerous people—from family members to advisers—in the Trump administration have received positive COVID-19 test results. Many of them attended the Rose Garden announcement where Trump officially nominated Amy Coney Barrett to the Supreme Court. The event was held outside, and most people in attendance didn’t wear a mask.

Here is a list of people in the Trump circle who has tested positive for COVID-19 so far.

INTERNET PERSON OF THE WEEKEND

The internet person of the weekend is a woman who stood up for a Burger King worker. An anti-masker seemingly implied the worker was not a U.S. citizen when trying to order food. “It has nothing to do with her citizenship, a**hole,” the woman tells the anti-masker. As the man leaves the restaurant, he appears to have an internal freakout upon noticing he’s being recorded by the woman. People online are now lauding the woman and saying that standing up for workers should be normalized.

Inspired by the Digg’s “Who Was This Week’s ‘One Main Character’ On Twitter?“