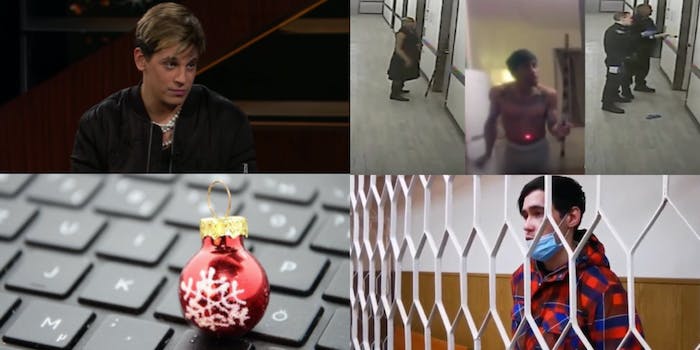 Weekend Update: Milo Yiannopoulos has meltdown on Parler and more

The official cause of death for YouTuber Reeflay’s pregnant girlfriend, Valentina Grigoryeva, was revealed after he allegedly killed her during a live stream. Here’s what else caught our attention this weekend:

Milo Yiannopoulos has meltdown on Parler after SCOTUS decision

The Supreme Court on Friday threw out a Texas lawsuit that aimed to overturn the results of the 2020 presidential election, and some loyalists of President Donald Trump are handling the news better than others.

Conservatives on Reddit are being lauded for handling the unsurprising news “like adults.” “Well that’s that then,” one redditor wrote.

Milo Yiannopoulos, on the other hand, is having a full-blown meltdown on Parler. “I am dedicating the rest of my life to the destruction of the Republican Party,” he vowed on Friday after hearing the news.

He also took aim at the three justices appointed by Trump to the Supreme Court who voted to reject the Texas case. “Trump’s SCOTUS appointments were pointless. We defended a selfish clown for nothing,” the once-staunch supporter of the president wrote.

Screenshots of his posts are being widely shared on Twitter, with many mocking the current “mood” on Parler (other users are calling for a “Texit” or Civil War).

Shopping in malls is definitely an option this Christmas, but not one we would recommend. It’d be a safer bet to stay inside and buy your gifts online. If you’re drawing a blank on what to get those hard-to-shop-for people (and we know you all have at least one in the fam), you might want to consider giving them a gift card instead.

Kawaski Trawick, a gay 32-year-old personal trainer and aspiring professional dancer, was shot and killed in his apartment by a New York Police Department officer in 2019. Footage recently obtained and published by ProPublica shows that Officer Brendan Thompson shot Trawick, despite his more-experienced partner’s insistence not to use force. Thompson’s partner, Officer Herbert Davis, even pushes Thompson’s gun down at one point in the footage.

Given the anticipated spike in coronavirus cases resulting from a Thanksgiving travel boom, now might be a good time to consider a remote holiday party. From slideshow presentations to safe food swaps and party games, here are some virtual holiday party ideas to try.

Batman has gone through numerous reboots and makeovers since his movie debut in 1943. In this YouTube video, we explore the bizarre history of his iconic costume. From spandex tights to kevlar body armor, the Batsuit tells us a lot about Hollywood’s attitude to superheroes. Is Batman a noir detective? A sex symbol? A violent antihero? The Batsuit’s story takes us on some surprising twists and turns, touching on government censorship, ’90s homophobia, and Zack Snyder’s unique attitude to action filmmaking.