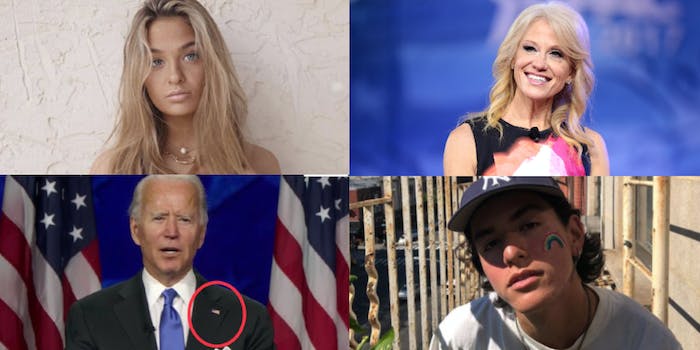 A maskless Karen got kicked off a flight and claimed to be a victim of racism on her way out. She’s white. Here’s what else caught our attention this weekend:

Kellyanne Conway announced in a statement on Sunday night that she will be leaving the White House at the end of August, and George Conway similarly revealed he will be stepping away from the Lincoln Project. The announcements came shortly after their daughter, Claudia Conway, said she was “officially pushing for emancipation” on Twitter.

The 15-year-old said she was “devastated” upon finding out her mom was slated to speak at the upcoming Republican National Convention (RNC). “My mother’s job ruined my life to begin with. heartbreaking that she continues to go down that path after years of watching her children suffer. selfish. it’s all about money and fame, ladies and gentlemen,” she tweeted on Saturday.

Conway has been embroiled in a very public feud with both of her parents after it was discovered in June that she was a Trump-hating leftist on TikTok, where she has amassed more than 600,000 followers. She has bashed her mother for serving in the Trump administration and her father for being too conservative. “As for my dad, politically, we agree on absolutely nothing. We just both happen to have common sense when it comes to our current president. Stop ‘stanning’ him,” Conway also tweeted on Saturday of her father, who co-founded the Lincoln Project.

Read the full report here, and catch up on more weekend news you may have missed below.

Without Judy Blume, many of us would have fumbled our way through our teenage years. Now she can teach you how to find your own voice as a writer.

Conservative pundit John Cardillo launched a conspiracy theory on Saturday alleging that former Vice President Joe Biden secretly pre-recorded his speech at the Democratic National Convention (DNC). But, as is usually the case, the conspiracy is entirely false. Journalists who witnessed the speech began debunking it by tweeting out pictures they took as the former vice president spoke.

Lohanthony Seemingly Denounces Homosexuality in a Video About Finding Jesus

In the video, Lohanthony, whose real name is Anthony Quintal, says he was “decade-long search for gay love that would ultimately end with disappointment … a void, which was later filled by Jesus Christ.” Many saw Lohanthony as a gay icon who helped some fans come to terms with their own sexualities growing up. People are now begging critics to refrain from sending Lohanthony hate and to show him empathy instead.