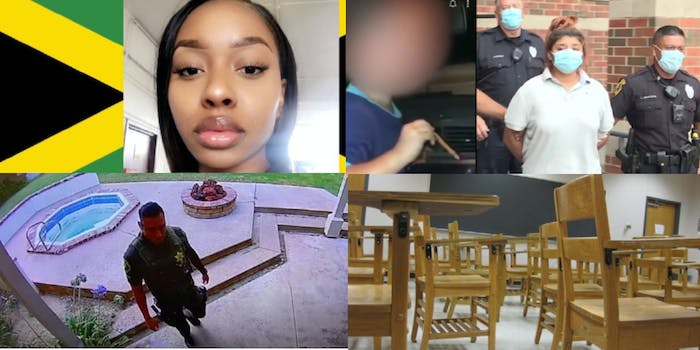 Weekend update: Bad acts caught on camera, a GoFundMe for racists, and more

Deputies pulled over a Lyft driver for a broken tail light. A video shows them beating up the Black passenger. Here’s what else caught our attention this weekend:

There was no shortage of horrific incidents caught on camera this weekend. A teen was arrested after allegedly encouraging her 3-year-old brother to smoke marijuana for a Snapchat video. A deputy in California was caught on camera allegedly burglarizing a dead man’s home. And a CEO had to rehome his 4-month-old puppy, Bici, after being caught by his condo’s security camera abusing the pitbull.

Customers at fast-food restaurants were also caught acting up. A TikTok star filmed himself stealing from a McDonald’s worker, and a “KFC Karen” demanded to be served chicken and mashed potatoes while standing on top of a counter, maskless.

FDA registration is the only way to know for certain the masks you’re wearing are safe and effective. But marketing on non-regulated masks can be misleading. And when it comes to choosing PPE in a global pandemic, that deception can be dangerous. So how do you know the masks you are buying will actually protect you? Armbrust USA has the answer. This American manufacturer of FDA-registered, ASTM Level 2-rated, disposable surgical masks produces millions every week in the company’s sterile manufacturing plant. If you want to be sure you are as protected as you can be, an Armbrust mask is the way to go.

PUT YOUR MONEY WHERE YOUR MOUTH IS

Jordene Phillips, a Black woman living in London, set up a donation page for all the racists telling her to “go back to your country.” Phillips wrote in her GoFundMe description that she will “happily” leave if they fund the expense.

School teachers are beginning to die of COVID-19

At least six teachers have died since early August across the U.S. from the coronavirus, according to the Washington Post. While it’s been difficult to contact trace where each teacher was infected, the deaths have further instilled fear in educators about in-person learning. It’s clear, though: Teachers are dying of COVID-19.