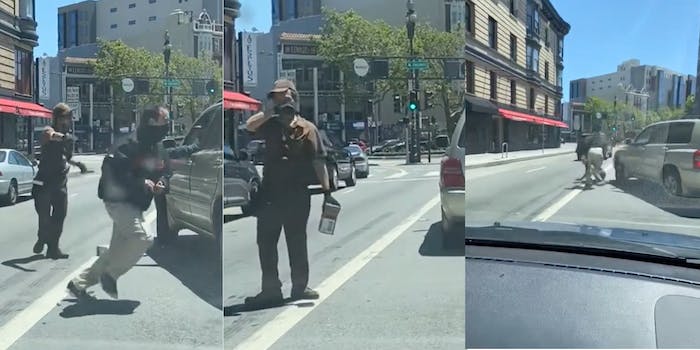 Two videos that went viral over the weekend had surprise endings, to the delight of social media users.

In one, two men can be seen trying to take a package from a UPS driver. Not only were they unsuccessful in getting the package, but one of the men tripped and fell face-first into the pavement while trying to leave the scene.

Meanwhile in Dublin, a young white man was captured getting into a quarrel with two Asian senior citizens after refusing to leave their shop. That video ended with the white man on the ground after getting decked in the face by one of the senior citizens. The clip was apparently satisfying to watch, with one viewer proclaiming they “can’t stop watching the end.”

After everything is said and done, how do you know what services don’t just talk the talk but walk the walk? For starters, you’ll need to know what you’re looking for. Do you need email support? Want something that’s WordPress compatible? How about developer-friendly? Or are you pinching pennies for a package that’s as cheap as it gets?

An Uber Eats driver posted an emotional video to TikTok where he revealed how little a customer had tipped after driving an hour to get their food. The now-viral video seemed to resonate with several commenters on TikTok. “Say it with me: PEOPLE DESERVE LIVABLE WAGES & DON’T ORDER IF YOU CAN’T TIP,” one person wrote.

A viral TikTok video shows that at least one Starbucks location is using store-bought lemonade and syrups amid supply problems. TikTok user @torivile, who appears to be a Starbucks employee, posted the video. It shows multiple shopping bags filled with Minute Maid lemonade and Torani syrup. Starbucks has been facing a shortage of fan-favorite drinks, like the Very Berry Hibiscus Refresher, as the coffee chain experiences nationwide supply issues. Luckily for many concerned customers, Starbucks has no plans to discontinue the popular drinks. The company is simply waiting for supplies.