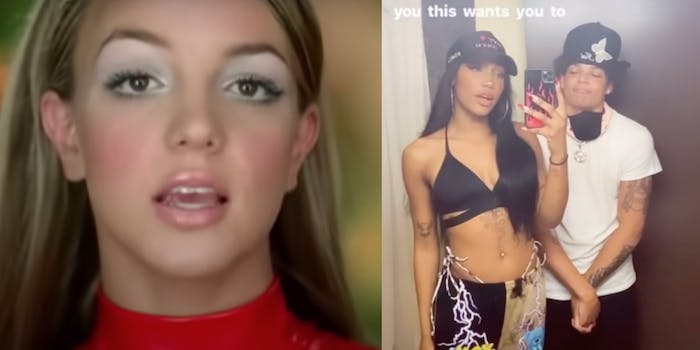 Weekend update: Britney Spears takes over the ‘It’s Gonna Be May’ meme and more

An Amazon worker described as a “whistleblower” by WFSB exclusively told the outlet that he found a noose at a jobsite. Five additional ropes—that could be interpreted as nooses—were also reportedly found at the location. While the worker says that managers reached out to him regarding the incident and that police are now constantly patrolling the jobsite, the local NAACP is demanding both “a full investigation into the matter leading to criminal prosecution” and “every available measure be put in place to ensure the safety of all workers at the site.” Amazon confirmed with the Daily Dot that a criminal investigation is underway.

Meanwhile, a Black Amazon worker in California was subjected to a woman’s racist verbal attack as the woman’s boyfriend allegedly blocked the delivery vehicle so that he couldn’t leave. The woman has reportedly since been charged with battery, false imprisonment, and several hate crimes. The driver is thankful the incident was recorded by a bystander and revealed that, presumably due to his skin color, he was concerned he was going to be the one to end up in handcuffs once the police arrived.“What constantly was running through my mind was, you know, it could be me in handcuffs instead of her,” he told KRON4. “If there wasn’t a video, it wasn’t being recorded, she probably could’ve gotten away with saying this.”

Make your life easier with a mask subscription for the kids

Keeping a mask on your kids’ faces is about as easy as teaching a cat to fetch. That said, at least if you stock disposable masks you don’t have to lose it when their cloth masks vanish for the 57th time. Armbrust’s child-sized mask subscription will keep your household stocked and save you 30% off the cost at the same time. And with blue, pink, and orange to choose from, you can be sure they’ll never be bored with this now-crucial daily accessory.

‘Heyo, the person who sent you this wants you to know’ about this TikTok meme

If you’re an avid TikTok user, you’ve probably seen countless videos parodying TikTok influencer Bria (aka @briaalanaa), who’s best known for her signature “heyo, the person who sent you this wants you to know” introduction and “no cap, facts, no printer, copy, no paste” sign off. One of her videos has become one of the biggest memes on the platform right now thanks to Bria’s baby-voiced greeting and her friend’s nearly incomprehensible speech.

Around this time each year, social media users typically flock to the internet to share an image or GIF of Justin Timberlake from his *NSYNC days, captioned “It’s Gonna Be May.” The meme is a riff off of the band’s popular 2000 song, “It’s Gonna be Me,” in which Timberlake sings the word “me,” pronouncing it as “May.” Several fans of Britney Spears are now saying “Bye, Bye, Bye” to his ritual meme in light of the New York Times’ Framing Britney Spears documentary.