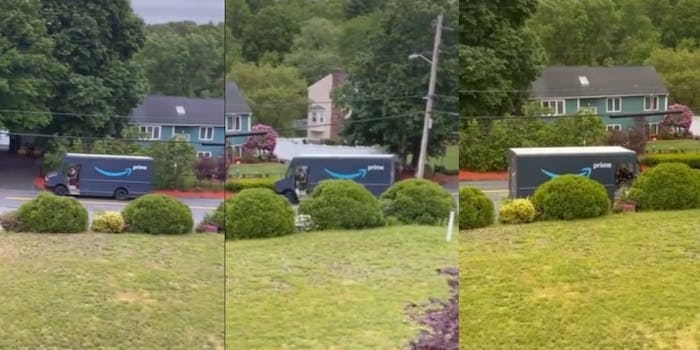 ‘Something is broken in America’: People feel sorry for Amazon driver caught screaming from truck

Two delivery drivers went viral on TikTok over the weekend for wildly different reasons. One of the TikTok videos in question features an Amazon driver screaming at the top of his lungs as he makes his way down the street in the delivery truck. His apparent distress while on the clock has sympathetic viewers calling for higher wages and better working conditions for all Amazon employees.

The other TikTok video features a USPS driver tuning out a “Karen” by turning up the music in the delivery truck he is sitting in as he tries to enjoy his lunch break uninterrupted. The Karen video, however, surprisingly ends on a happy note as the two later hash things out with a hug.

As contributor Nahila Bonfiglio writes, “If only all Karen confrontations had such happy endings.”

Never stress about your kids losing their masks again

Keeping a mask on your kids’ faces is about as easy as teaching a cat to fetch. That said, at least if you stock disposable masks you don’t have to lose it when their cloth masks vanish for the 57th time.

Armbrust’s child-sized mask subscription will keep your household stocked and save you 30% off the cost at the same time. And with blue, pink, and orange to choose from, you can be sure they’ll never be bored with this now-crucial daily accessory.

A video of two angry McDonald’s customers bullying restaurant staff sparked a debate on wages and the shortage of workers currently impacting the industry. The video starts with two men, who are upset with a McDonald’s employee because they allege she was rude and that the sausage was missing from their McGriddle. They hurl insults at her as she tells them to “have a nice day.” The treatment of the fast-food workers in the video prompted compassionate responses from folks online. As with many incidents that take place in fast-food restaurants, the topic of wages came up.

The teenage niece of dancer Julianne Hough claimed her aunt told her that she “slept with” Leonardo DiCaprio—and that he was bad in the sack. “My aunt has slept with Leonardo DiCaprio,” the teen, who is reportedly the daughter of Hough’s older sister Sharee Hough Selman, said in a since-deleted TikTok, according to Page Six. “Apparently, he’s not good in bed, though.”