Are geeks the new bullies?

It's time for nerds to make a stand.

Another week, another misogynistic attack within our community. As the geek community becomes more and more mainstream, some of the dark elements with our niche are floating to the top, like scum on a pond. And it is up to us to deal with it, not merely shrug our shoulders and pass the buck. To catch up those who missed it, Jessica Nigri went on Twitch to play video games. And so, out came the trolls. 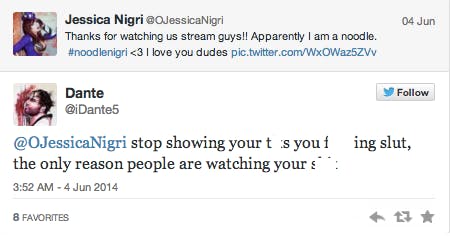 And as usual, it is intrinsically linked to misogyny. 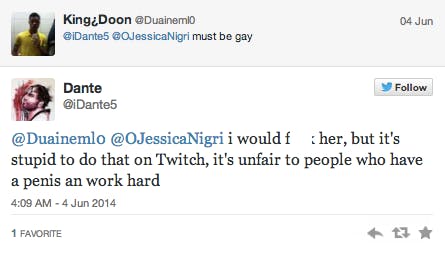 It is incredibly saddening but this kind of thing has become so commonplace that it no longer surprising and barely offends anymore. These attacks on women in the geek world happen daily and are all pervasive. When FoodAndCosplay created the #NotACosplayer campaign, it was inundated with replies about how certain things weren’t cosplay, how some people were ruining cosplay and the like.

And the hashtag revealed even more:

A beautiful and sad photo series worth checking out. “@FoodAndCosplay: #I‘m to fat to be a cosplayer” #NotACosplayer pic.twitter.com/1wsSA2yDKV“

We took the time to speak to a few cosplayers about their experiences, and some incredibly saddening stories emerged.

I had a good friend recommend I bring back my Misty cosplay (I cosplayed her a while back) so I did… As soon as I posted it on a Cosplay group on Facebook. I got bombarded with comments such as ‘Misty’s boobs are not that big’ ‘The way you’re posing look stupid’ ‘Your boobs like weird’ ‘That’s not cute at all’. Truth be told it broke my heart and I took the post down.

The first was my first con cosplaying earlier this year. I was with Maria (my cosplay partner) and we were dressed as Harley Quinn and Poison Ivy. So when a group of 5 guys came up to us I didn’t really think much of it. They all asked and were really polite, first few guys had their pictures taken and then the last guy walked over. He was also in cosplay, but I couldn’t place who he was. He had big shoulder pads on with red and white stripes on one side and blue and silver stars on the other. In my haze of the day and the excitement of it all I said, ‘Oh hey, you’re Captain America—awesome.’ He laughed in my face, turned round to his friends, pointed his thumb at me and said, ‘She thinks I’m Captain America.’ He posed for his picture and walked off with his friends still chuckling. He just mocked me and walked off. I felt awful. It takes a lot to rock my confidence but that really did it. I felt like a sham. One of those ‘fake geek girls’ who don’t know enough about comics etc. Later I was able to place the character, he was The Comedian from Watchmen. A comic that I had only recently (pre-con) devoured in the space if a few days and loved. Didn’t stop me feeling like a complete chump at the time and I still look back now and cringe at my awful ignorance. I was so angry after. I just kept thinking, ‘If that had been a 14-year-old girl, who had saved up her pocket money to make her outfit, she would have been devastated.’

People need to realise behind the picture is a person who put time, effort and money into this cosplay. Even though my cosplay was accurate, my body shape made me into a ‘slut’ sexualising cosplay when this is not the case. I can see why most people are intimidated to join the con community and start cosplaying.

If you’ll allow me to be frank for a moment, what the bloody hell is wrong with people?

Look, I get it. I’m now 31 and I’ve been a geek almost all my life. I’ve been going to conventions since I was 14 and they were 30 heavy-set men crowding round a desk full of floppy disks. As a teenager, the geek culture was a place of safety for me, a place to feel at home. I was never sporty, never a cool kid with all the toys. All I had was smarts and a love of sci-fi. And that worked in the fandoms—it didn’t matter what I looked like, it didn’t matter what I did, all that mattered was what I knew. That was comforting, that the arbitrary rules that held sway over the rest of the world did not apply here.

And then it all changed.

Nerd Culture became mainstream culture. The public face of the scene was changing. There was a massive influx of people and money into this once dark corner of my world, and with this influx came many many changes. One of the biggest was that of demographic. Whilst the men I grew up with were there, there were also many new faces—faces of color, female faces, young faces. And as these people joined us, it allowed their peers, who had long hung in the background of geekdom, to rise with them. In time, the culture changed to include their views, and change can be scary. Suddenly those rules that we held sway against started to affect our world, started to have weight. What you looked like mattered, you were judged on it. How cool you were mattered, how much you knew mattered less.

But you know what? We are the ones doing the judging—not them.

We are the one’s getting protective, we are the one’s enforcing some idiotic idea of how things should be enjoyed or consumed. You don’t see the folks who came to Marvel via the MCU judge those who read for 20 years, you don’t seem folks at their first con sneer at those vets who have been around for years.

It is us, the old guard, drawing imaginary lines in the sand and saying those over there, they aren’t real fans.

And I for one will not stand for it.

This is my community, these are the people I love and the places I am whole. My truest friends have been forged in our love of Picard, of Reynolds, of Briene. I will fight for it to remain a place of safety, of openness and welcome. We will take in all. Those who just fancy Chris Evans and those who have read Cap since Issue 1, those who waited 7 years for Dance With Dragons and those who have never seen it but love the Daenerys cosplay they see around. There are no gatekeepers to this community, no test to pass or requirements to fulfil. Come as you are, let me show you what I love, show me what you love. This is my home and there will always be a place for you.

And so to the trolls I say this: grow up or get the fuck off my lawn.

Rob M is a geek-photographer based in Shropshire, UK. When he isn’t taking photos for Kaiju Industries, he’s watching terrible 80’s VHS movies or writing for Need To Consume. His favourite Nic Cage film is “Con-Air.” This article was originally featured on Need to Consume and reposted with permission.