People are disgusted by the very idea of watermelon guacamole

On Wednesday, something so awfully disgusting happened that it shook a nation to its core: Somebody suggested serving guacamole and watermelon together, using the larger fruit as a bowl.

If you need a moment to process that, I fully understand. Something so abhorrent warrants pause. ABC7 News posted the story, originally featured on “Entertainment, News, and Lifestyle for Moms” website Babble.

The recipe for disaster was originally published two months ago and touted as the “perfect summer snack,” but ABC7 presumably felt it needed to celebrate National Watermelon Day with something that would turn heads. And it most definitely did: People turned their heads and wretched. As in, they turned to Twitter to share their feelings of extreme revulsion.

Guac and watermelon are two of my favorite substances on earth. Separately.

Exactly. Keep watermelon the HELL away from my guac!!!

NOW YOU'RE TRYING TO RUIN GUAC??? WHAT IS THE MATTER WITH YOU PEOPLE???? STOP THIS WATERMELON TYRANNY! https://t.co/cbREHAHmwW

Seriously who hurt someone enough they could ruin both watermelon AND guac?
That's like hitting a puppy w/ a kitten.

Wondering if this was ever a thing, I did some research. Google had some results, but nothing that makes me trust this devious idea. Chef Rick Bayless has a recipe for watermelon-ginger guacamole, which is all other kinds of fucked up. White people just love ruining food.

I also texted my Mexican mother. She had this to say: 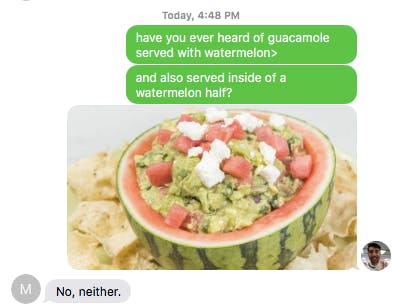 Just further evidence that watermelon guacamole is not a thing and should be ridiculed at all opportunities.

Last year, the sanctity of guacamole faced similar violence when the New York Times suggested putting peas in the dip. Even President Obama chimed on this very hot issue. People of course remembered this moment in guacamole history and decreed sentiments similar to those that swirled around Peagate.

Add green peas to your guacamole. Trust us. http://t.co/7imMY9c2ph pic.twitter.com/oeOMt2qgmh

things they want you to put in guac:
peas
watermelon
potatoes
blood of your enemies
maybe some blueberries
two sticks of dynamite

Listen, don’t fuck with guacamole. Because people will come for you.