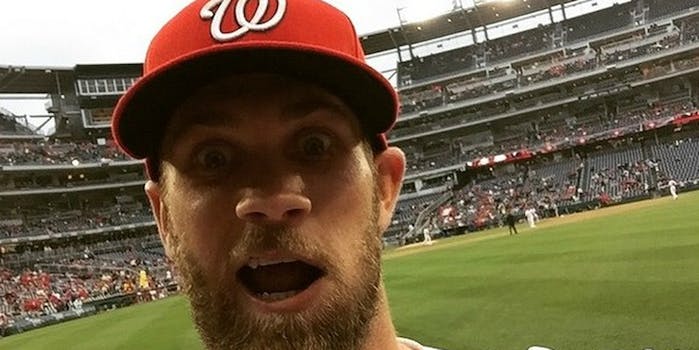 Throw Bryce Harper your phone, and you never know what you're going to get.

Bryce Harper, one of baseball’s youngest superstars, currently leads the league in home runs (18), runs (43), walks (45), and on-base percentage (.718). The Washington Nationals outfielder is 22 years old and he’s got quite a future in the game. But most important, for our purposes, is the fact that he has a sense of humor—even when fans think it’s OK to bother him while he’s working.

On Tuesday, when someone asked for a selfie just before a game was about to start, Harper obliged with a good idea and a goofy face. Here his masterpiece.

“It was pretty good,” Harper told the Associated Press after seeing his selfie for the first time following the game. “Just messing around a little bit with the fans. Enjoying it with them a little bit. It’s always fun.”

As fans were taking pictures of Harper from the stands in between games of a double-header, he saw Nationals fan Jamie Roach and implored her to throw him her phone from about 15 feet above him. He caught the device and then took the photo you see above. Roach told the AP that she attends about 40 Nationals games every year and that she was obviously pleased with Harper’s gesture.

“I was so excited. I’ve never gotten a ball from him, but now I’ve got this picture,” Roach told the AP. “It was very awesome. The feeling like a kid in a candy store.”

As of Tuesday, Harper leads all National League players in All-Star balloting with more than 2.3 million votes. Now he can add to that total one excellent self-portrait that all of us are lucky enough to witness.