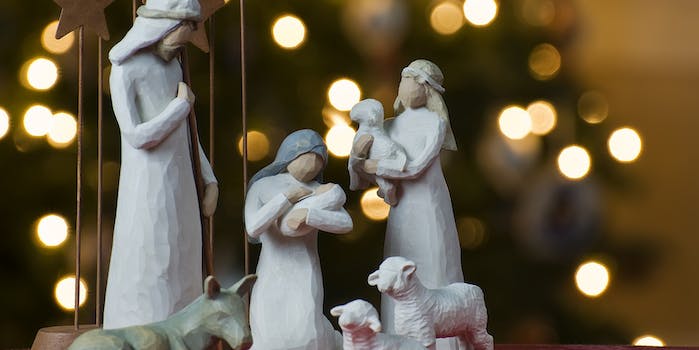 The nativity scene is a Christmas staple, and it's increasingly become a battleground over the holidays.

The nativity, whether on a church lawn or brazenly displayed at City Hall, is a fixture of American Christmases—as is, of course, controversy. While arguments over nativity scenes trend toward questions of the separation between church and state, nativity scenes gone wrong run the span from bizarre, to funny, to actively offensive. It’s not a War on Christmas, per se, but a war over Christmas, one that deeply speaks to definitions of a changing America.

If Christmas is a time for fighting—whether its for that last beautiful evergreen tree or with your family after you’ve had too much eggnog—there seems to be nothing more popular to fight about than the most famous Christmas staple of all.

There was no good reason for the Ohio homeowner who created this zombie nativity scene to be ordered to take down his handiwork. For one thing, his neighbors have known for the last fifteen years he’s displayed it that it’s intended as a harmless cheeky parody; however, its harmlessness is beside the point, considering that our founding fathers not only intended to protect iconoclasm, but occasionally indulged in it (see: Thomas Jefferson’s rewriting of the New Testament). The town officials in Deer Park need to lighten up and read their Constitution.

But why zombies in particular? The walking dead have become increasingly in vogue in recent years, and according to researcher Saura Lauro, there’s a reason for that. Lauro told Mic, “We are more interested in the zombie at times when as a culture we feel disempowered.” As Mic’s Hannah Klapp-Kote further explains, “The first popular zombie movie was in 1968, a tumultuous year in American politics with the Vietnam War, the unrest at the Democratic Convention, and the general malaise of the 1960s.”

Whereas the past decade has been marked by the proliferation of global conflict and concerns over the effects of climate change and overconsumption, the zombie might hold a particular power after a year marked by racial unrest. Either way, if zombies can take over our televisions and multiplexes, why wouldn’t they come for Christmas next?

It’s interesting how the zombie nativity has stirred up outrage, but a transparent corporate promotion from Nintendo did not. In using contemporary video game characters to stand in for the nativity, Nintendo’s PR ploy is another sign of the commercialization of Christmas, a trend stretching all the way back to the Three Kings. According to a recent Pew poll, 52 percent of Americans think that the holidays are too commercialized. As Chris Rock put it in a recent SNL monologue, “Jesus kept a low profile and we turned his birthday to the most materialistic day of the year. Matter of fact, we have the Jesus birthday season. It’s a whole season of materialism.”

But in this case, commercialism isn’t all bad, since the Nintendo nativity is quite delightful. To be fair, I’m not sure Sackboy should be playing the baby Jesus in Gamestation’s Nintendo World nativity scene. As the most recognizable video game character in the world, it’s hard to argue that Mario isn’t the proper savior of the Nintendo universe (and before you ask, Baby Mario is a thing). This is a nitpick, though; the bottom line is that there are plenty of people who worship video games with far more reverence than they do the Roman holiday used as a proxy for the birth of their Lord and Savior.

Like the aforementioned Nintendo World nativity scene, I’m surprised (and happy) this one hasn’t attracted controversy. I’m also astounded that this picture hasn’t broken the Internet, since what we have here, in a single tableau, are some of the greatest fixtures of American pop culture: William Riker and Deanna Troi from Star Trek: The Next Generation, a trio of Darth Vaders as the wise men, and a smattering of random onlookers ranging from Bill S. Preston and Theodore Logan from the titular “Bill & Ted movie series to the Tyrannosaurus rex from Jurassic Park.

Like the Nintendo scene before it, this scene blends the traditional and the modern, using the iconography of geek culture to put the scene into our own symbolic framework. While this remixing is a hallmark of fandom, it’s also an important part of how we understand the world, whether its Stephen Colbert satirizing the GOP with Lord of the Rings metaphors or teens attempting to unpack Ferguson by drawing parallels to The Hunger Games.

In 2012, a website called Tampon Crafts launched their own tampon nativity scene; as the website makes everything from tampon blowguns to tampon earrings and anything else you might want to imagine,  the potential for this particular arts and crafts product is limitless. Unfortunately, they had to take down the tampon nativity scene because of death threats, while the zombie nativity scene got a simple cease and desist order. What gives?

The difference between the two reactions has less to do with the level of offense than our extreme uncomfortableness with the finer details of female sexuality, especially when it comes to menstruation. According to Think Progress’ Tara Culp-Ressler, this is because “society’s conceptions about what it means to remain ‘pure’ have an outsized impact on women. Culp-Ressler writes, “While men are expected and encouraged to constantly seek out sex, women are shamed for dressing or acting in a way that’s perceived to be promiscuous.”

If she’s right that these messages “begin at a very young age,” it’s important to remember that a holiday about virgin birth need not be about purity. Sure, the mythic Mary is often deified as a saint she was chaste, but would she be any less important if she weren’t?

There’s nothing necessarily wrong with celebrating secular rationalism as well as Judeo-Christian religiosity every December. My objection to this atheist nativity scene is not with the idea itself, but rather with the condescending message of its creators:

At this season of the Winter Solstice, may reason prevail. There are no gods, no devils, no angels, no heaven or hell. There is only our natural world. Religion is but myth and superstition that hardens hearts and enslaves minds.

That’s the official statement of Anne Nicol Gaylor, co-president emerita of the Freedom from Religion Foundation, which is responsible for the project. Her attitude is particularly unfortunate because there is a healthier way for atheists to feel their voices are being heard on Christmas. When a Santa Monica atheist went to court two years ago to defend his right to display an atheist nativity scene in a park, Charles Haynes of the First Amendment Center and the Newseum’s Religious Freedom Education Project pointed out that “the tactic of many in the atheist community has been, if you can’t beat them, join them. If these church groups insist that these public spaces are going to be dominated by a Christian message, we’ll just get in the game—and that changes everything.”

The Freedom from Religion Foundation had a better approach last year when protesting the placement of a nativity scene at the Florida State Capitol. They responded with a banner that depicted Thomas Jefferson, James Madison, Benjamin Franklin, and the Statue of Liberty adoring an infant Bill of Rights, with the message: “Let us also honor the birth of our Bill of Rights, which reminds us there can be no freedom of religion without having freedom FROM religion in government.”

In short, you can be a proud atheist on Christmas without being mean-spirited about it.

It’s chic to criticize Israel these days. This doesn’t mean that Israel isn’t guilty of human rights violations—far from it—but this nativity scene criticizing the creation of a separatist wall in Jerusalem reeks of bigotry. Setting aside the details of the Arab-Israeli conflict for a moment, it’s also important to note that Christmas has a long history of being used as a focal point for anti-Semitism and even outright persecution of Jews. As recently as last year, there was controversy over a Romanian Christmas song that became a hit precisely because it glorified the Holocaust and called for Jews to be burned over Israel.

Criticisms of Israel may be valid, but unless you think it’s okay to foster attitudes that discriminate against Jews, while making the point that it’s wrong to persecute Muslims, you should avoid using a nativity scene as your vehicle for expressing those opinions. If Christmas is a time too often used to drive us apart and perpetuate culture wars, maybe we should think instead about how to use the nativity scene to help bring us together.