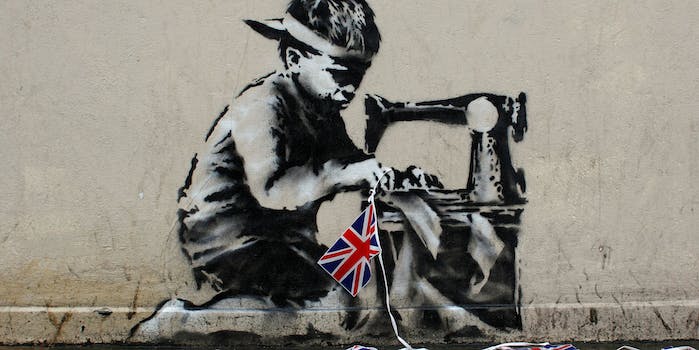 This does not compute.

Banksy, the favorite socially-conscious graffiti artist of 15-year old redditors everywhere, does not hold a copyright to his work. That’s the unfortunate reality of working anonymously on street corners. His style is one of the most recognizable in the world, but anyone can reproduce his murals on shirts, mugs, hoodies, prints, and everything else offered at all your favorite CafePress stores. I guess you could consider that a micro-commentary on consumerist culture—if you were being particularly annoying.

But who cares, right? People reappropriate sovereign art all the time. I can’t walk 10 minutes without seeing a knockoff Calvin pissing on all sorts of political minutia. It’d only be really funny if a super out-of-touch corporation got their hands on the product and OH GOD HERE WE GO.

So, Walmart is selling Banksy prints. Not one of those nice, pretty, abstract Banksy prints, either. We’re talking a straight-up DESTROY CAPITALISM joint. Also, in Banky’s usual, irritatingly straightforward symbolism, it’s clear that this piece parodies the marketability of chic socialist values.

There are three possibilities here. One, Walmart markets their wares through algorithmic estimation, and a sellable, royalty-free painting wasn’t going to slip through their bottom line. But considering this thing is literally titled “Banksy Destroy Capitalism Canvas” I’m not so sure. The more likely scenario is that they just don’t fucking care, and there’s a board room of Walmart executives patting each other on the back right now. Maybe they should start selling Bernie bumper stickers too.

There’s also the chance that Walmart is crying out for help. Maybe the corporation is leaning toward Banky’s satire to try and coerce a generation into tangible action instead of dumb mantle pieces. I’m gonna go with that, mostly because the idea of a guilty Walmart makes me laugh.