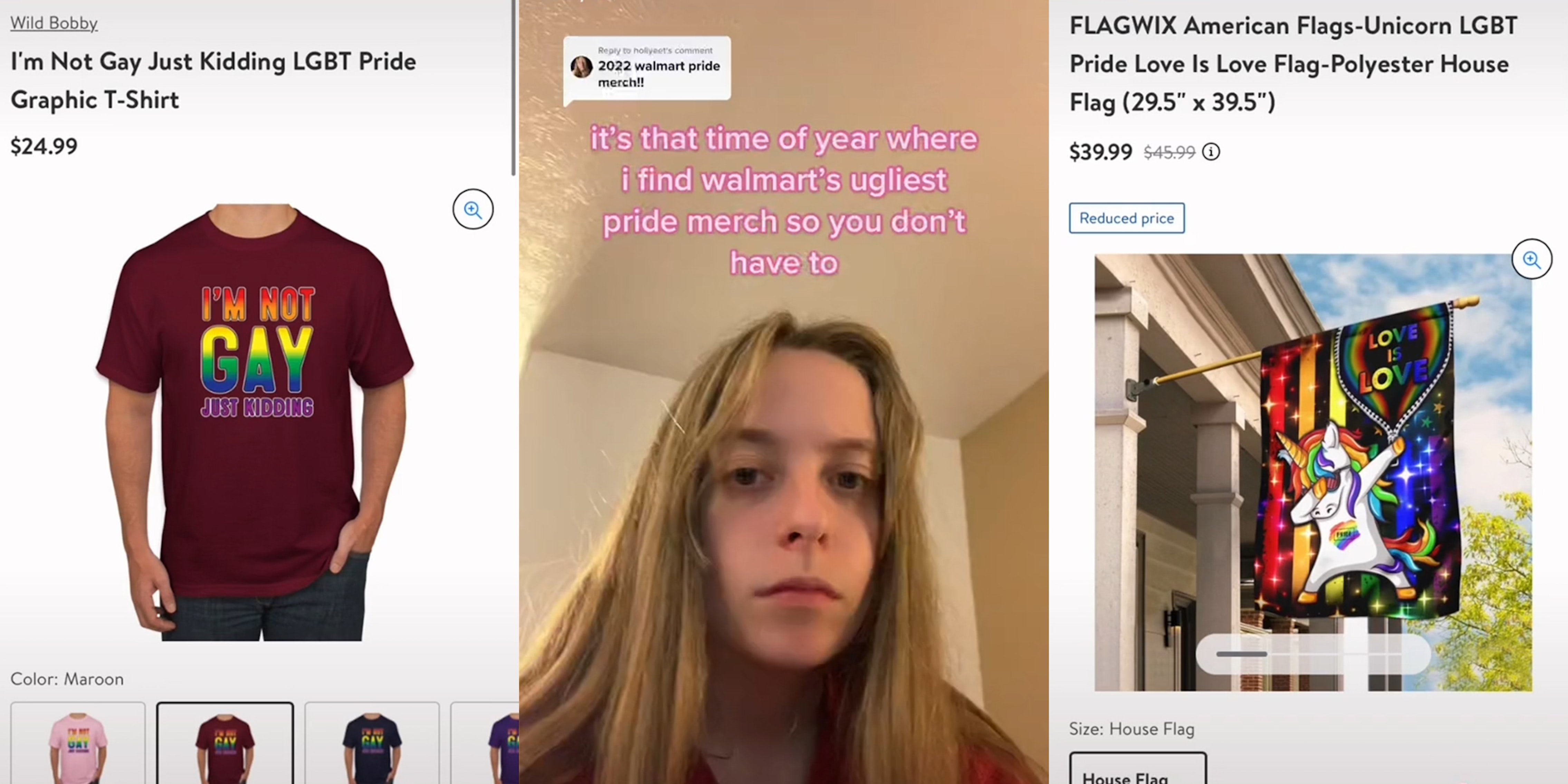 ‘It kind of reads like a threat from a homophobic bully’: Walmart’s Pride Month merch mocked

Pride Month is almost upon us, and you know what that means. It’s time for corporations to sell Pride products that either feel like a cynical cash-grab, or are just plain cringe. Over on TikTok, Walmart is already being mocked for this very reason.

Meanwhile, other TikTokers are chiming in with their own Walmart Pride merch reviews. “I like this one because it kind of reads like a threat from a homophobic bully,” remarked one TikToker, describing a shirt with the slogan, “Come out, come out, wherever you are.”

@abbynissmusic A show and tell of the finest Pride merch on offer at our favorite LGBTQ-affirming corporation, Walmart. #lgbtq #queer #wlw #pride ♬ Not A Love Song – Uh Huh Her

“Walmart is also homophobic because this is the only lesbian item that they have,” joked TikToker @bellava47, pointing out a tank top featuring the dubious pun “Lez is more.”

And Walmart isn’t the only store attracting this kind of mockery. Target’s Pride merch is also earning satirical reviews.

“I’m obsessed with this ‘Gender is a social construct shirt,'” TikToker @dinonuggets.jpg says in deadpan tones. “Followed immediately by the binary selection of women and men’s clothing when I search for it on their website. The execution here is flawless, five out of five.”

“Pride is a protest, and, you, too, can buy into it from this major corporation,” @dinonuggets.jpg adds at the end of the TikTok, highlighting the deeper issue behind all these Pride products.

It’s easy to make fun of tacky shirts, but with companies like Target and Walmart, the real problems are more political. Most obviously: Who is profiting from this merch?

Over on Walmart’s Pride page, the store promotes three products with documented links to LGBTQ+ charities: Skittles, bubly water, and a Pride Month cereal from Kellogg’s. There’s also a collection of Queer Eye furniture where an unspecified percentage of proceeds go to a shelter charity for LGBTQ+ youth. Meanwhile, the rest of Walmart’s Pride products seemingly just create regular profits for Walmart.

Target goes a slightly different route, spotlighting a diverse group of queer and trans designers who are collaborating with the company, including apparel aimed at gender-nonconforming customers.

The big question here is how these Pride efforts measure up to the companies’ behavior the rest of the year round. Similar to the way Disney promotes itself as an inclusive brand while supporting homophobic legislation, this kind of corporate Pride effort can often seem like a PR campaign to launder a corporation’s image. According to Open Secrets, Target and Walmart have donated (via affiliates) millions of dollars to both Republican and Democrat candidates and organizations, with Walmart facing criticism for supporting Donald Trump and anti-abortion groups.

The Daily Dot has reached out to Target and Walmart for comment.