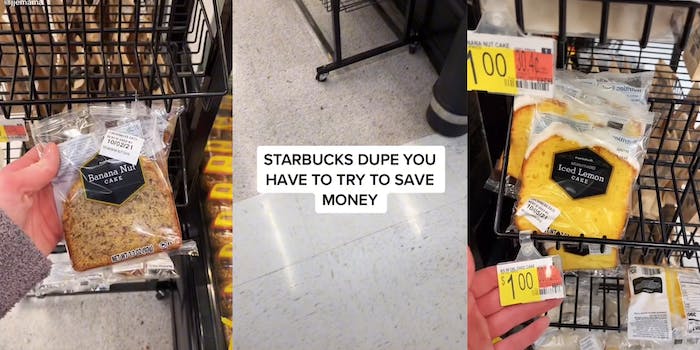 ‘This is the same bread sold at Starbucks’: Former Starbucks worker shares $1 ‘dupe’ from Walmart in viral TikTok

"If you don't like it that's okay! You can go to Starbucks and get the $4 deal.

An alleged former Starbucks worker’s viral video rebroadcasted that the $1 Iced Lemon Loaf Slices from Walmart are a dupe of the Starbucks Lemon Loaf.

While another TikToker went viral back in July for claiming that the Walmart loaf tastes like the Starbucks loaf, now it seems Starbucks lovers on the platform are re-discovering the apparent dupe.

TikToker @jjemama’s 13-second video, which amassed over 1.1 million views and 51,300 likes since being posted last week, basically lets people know that they can enjoy a slice of lemon cake similar to Starbucks’ lemon loaf slices for just $1.

“I worked at Starbucks for four years and I can attest that this is the same bread sold at Starbucks and it’s only a dollar at Walmart,” she says in the video.

The former Starbucks employee goes on to clarify in the comments section: “Obviously this is MY OPINION on a DUPE and I stand by it. Also if you don’t like it that’s okay! You can go to Starbucks and get the $4 deal.”

Some of the 704 commenters debated if the Walmart bread really was the same brand as the one Starbucks uses.

“I worked at Starbucks and Walmart and it’s not the same bread… If you ask for the nutrition facts at Starbucks you’ll see that it’s a cleaner version,” says @mizzfeisty89.

“It’s definitely NOT the same. Don’t say this when you have no idea what you’re talking about,” says @lisarosecastagna.

However, other commenters came to the creator’s defense, noting that she is just trying to give them a price hack.

“To be fair she did say dupe,” says @carmslopez.

“YESS I’ve been saying this for years,” says @jose.lpz.

A Starbucks spokesperson told the Daily Dot in July that the Walmart lemon loaf and Starbucks lemon loaf are not the same. “Starbucks recipes are exclusive to the company, using high-quality ingredients and we continue to develop our portfolio of beverage and food items to meet customer needs. Starbucks Iced Lemon Loaf is a citrusy, buttery, moist lemon pound cake topped with a sweet icing,” the spokesperson said at the time.