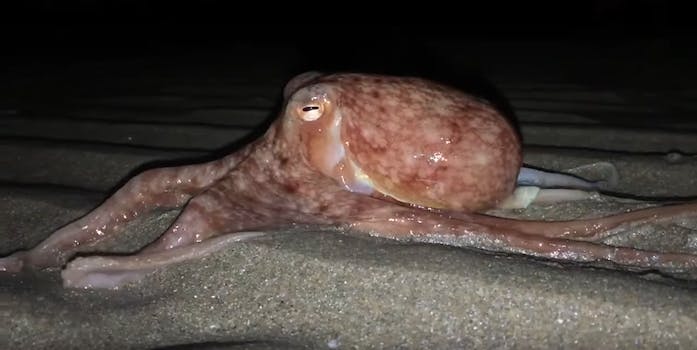 Octopuses are terrifying enough when the stay in the water. Now they're invading our territory.

A small army of tiny octopuses is invading the Welsh coast in the United Kingdom. (For you grammar nerds that’s the correct plural. Octopi, while commonly used, is incorrect.)

Scientist are unsure why more than 20 curled octopuses have been seen crawling out of the sea and onto the beach on multiple nights.

Brett Jones, owner of SeaMôr Dolphin Watching Boat Trips, first spotted them on Friday at around 10pm when returning from a trip in New Quay.

“They were coming out of the water and crawling up the beach. I’ve lived here my whole lifetime and have never seen anything like it,” he told the Telegraph. “We don’t quite know what’s causing it.”

The small cephalopods, which usually live about 100 meters deep in the ocean, have now been spotted on three consecutive nights. Although octopuses coming briefly onto land isn’t completely unheard of (who can forget the terrifying video of one jumping out of the water and dragging a crab down to its watery grave), James Wright, curator at the National Marine Aquarium in Plymouth, England, says for such a large number to be spotted in the same place on multiple nights is a sign that something is amiss, and called the occurrence “quite odd.”

“As the areas where they are exhibiting this odd behaviour coincides with the two areas hit by the two recent low pressures depressions and associated storms of Ophelia and Brian, it could be supposed that these have affected them,” he hypothesized: “It could simply be injuries sustained by the rough weather itself or there could be a sensitivity to a change in atmospheric pressure.”

Dr. Steve Simpson, a lecturer in marine biology at the University of Bristol, agreed that behavior was “extremely odd.”

“They are fairly vulnerable on land and it’s hard to imagine they have found a new food source,” he said. “They may be aggregating to reproduce but they do tend to be territorial and solitary.”

Final conclusion: Scientists don’t know what the hell is going on. Until they do, it might be wise to exercise caution next time you go to the beach.

Correction: The original headline of this article misidentified the location of Wales. It is a country in the United Kingdom.