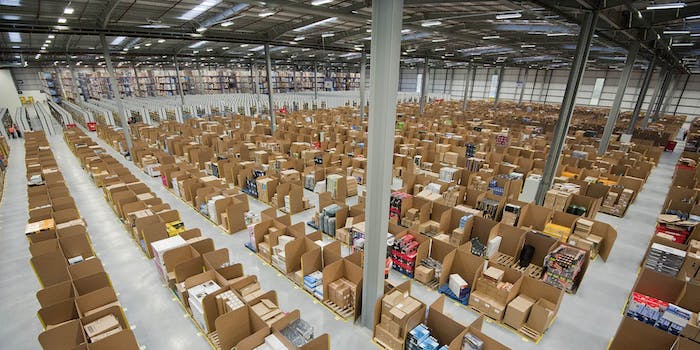 How Amazon and Target get away with wage exploitation

Activists target Wal-Mart for its unfair labor practices. But what about Amazon?

The one and only purchase I’ve made at my hometown’s newer, bigger Wal-Mart Supercenter was a tube of “all-natural” Jimmy Dean’s breakfast sausage. It cost about $1.98. I remember because I felt guilty, and I still do, thanks to the recent media portrayals painting Wal-Mart as the food-stamp retailer. These reports—one of which estimates 15 percent of the retailer’s employees in Ohio rely on food stamps to keep food on the table—have surged as workers organize to improve pay and working conditions (if not actually unionize).

Inundated with this (necessary) coverage, we may miss the point.

I fear many progressive consumers feel vindicated in their long-held belief that America’s largest employer is really an oversized self-destruct button for America’s middle class, painted beige and then camouflaged with an inconsistent use of hyphens and oddly placed yellow asterisks. To celebrate their righteousness, they go buy something at Target or on Amazon.

But Target and Amazon put profits and expansion over their employees, just like their hated corporate cousin. Cute shower curtains, trendy lamps and buying with “one-click” comes at a cost for their workers, too. Avoiding Wal-Mart doesn’t let you off the hook—as a consumer or a citizen.

Several years ago, Hamilton Nolan at Gawker penned a series on working conditions at Target, asking current and former Target employees for the inside scoop on the company. Workers complained of rigid controls on overtime, ever-changing schedules and pressure to work off the clock. Pay started just over minimum wage and raises topped out at 20 cents per year. And according to one worker, advancement was limited to those with a college degree. “If you’re 22 and you majored in Russian literature and you have no retail experience, you can be put in charge of people who have worked there for 20 years and know more than you ever will about your job,” he complained.

Consider Amazon. The evidence shows that buying online may result in even worse conditions for workers.

Mac McClelland for Mother Jones worked undercover in a number of warehouses where products are packed and shipped for online retailers (including one that is presumably Amazon). Warehouse employees are required to arrive early without pay, must work 12-hour days and have to commute far from the city center so Amazon can avoid sales tax. Passing through metal detectors cuts into lunchtime and low shelves mean backbreaking crouching or crawling through the warehouse to fulfill an order. A Pennsylvania Amazon warehouse was investigated for temperatures that reached 100 degrees during the summer of 2011.

And just like Wal-Mart—maybe even more so—they get away with it. They both have followed Wal-Mart’s lead in fighting employees seeking better pay, benefits and working conditions through union drives.

Last month, Gawker leaked a Target anti-union training video. “Unions want what we have,” the video proclaims, implying unions want to leech onto Target’s success and destroy the fun and friendly corporate culture. Amazon too has fought off a number of unionization drives in the U.S., and it has refused to negotiate with a German union that has demanded higher wages in German warehouses. Workers there went on strike last week.

We can’t blame the plight of the working poor on just the Arkansas behemoth, nor our thirst for everyday low prices.

Wal-Mart, Target, Amazon and other large retailers could all pay employees more without raising prices. They don’t, though, because our regulatory framework lets them increase profit instead and funnel more money to executives and shareholders. In fact, even if they passed on all the costs of living wages to consumers, prices would only rise 1.4 percent. Your $200 flat screen on Black Friday at Wally World would now be just $202.80.

But what if Target undercuts on price? Retailers will not pay their employees more unless they don’t have a choice—everyone needs to be held to the same standard.

In the end, voting with our dollars will not solve the problem. Avoiding Wal-Mart for more Prius-friendly pastures is simply not the answer.

But voting in actual elections can be. SeaTac, home to Seattle Tacoma International Airport, raised its minimum wage to $15, higher than the $10.10 Obama would like to see nationwide. Washington D.C. also raised its minimum wage after a showdown with Wal-Mart on a special big-box minimum wage aimed at the retailer and its ilk. A number of states and cities across the country seem likely to follow suit. The more that pass, the more pressure D.C. will be under to act. Some politicians, like Seattle Mayor Ed Murray, have made a higher minimum wage their key issue.

Elect more of them. Then I can eat my breakfast sausage with a clear (or clearer) conscience.

Photo via Scottish Government/Flickr (CC BY 2.0)