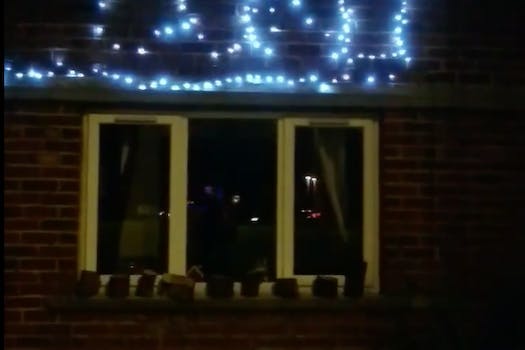 A merry prankster was arrested Monday for a vulgar message he displayed using Christmas lights.

Steve McGawley, a 43-year-old father of four from Blackpool, England, who could care less about holiday traditions, decorated his house with lights spelled out the word “c**t.”

He made his big National Lampoons-style reveal in a Facebook video on Dec. 14.

But a true artist’s work is never done. He swapped out that display for a crude image of a penis, followed by a bell and the word “end.”

After some neighbors complained, police asked McGawley to remove the lights, an encounter he filmed and posted to Facebook.

My favorite part is when he tested the officers’ patience by claiming it’s actually supposed to be a mushroom. “I’m dyslexic so I can’t tell.”

He was promptly arrested.

“On Monday, December 19, officers attended an address on Rodwell Walk following a number of complaints in relation to fairy lights on the outside of the house,” a police spokesperson told the Blackpool Gazette. “Despite attempts to engage with the occupant, the lights were not taken down and a 43-year-old man from Blackpool was arrested on suspicion of a public order offense and issued with a penalty notice for disorder.”

McGawley never took down his Christmas lights. He just rearranged them to spell out a much more appropriate message: “I’m Sorry.”