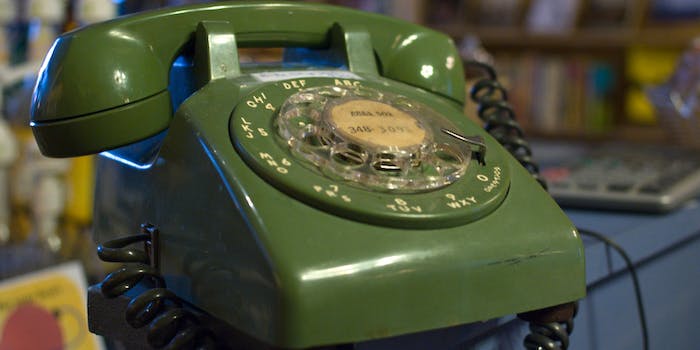 If you think anyone's actually listening to that message you just left, stop kidding yourself.

Millennials have a conflicted relationship with voicemail. Though 85 percent of people between 18-25 own a smartphone, and 86 percent of the 25-34 demographic can say the same, there’s one thing people aren’t really using their phones for very much these days: making and receiving calls. While Rachel Hood at NPR argues that millennials “hate voicemail,” and Leslie Horn wrote in defense of the possibly dying institution, the two conflicting pieces highlighted the growing disdain for voicemail in the millennial generation.

The smartphone represents a radical change in how people engage with technology, a supercomputer carelessly dropped into a pocket or left on the bedside table at night. In addition to providing telecommunications, it offers data services and applications to manage everything from scheduling to monitoring what the user is eating. The smartphone is a personal assistant, a connection to the outside world, an ever-present force in the user’s life. In fact, many view cellphones as “indispensable companions,” and they note that they would feel uneasy without their phones by their sides. Cellphones are, at least for some, becoming replacements for computers; 34 percent of smartphone owners go online mostly with their phones.

When it comes to the wide variety of functions available on a smartphone, one that’s used the least is the actual phone function. In 2012, U.K. carrier O2 found that people used phones for calls an average of 12 minutes a day, well below emailing, accessing the Internet, games, and music. The idea of using a phone as, well, a phone is so laughable that older generations of phones and those designed primarily with placing calls and texts in mind are known as “dumbphones.”

Mia Mercado at Gizmodo clings fiercely to her dumbphone, but while her interview is a bit tongue-in-cheek, it speaks to something larger. The idea of utilizing a phone to actually call people seems strange to many millennials; the last 10 calls in my own call log, excepting those made for work and stretching back over two months, are to the credit card company (a confusion about a charge) and from Kaiser, informing me that my medications have shipped. My father and I usually just encounter each other at the grocery store and make plans, although it looks like he called me on Sept. 19.

He left a voicemail.

When my phone rings, it usually triggers an abject moment of panic, because no one ever calls me, and I assume it’s a crisis. If the number is known, I’ll pick up, shocked that someone has called me—and a fair amount of the time, it is a crisis. If I don’t know the number, I’ll let it go to voicemail while my heart rate returns to normal. Whether I check it is an entirely different matter. It appears that I am not alone.

Interviewee Antonia Kidd told Hood: “I did have at one point in time like 103 unheard messages.” Like Kidd, lots of millennials feel that voicemail is often a waste of time—in the time spent leaving a message, a text could have been sent just as quickly. David Zax at MIT Technology Review shares this sentiment, and speaks to the sense of interruption that many experience when a ringing phone blares into their lives:

For most other people who know me personally, they’re much more likely to send a text message or an email. Some argue that the rise of texting and messaging betokens an era where people aren’t as good at communicating face-to-face. There may be some truth to that, but in the case of myself and my friends, I think we simply prefer texting and email because it’s more efficient—you can send a message when it suits you and respond to a message when it suits you. A phone call (which, remember, is the precursor to a voicemail) feels like an interruption—often because it is. The truth is, when I’m not reporting or dealing with something very time-sensitive, I hardly make phone calls at all anymore.

At Gawker, Caity Weaver explains her hatred of the institution of voicemail in anything but the most dire of circumstances:

My relationship with voicemails is morbid, shaped by a vague worry that every call I receive from someone could be The Last Call. I feel irritated as soon as I see I’ve got a new voicemail, but I obsessively save sweet ‘Just calling to check in’ messages from my mother, father, and grandmother, just on the off-chance they will die unexpectedly. I was recently talking to a friend who said he’d find it ‘morbid’ to keep hearing someone’s voice after they were gone. I think it would be comforting to have it to play back; a nice unrushed goodbye (as opposed to the usual ‘Gotta go, gonna lose my signal, loveyoubye’ conversation endings).

Tellingly, programs like Google Voice are attempting to make voicemail “more usable.” They do so, of course, by converting it to text, making it easy for people to quickly skim it and determine whether it’s actionable. A long, lingering voicemail or rambling call is hardly the stuff of romance for many millennials, who seem to live harried lives filled with urgency. Not so for Horn, who argued that the kindly voicemails she received after her father’s death were invaluable, and who marked the occasional drunk dial as “funny” while chronicling some of the voicemails she’d saved over the course of her life.

I see some points I agree with in her piece. I actually have my father’s birthday phone call to me from last year—which I missed because I was stalking zombies through the streets of San Francisco and had my phone on silent—saved to listen to now and then. I’d have saved a card if he’d sent one, but sometimes, he prefers the power of voice, perhaps not surprising for a poet.

And, to be honest, one of the reasons I let calls from unknown numbers go to voicemail is because if they contain threats, it’s easy to maintain a record and forward them to law enforcement if necessary. Given that I live in an era where talking about the kinds of things I do, in the kinds of places I do, exposes me to risk, it’s not unreasonable to take steps to protect myself. But there’s something grimly depressing about knowing that of the 10 messages currently saved in my inbox, one is a loving voicemail from my father, and the other nine are vitriolic, profanity-filled threats from people who somehow managed to get my unlisted number.

I’m not sure “It’s useful for saving threats!” is really a good reason to defend the institution of voicemail. For millennials at least, it appears to be on the way out, in favor of the less intrusive text or email to check in, coordinate plans, remind a roommate to pick up butter at the grocery store, or make an appointment at the doctor’s office. As millennials grow older and our ways pass on to future generations, it might just be the death knell of voicemail—and smartphones may evolve to the point where they don’t contain phone features at all, despite the name.

Perhaps our descendents will come to wonder what a “phone” is, and why they seemed to play such important roles in our lives, once upon a time.

Photo via Pen Waggener/Flickr (CC BY 2.0)