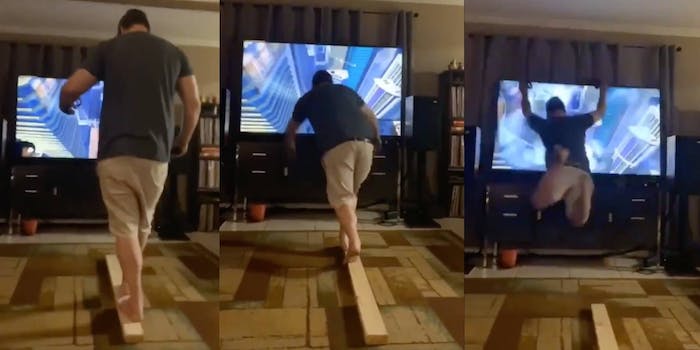 Dad accidentally yeets himself into TV while trying virtual reality

His daughter posted a video of the virtual 'flying experience' gone wrong.

A viral video shows a dad fully chucking himself at the family TV with a vengeance while playing a virtual reality game.

The dad appears to have on the popular Oculus Quest VR gaming headset and is playing Richie’s Plank Experience. In the game, players take an elevator ride to the top of a skyscraper. The goal is to walk to the end of the 80-story-high plank. Players who complete the mission can experience “the most exhilarating flying experience ever created,” according to the game’s description.

That exhilaration must be what VR dad was after when he yeeted himself into virtual traffic. Not gonna lie, for a second there, VR dad does actually look like he’s skydiving.

In the background, you hear his family egging him on. “He did it!” one person says before audibly gasping and just barely letting out an “Oh my god.”

The video clip of VR dad ends with a picture of the family’s now very broken flat-screen TV filled that only displays glitches and vertical lines. I doubt that TV will ever screen another virtual reality game ever again.

“Did you try to turn it off and on again?” trolled one commenter.

Some people are worried about VR dad’s mental health. Listen, it may be a virtual reality game, but the man absolutely launched himself off that plank with seemingly no virtual parachute to save him.

But it seems VR dad isn’t the first to get a little too into the game.

Some people are drawing comparisons between VR dad and other iconic pop culture scenes.

Others turned the dad into the “jumping to conclusions” meme.

One Twitter user has a theory to put the “but why?” questions to rest.

“This man wanted a new TV,” they stated.