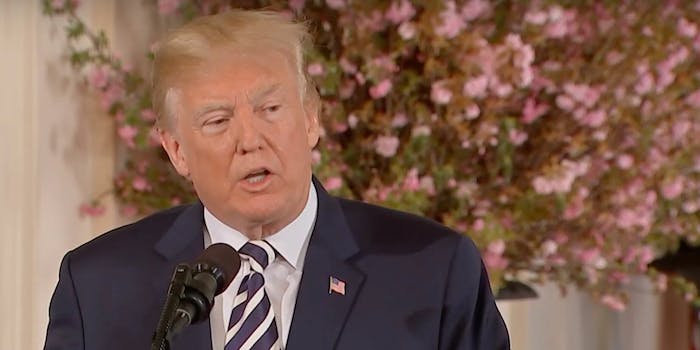 The likeness is real.

Dolores Leis Antelo lives on a farm in rural Spain and doesn’t own a smartphone, but a picture of the woman is circling the internet for one reason—the woman looks like Donald Trump.

“My photo seems to have traveled far,” Antelo told a local newspaper called La Voz de Galicia last week. “I say it is because of the color of my hair.”

The likeness originally went viral after someone shared a picture of her after an editor at La Voz de Galicia shared her image to Instagram.

Newsweek reported Antelo also said she is “currently struggling with planting potatoes in the dry climate.” The magazine attributed the dust from the climate to the “orange hue” of her skin.

As you can imagine, the jokes are already rolling in on Twitter.

'It is because of the color of my hair' says Spanish woman who looks like Donald Trump https://t.co/tz1JF8QFsG pic.twitter.com/LQH9PmDsM4

Hands are too big pic.twitter.com/fgKihufpGY

Can we get her to fill in for him? Seriously.

Seems like they're both quite adept at grabbing hoes.

It *might* be more than just the hair, dear. https://t.co/jdDDDAR3sm

According to Newsweek, Antelo has spent her whole life in Cabana de Bergantiños, an autonomous community in northwestern Spain, and she has never been interested in the digital world.

“I have never been curious to have one but I do look at what my daughters show me, Antelo said. “They say this picture will make me famous but I don’t get why.”

Antelo may not share Trump’s lifestyle, but pop a headband on the president and their likeness is uncanny.