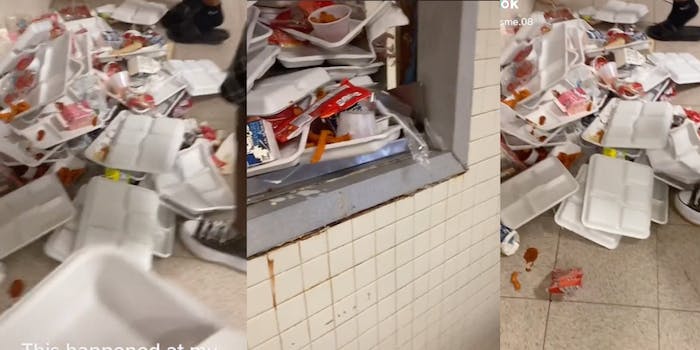 'The trash compounder was full'

A TikToker has exposed bleak conditions at their school with heaps of lunch trays being thrown in the hallways, making a mess.

TikToker @heyythatsme.08 shared a video on Friday, showing students throwing their lunches on the floor next to a clogged up trash compounder.

The video shows the person behind the camera walking up to the pile of food waste, and other students dropping their used lunch trayson it.

“You bitches is crazy,” someone is heard saying.

“The trash compounder was full so the students had no choice but to put their trays next to it,” the TikToker wrote in an update on Monday evening.

But many were appalled at the behavior—especially given the labor the cleaners would have to do.

“Someone’s parent has to clean that up,” wrote one user.

“I believe that all schools should start have the students start cleaning the school,” wrote one person.

It’s unclear where this school is located. The Daily Dot reached out to the TikToker for further details, and will update the report if they respond.