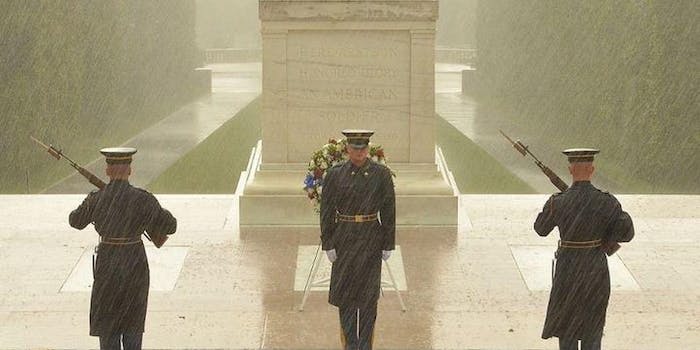 Although the Old Guard will protect Arlington National Cemetery through Hurricane Sandy, a Facebook photo of the soldiers was actually taken in September.

But while The Sentinels at the Tomb of the Unknown Soldier are indeed keeping watch through Hurricane Sandy, the Facebook users sharing the photo are mistaken about its context. According to the official Twitter account of the Old Guard—the U.S. Army’s 3rd Infantry Division, charged with keeping a soldier posted in front of the tomb at all times—that photo was actually taken in September.

That doesn’t mean that the Tomb, which houses the remains of an anonymous U.S. soldier who died in France during World War I, will be abandoned during Hurricane Sandy.

“The Old Guard has guarded the tomb every minute of every day since April 6, 1948. Today will be no exception,” reads a statement The Old Guard posted to its official Facebook account Monday. That post went relatively unseen, having been shared 713 times.

The Old Guard also posted its own, current photos to its Facebook page, which show far less rain than the one taken in September, at least for the time being.