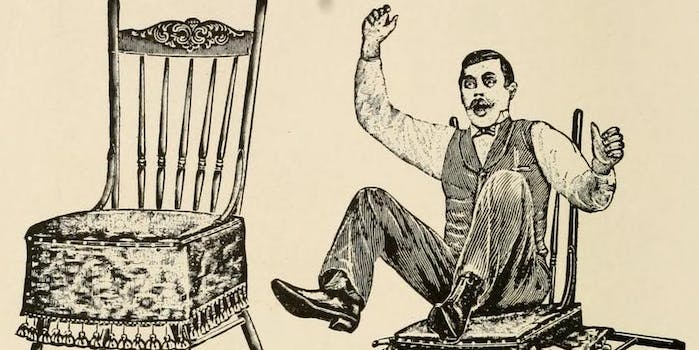 George W. Bush once famously said, “Fool me once shame on… shame on you.  Fool me… you can’t get fooled again,” or something like that.

Anyway, here’s a salute to the times the hoaxsters won this year. Some were funny, some were jerks, some were making a point, and more than a few were trying to make a buck. Sometimes we were skeptical, and other times we bought it without a second thought. But the one thing everyone on this list has in common is that they got caught (or in some cases exposed themselves). Kind of makes you wonder who we didn’t catch.

This video looked way too slick and perfect to be anything but scripted, but it’s hard not to trust a smiling Adam Levine.

“Only the grooms knew in each case,” a rep for the band told Entertainment Tonight. “However they disclosed it to their bride and the wedding party, we’re not sure, but they all wanted it to be as equally a surprise as we did. They had stages set up for their actual wedding band already. All we did was some simple continuity changes to match each one as best we could.”

Well, it turned out that whole thing was a big lie, and truth came out when people started recognizing the actors at these “wedding parties.” Nice try, Maroon 5—stop tugging at our heart strings.

Now here’s a guy who did it right. By inserting his own footage into this newscast and uploading it to YouTube, director/actor Andrew Bowser was able to fool millions of people into thinking he was the world’s most tweaked-out Satanist. Other than the fact that this guy is too great to be believed, it’s hard to tell from the video that it’s fake. However, it didn’t take Daily Dot’s Eve Peyser much digging to find Bowser’s other videos, some of which are almost as hilarious as the gem above. Bogus weight loss claims are all over the Internet, so what makes this one special? Perhaps that Johannes Bohannon is an actual scientist who went out of his way to help us understand how distorted facts can help a company, person, or group, claim almost anything it wants. Nothing Bohannon and his collaborators published was a lie, yet chocolate almost certainly doesn’t accelerate weight loss. Here’s how he explained it in his article, which is worth reading in its entirety.

Here’s a dirty little science secret: If you measure a large number of things about a small number of people, you are almost guaranteed to get a “statistically significant” result. Our study included 18 different measurements—weight, cholesterol, sodium, blood protein levels, sleep quality, well-being, etc.—from 15 people. (One subject was dropped.) That study design is a recipe for false positives.

Think of the measurements as lottery tickets. Each one has a small chance of paying off in the form of a “significant” result that we can spin a story around and sell to the media. The more tickets you buy, the more likely you are to win. We didn’t know exactly what would pan out—the headline could have been that chocolate improves sleep or lowers blood pressure—but we knew our chances of getting at least one “statistically significant” result were pretty good.

Bad science plus some Web savvy led to the results being published all over the web, even on major sites like The Huffington Post and Cosmopolitan. The lesson here is big, and it’s easy to see how everyone from politicians to major corporations can use this mathematical “trick” to their advantage.

4) Meth in the attic Moving onto something that’s a little less scary and a little more fun, we have this story about a charming couple cooking methamphetamine in the attic of a Walmart. The story claimed that the two had been “living in the lap of luxury” in a Tennessee Walmart for over two years, and were only caught when they were overheard having sex on a queen sized bed they’d stolen from the store.

This one was really only picked up by “news” sites even sketchier than the couple in the photos. Still, it was just too good a headline, and it was passed around enough to hit the number one spot on Snopes‘ “Hot 25” list of urban legends.

Grade: D+ (the plus is for those amazing mugshots) This one almost got yours truly. I was five seconds away from filing an article I’d written about “Rumblr,” an app that was supposedly like “Tinder for fighting.” Would-be pugilists could swipe right on the faces the didn’t like and meet up at some agreed-upon location to punch each other’s lights out. Luckily, a last minute double-check turned up a Vice article that revealed the hoax. Unluckily, that meant I had to completely rewrite.

Screw you, Rumblr. I’ll meet you in the alley. Another story that was mainly picked up by fake news sites. This one tells the story of “Justin Green”—a man from either Atlanta, Georgia, or Alberta, Canada, depending on which version you read—who won the lottery, then died from complications that arose after he had his testicles plated in gold.

The above picture, which accompanied all the stories, actually depicts Polish rapper and MMA fighter Paweł “Popek” Rak, who to be honest seems entirely newsworthy in his own right.

In what had to be one of the worst promotions of the year, digital marketing agency Sunny Coast Social Media created this video to promote Holiday Mooloolaba, a company that finds rental properties for people vacationing in Australia.

The video shows us a young french girl named “Natalie” who spins a tale about a one-night stand she had while staying in Mooloolaba, Australia. After telling us that she had an “amazing time,” she goes on to say that she met a “really cute boy” and that it was “love at first sight”—but oh, no! she lost his number and now she’s pregnant! Leaving her with no other option but to record a YouTube video and hope her lost love finds it, like a message in a bottle, set adrift on the Internet sea.

Once they video racked up enough hits, the title was changed and an annotation stating “I found him, click here to watch!” was added. Clicking on that link leads to another video featuring what can only be described as the slimiest dude ever, telling you it was all a scam, and that he’s sorry—but also that he plans to do many more video likes this.

No, this doesn’t refer to the guy in the previous hoax. Phuc Dat Bich was just some poor schlub whose account kept getting deleted by Facebook because they didn’t believe that was his real name.

And it turns out it probably wasn’t.

The person behind the hoax told The Guardian that his real name was Tin Le, and that he lived in Melbourne, Australia. He claimed he made the whole thing up as a joke, and as a way to point out the flaws in Facebook’s naming policy. When asked for verification he replied that he was tired of the prank and reportedly said, “Well, you’ll just have to have faith and run with what you have.”

Maybe not the best advice. People are getting used to some pretty insane deals on Black Friday, but this one must have seemed excessive to even the most gullible of shoppers. Half off everything in the store? And it’s good until the end of the year?

Representatives from Target were quick to let people know that this was a fake. Clicking on the link only took you down a wormhole of endless surveys and broken promises.

If you really want to see some insane deals at Target, we much prefer the work of this guy, who, in an only slightly less believable offer, promises shoppers a free falcon.

Despite some fairly obvious problems, as pointed out by Daily Dot’s Gabe Bergado, people were sharing this story like crazy. Maybe it was the far-fetched nightmare scenario, or the way everybody clapped as the guy runs from the room. But for whatever reason, this video was all over the internet for weeks.

As it turns out, the whole thing was the work of an internet “prankster” (read: annoying jerk) who goes by “MrJayOne.” Here’s the original video, which includes the same guy doing a bunch of stuff that’s way less funny.

It was around 4am when I was wrapping this article up. I was in the middle of trying to figure out what grade to give “Phuc Dat Bich” when I got a Facebook message from a friend wondering what I was doing up so late (his schedule is pretty much impossible to predict, and a message from him could pop up at any hour of the day). When I told him I was working on an article about Internet hoaxes he immediately responded:

I asked him to explain, and here’s what he had to say:

The great hoaxes of the past involved infiltrating the few trusted media outlets and its constituent credibility to dupe a large number of people; now, with everyone having equal access to media distribution the idea of credibility of any given source is nearly obsolete and idea of an “internet hoax” almost redundant.

Not bad for 4am (although I guess it was an hour earlier in Chicago).

All of which reminds me of another quote:

The internet has made us all experts and so eradicated the expert. Made us all famous and so eradicated fame. In this way, there is no more journalistic trust than the trust we can put in our fellow man. Democracy, fully realized, is a nightmare of freedom wherein we all are at each other’s mercy.

*Not really, but see how easy that is?