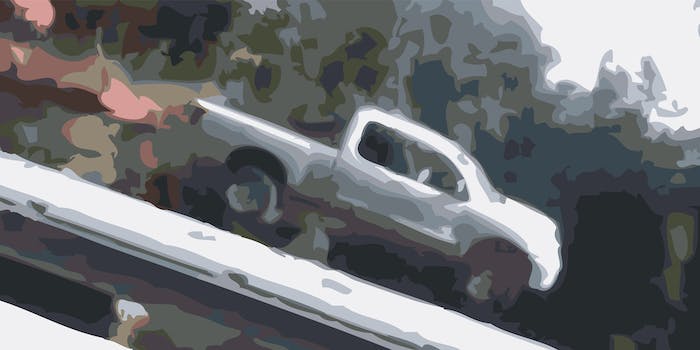 Believe it or not, the craziest vine of the year wasn’t staged

"Did I just witness this no f*cking way" wrote the user, who somehow captured the footage on Vine.

In a horrible, astounding, once-in-a-lifetime shot, a Michigan woman captured a devastating automobile accident on Vine.

It’s no fender-bender. In Alexandria Stack’s short, a pickup truck, towing a riding lawnmower in a trailer, ramps off of an elevated Interstate median at a high speed, then crashes below.

“Did I just fucking witness this no fucking way,” Stack, whose Twitter bio indicates she’s a student at Western Michigan University, wrote.

Police confirmed the driver was a 59-year-old man who sustained serious injuries as he drove off of I-96. He was conscious when police arrived, they said, and is currently in the hospital.

UPDATE: Stack shared her story with the Daily Dot:

I was driving to Kalamazoo for a dance team practice and my window was down because the air conditioning in my car was broke. I felt a piece of grass hit my arm sharply. If it wasn’t down I probably wouldn’t have heard the car on the median nor would I have felt the grass hit my arm. I thought it was just a car being stupid trying to get to the other side of the highway without getting off on an exit. I decided to record it because it wasn’t something you see everyday and it was kind of funny. I noticed the cars in front of me and on the other side of the highway slowing, and i did the same. As I was trying to get the app open the car began to hit signs in the median and the truck was getting very high in the air probably going about 70mph. I started recording as soon as I could and only got 3 seconds of video. As soon as the car disappeared I got off on the exit and called the police. The police already knew what had happened. It was the most terrifying thing I had ever seen.